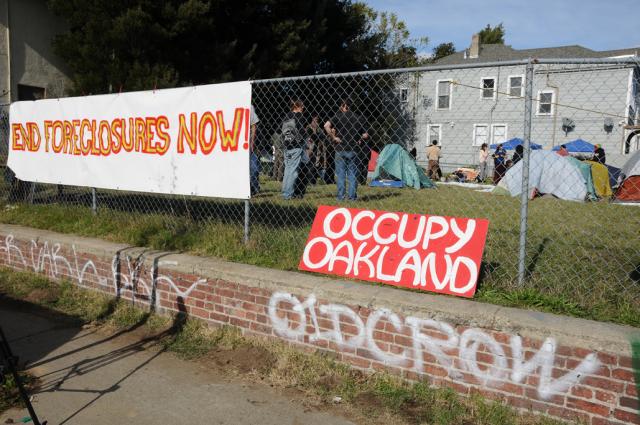 Vultures! Vultures!” a middle-aged African American man yells at a Caucasian male in an expensive leather jacket and white button-down shirt. The man holds a clipboard with real estate listings—identifying him as an auctioneer.

A crowd of more than 100 has assembled on the steps of the Alameda County Courthouse in Oakland as the auctioneer attempts to read out the list of properties to be auctioned publicly. But the crowd starts up a chant of “Banks got bailed out, we got sold out!” Musical instruments are played loudly, signs and banners are waved about, and the auctioneer is drowned out with hisses and jeers. The auctioneer endures the hazing for a few minutes, makes a whispered call on his cell phone, and ducks into the courthouse building. A long line of protestors immediately forms, preparing to follow him inside. A young African American male holds up an “Occupy Oakland” sign.

The auctioneer is told by a deputy that he cannot conduct his business in the building and there ensues a game of cat-and-mouse between him and the crowd as he attempts to conduct his business at a different spot outside the courthouse and the crowd splits up to hound him wherever he goes. Finally, the auctioneer leaves after another whispered phone call—presumably to a bank official—and the crowd moves on to another auctioneer, also identified by his clipboard. Having witnessed the crowd’s treatment of a fellow auctioneer, he leaves without attempting to read out the names of listed properties. A third auctioneer is also encircled and quickly shouted down.

In a little over an hour, the auction that day is cancelled and the bank agrees to discuss a loan modification with Nell Myhand, whose home was being auctioned. After two years of not receiving a response from the bank, she declares the action a “victory.” 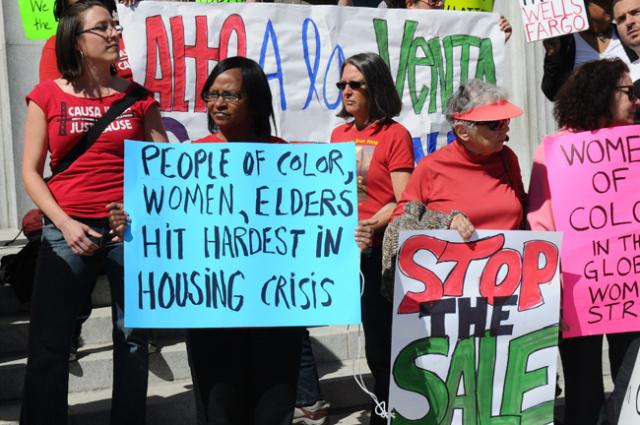 Foreclosures Target Immigrants, Elderly, People of Color
Foreclosed properties auctioned on courthouse steps have become a sign of the economic times throughout California and the United States. In Oakland alone, more than 35,000 homes have been lost to foreclosure since 2007.

This particular foreclosure auction, however, was noteworthy for the irony behind it. The homeowner, Nell Myhand, is a veteran community organizer and housing counselor who had been actively helping other homeowners fight precisely this type of occurrence.

Myhand had bought her East Oakland home with her partner, Synthia Green, over a decade ago when they were both fully employed. But then, Myhand had to take responsibility for the full-time care of her mother who suffered from dementia and Green was forced into early retirement from her job as a teacher because of a stroke. Even as their income declined, the monthly mortgage payment on their modest two-bedroom home ballooned to over $2100. Myhand made two attempts to get the loan modified but her request was denied by the bank. Then on March 8—International Women’s Day—Myhand and Green’s home was scheduled to be sold to the highest bidder on the steps of the Alameda County Courthouse.

If the bank expected the proceedings to go smoothly and for Myhand to go quietly, they were gravely mistaken. Myhand enlisted the help of Causa Justa/Just Cause, Global Women’s Strike, and the Occupy Oakland Foreclosure Defense Committee, who mobilized the supporters on her behalf, forcing the bank to cancel the auction and talk to Myhand.

At an impromptu press conference following the courthouse action, Myhand called for a national moratorium on foreclosures, saying: “It’s time for them to stop putting us out of our homes and leaving our homes empty and us homeless!”

Women of color, she noted, are 256 percent more likely to be saddled with a sub-prime loan than white men. Adding that in Oakland, “foreclosures are concentrated in three zip codes that have the highest concentration of African American residents, monolingual Spanish speakers, and elders.” The banks have “charted a strategy to transfer wealth from those of us who have less to those of us who have more. And we’re finished with that!”
Actions against foreclosures show the banks that “it’s not business as usual,” Myhand emphasized. 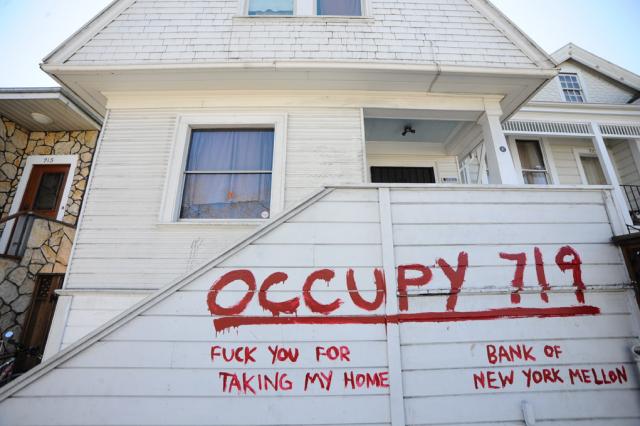 Foreclosed Households: 20 Million and Counting
As many as 20 million American households have been foreclosed since 2006, when the crisis began. Many of the foreclosures are directly attributable to sub-prime loans, which generated trillions for the banking industry and resulted in hundreds of billions in lost wealth for communities of color.

In cities like Oakland, where the foreclosure rate in 2011 was more than double the national average (according to RealtyTrac.com), there has been an overall negative effect on property values as a whole. Foreclosed, unoccupied properties attract blight, squatters, drugs, prostitution and violent crime. Yet banks are rarely held liable for the $1,000-per-day fee cities can lawfully charge for blighted properties. Additionally, foreclosures have a huge impact on emotional and physical well-being. A joint study conducted in 2011 by Causa Justa and the Alameda County Public Health Department found that foreclosed residents are twice as likely to experience stress, depression or anxiety.

The situation will likely worsen before it improves. In the next three years, as many as 1.7 million more Californian households face foreclosure. A $25 billion settlement against the five largest mortgage servicers recently accepted by state Attorneys General is not expected to effect a significant reduction in the number of foreclosures before 2015. Moreover, the settlement excludes Freddie Mac and Fannie Mae, which own 80 percent of all American mortgages and more than 60 percent of California’s home loans.

The economic reality of the situation and the corresponding lack of compassion toward homeowners by financial institutions—many of whom benefited from the bailouts, which they used to bankroll foreclosures—became a prime catalyst for Occupy Wall Street and the affiliated Occupy movements that sprang up in 2011. For organizations like Causa Justa and the Alliance of Californians for Community Empowerment (ACCE), who were already battling foreclosures, the timing was serendipitous.

Causa Justa Executive Director Maria Poblet finds considerable alignment between Wall Street critiques and campaigns for bank accountability. And ACCE organizer Grace Martinez points to the economic connections between job losses, service cuts, deficits, spending reductions, and the lack of funds for education. “A lot of the [university] regents are also part of the banks,” she says. 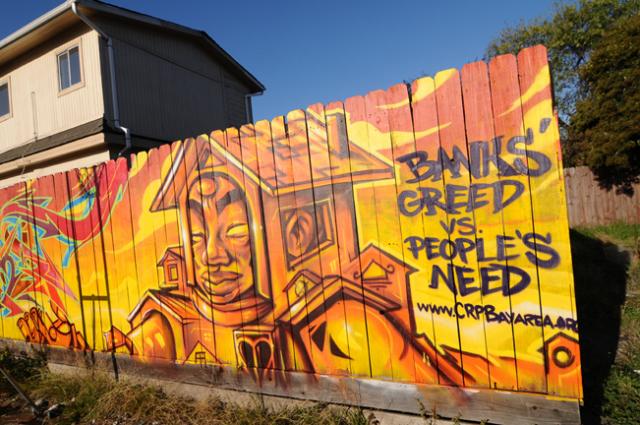 Grassroots Network Spreads Far and Wide
When Occupy Oakland started, it was about housing, Myhand recalls. Months later, it still is, as evidenced by the spray-painted message on one foreclosed West Oakland home: F_ck you for taking my home, Bank of New York Mellon.

Despite the closure of the Occupy encampments, the momentum against foreclosures appears to be building. Protests against financial institutions and occupations of abandoned or foreclosed properties are becoming more commonplace in Oakland and other cities. Increasingly, nonprofit organizations are teaming up with foreclosure victims, neighborhood activists, Occupy protestors, labor unions, policy advocates, and legal experts to “build a movement bigger than any one campaign or organization,” says Poblet.

A group calling itself Occupy Our Homes has started tracking anti-foreclosure protests and actions against banks in cities across America, including Detroit, Washington, Riverside, Oakland, Los Angeles, Petaluma, Sacramento, Minneapolis, and New York.

Take Back the Land has been advising Occupy Oakland and activists in other cities on foreclosure defense strategies.
Occupy Atlanta has been garnering national news headlines with a succession of actions against Chase bank in the area.

In Seattle, five activists who chained themselves together at a Chase bank to protest foreclosures were found “not guilty” of criminal trespass last March—a hint, perhaps, that the judges were not turning a blind eye to the injustices of banks.

There is now increasing evidence of international solidarity around anti-foreclosure movements. Swiss-based aufbau.org recently announced an action against Chase in Zurich in support of Myhand.

While banks continue to advertise heavily on American television, grassroots networks relying on social media and independent news outlets have played a big role in spreading the anti-foreclosure message. Using Facebook and YouTube, they have publicized cases like that of Katie Mitchell, an elderly African American woman from Oakland who was granted a loan modification after the Foreclosure Defense Committee and ACCE staged an action on her behalf inside Union Bank.

These actions send a message that protest tactics are effective, says Boots Riley, founder of political hip-hop outfit, the Coup, and an active Occupy Oakland participant. “When people think there’s a definite way to make a change in the course of actions, they respond.”

Assessing the ‘Occupy Effect’
According to Riley, Occupy has shown that the banks do not have a moral high ground: “People are willing and supportive of shutting down banks, shutting down home auctions, moving people back into foreclosures.”

Poblet points out that the movement reinforces “what the working class communities of color we work with have been saying for a long time—the problem of foreclosures wasn’t caused by lack of personal responsibility on the part of homeowners; it’s a symptom of a systemic problem caused by the big banks and financiers that control our economy and our political process.”

Where Occupy has been a game-changer, Martinez believes, is in “unifying people beyond constituencies.” Residents of San Francisco’s Bayview and Excelsior districts, for instance, were not previously active on housing issues.

Now the Occupy message may even be trickling upwards into state and local politics. During a New America Media forum on the 2012 election issues in March, media experts attributed high poll numbers for a proposed “millionaire tax” in California in part to the 99% meme resonating with the public. Moreover, in some jurisdictions, local officials are showing a new willingness to challenge financial institutions.

Poblet credits movement pressure on city governments with furthering discussions over bank divestment in Oakland and San Francisco and draws attention to Supervisor John Avalos of San Francisco’s Excelsior district, whose poll ranking as a mayoral candidate rose from fourth to second after he introduced legislation in favor of divestment from big banks and started a committee to explore the possibility of creating a municipal bank. Poblet attributes it “in great part [to] the alignment between his policy platform and the demands of the Occupy Wall Street movement, which many voters supported. I think that’s an example of Occupy politics trickling up!”

In Oakland, City Council Member Jane Brunner recently co-authored a proposal to explore divesting the city’s $300 million in municipal assets from Wells Fargo. She undertook the action because the bank has not responded to the city’s request for numbers on loan modifications and foreclosures in Oakland. “We’re trying to be creative about what we can come up with,” she says, adding that “the 99% message has changed the dialogue nationally” around foreclosures. Yet, Brunner maintains that Occupy Oakland organizers have not worked directly with any elected officials, making it difficult to determine the amount of political capital their activism has generated.

ACCE and Causa Justa, however, have clearly received a visibility boost from their alignment with Occupy, which helps their ongoing efforts at policy reform. That, says Martinez, is the endgame strategy. “To address systemic change, you have to think in terms of policy.”