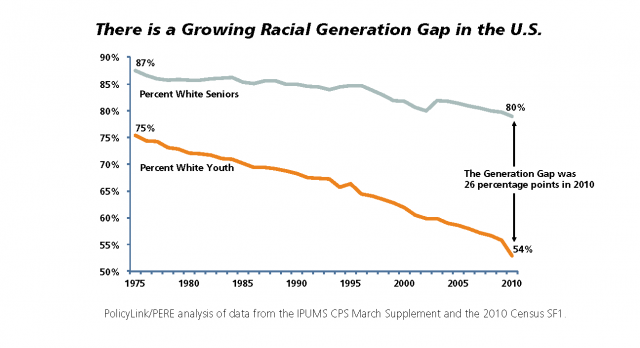 The nation’s economic model is broken and the problem is not just the recent downturn, as pressing and important as that may seem. Over several decades now, economic growth has slowed, racial and income inequality has spiked, and the middle class has withered. The United States needs a new strategy to bring about robust growth that is widely shared by all who live here.

The nation is undergoing a major demographic transformation, in which racial and ethnic groups excluded in the past are becoming a larger portion of the population. The new growth model must embrace these new demographics and make the necessary investment for the next generation to reach its full potential.

By 2042, a majority of the population will be people of color, which is the reason for the growing racial gap between America’s oldest and youngest—whites make up 80 percent of seniors but only 54 percent of those under 18. Too many elders and decision-makers do not see themselves reflected in the next generation and they are not investing in the same educational systems and community infrastructures that enabled their own success. The racial generation gap not only puts youth of color at risk, it threatens the wellbeing of all children and the nation as a whole.

Racial and Economic Inclusion Give Competitive Edge
Reducing inequality, growing the middle class, and turning today’s youth into tomorrow’s skilled workers and innovators is critical to restoring America’s growth and competitiveness. In this time of demographic transition, our leaders must address the wide racial disparities in educational outcomes, income, health, wealth, and employment that are dragging down the economy and holding back its potential.

Reducing Inequality Promotes Growth
Increasingly, economists are finding that inequality is not only bad for those at the bottom of the income spectrum, but that it places everyone’s economic future at risk. Recent studies suggest that inequality hinders growth and that greater economic inclusion corresponds with more robust economic growth.

Diversity is an Overlooked Economic Asset
America’s transformation into a world nation within its borders can help it connect to—and succeed in—the global economy. Diverse perspectives help solve problems better and can foster the innovation needed to grow the economy. Diverse communities also create new markets: by developing new enterprises and providing a significant consumer base for existing businesses.

Skilled Workforce is Critical to Securing Future
The jobs of the future will require higher levels of skills and education, but our current educational and vocational systems are not adequately preparing people for those jobs. Forty-five percent of all jobs in 2018 are projected to require at least an associate’s degree, but among today’s workers only 27 percent of African Americans, 26 percent of U.S.-born Latinos, and 14 percent of Latino immigrants have achieved that level of education. Closing the wide and persistent racial gap in educational attainment is the key to building the strong workforce that will become the backbone of our economy. 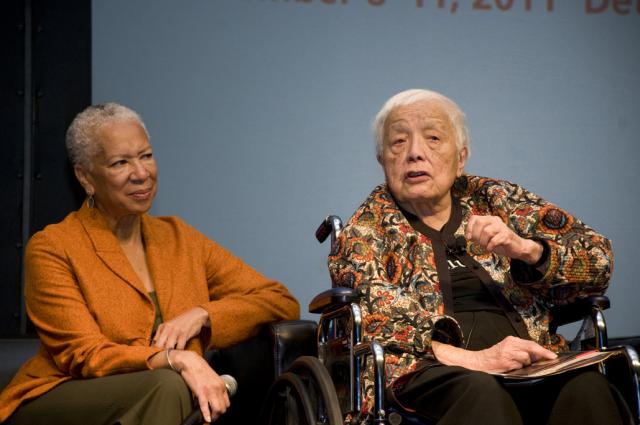 Implementing an Equity-Driven Growth Model
A growth model based on equity would grow new jobs and bolster long-term competitiveness while ensuring that all—especially low-income people and people of color—have the opportunity to help create and benefit from that growth. Below are three promising strategies for linking vulnerable populations to good jobs and career pathways while at the same time, strengthening their local and regional economies in three key areas:

1. Rebuilding Public Infrastructure
High-quality public infrastructure—such as, roads, transit lines, schools, bridges, and sidewalks—is essential to fostering competitive regions. And public investment in infrastructure projects is one of the best ways to create jobs and get dollars flowing within the economy after a downturn. Infrastructure projects that maximize job opportunities for the people and communities most in need of them and create opportunities for local and minority-owned businesses, promote equity and boost growth at the same time. A case in point is St. Louis, Missouri, where the Department of Transportation (at the urging of Metropolitan Congregations United and the Transportation Equity Network) agreed to devote 30 percent of the work hours on a $500 million highway project to low-income apprentices and one half percent of the project budget to job training. Other cities and states have adopted similar workforce provisions and advocacy groups are now working to incorporate a construction careers policy in the next federal transportation bill.

2. Growing New Businesses and Jobs
Small businesses create two out of every three jobs in this country and are critical to providing economic opportunities for low-income and communities of color. Providing training support and linking entrepreneurs to larger-scale opportunities—in markets, sources of capital, and economic development and growth strategies—can encourage more start-ups and help existing small businesses grow, so that they generate more jobs for those who need them most. For example, since 1993, the Neighborhood Development Center in St. Paul has collaborated with community organizations to help residents start their own businesses. The center—through its seven business incubators—offers a 16-week entrepreneurship course and follows up with start-up and expansion loans, ongoing business support and technical assistance, and low-cost commercial space. Five hundred graduates are currently operating businesses, sustaining 2,200 jobs in the community.

3. Preparing Workers for Future Jobs
The nation needs an education and workforce training system that can equip current and future workers with the skills they need to thrive. Ensuring that all workers—including those who face high barriers to employment—can get the advanced training or education needed to access “middle-skill” jobs that pay family-supporting wages and offer career growth is critical. For low-income children who face the greatest risk of not succeeding at school or work, the preparation must begin before they enter kindergarten, and last throughout their careers. The Chambers of Commerce in Santa Ana and Los Angeles have partnered with their local school districts to bridge the growing gap between the education levels of their diverse youth populations and the needs of their employers. Santa Ana created a jointly administered high school that trains students for careers in six growth industries—automotive and transportation, engineering and construction, global business, health care, manufacturing, and new media. Los Angeles offers summer jobs and internships with thousands of employer partners.

The Backlash: Real and Perceived
Rapid demographic change inspires a mix of reactions—from fear and anxiety, to indifference and ambivalence, to hope and optimism. Harsh anti-immigrant laws of the past several years attest to the fear that arises when communities face a rapid influx of newcomers from distant places. The Migration Policy Institute found that the growth rate of the immigrant population was the biggest predictor of whether a locality considered restrictive immigration legislation.  But a recent survey conducted by the Applied Research Center suggests that it could be a small number of vocal pessimists who ignite fiery public debates about racial change. Most of the 2,700 survey respondents did not have strong feelings one way or the other about changing demographics, but the pessimists were the most likely to express their opinions.  These survey results point to the need for a much more vocal and active majority. There are many promising examples of multiracial organizing and coalition building. In Prince William County, Virginia, white mothers and police officers joined forces with Latino immigrants in 2007 to successfully overturn a regulation that would have required police officers to question people they had “probable cause” to believe were undocumented immigrants. Activists in Portland, Maine—a predominantly white town that has seen an influx of immigrants in the past decade, particularly African refugees—came just a few points away from passing a law to allow non-citizens to vote in local elections in 2010.

Wanted: The Right Movement
It will take a real social movement to bring about the social, cultural, market, and political shifts needed to create an equitable and inclusive economy. Major shifts in policy and politics are needed at every level—from local job creation to national economic policy. Bringing about those shifts will require sustained advocacy and diverse leadership that spans generations, sectors, and issues. New champions for equity-driven growth—even from the unlikeliest quarters—must be allowed to emerge. What is clear is that the task of creating jobs and opportunities— for everyone—requires the nation’s full attention. We need to begin a new national conversation about equity driven growth that is broad and open. Honest debates about how to move ahead are critical because no one group has all the problems and no one leader has all the solutions.

In order for growth and equity to come together, everyone will need to stretch out of their comfort zones. Growth advocates will have to stop viewing equity as something that trickles down from their efforts to attract and grow businesses, and start recognizing that racial and economic inclusion will help them achieve their primary goals of growth and competitiveness. Equity advocates, who have traditionally focused on how the benefits of growth are divvied up, will have to concentrate more on generating job growth and choose strategies that work with market forces to reach their equity goals.
As the country grows ever closer to becoming a people-of-color majority nation, we must act quickly to prepare for the new future. Equity is the superior growth model which holds the promise of prosperity—for all.

Young Workers at Risk
Today’s young workers will form the backbone of the next economy but the newest entrants to the world of work have been particularly hard hit by the economic crisis and are at risk of never reaching their potential. Recent college graduates—particularly young blacks and Latinos—are struggling to find their footing in the workplace. Among college graduates under age 25, unemployment rates are 15 percent for African Americans, 14 percent for Latinos, and 9 percent for whites.  Many of today’s college graduates are starting further behind than they ought to because they take positions with lower education requirements and lower salaries.  This is not just a short-term setback. Entering the workforce during a recession can depress earnings for 10 to 15 years.
Faring much worse is the growing legion of disconnected youth. Nearly six million young people aged 16-24 are neither working nor in school. This is both the highest absolute number and the highest share of youth that are disconnected over the entire 24-year period for which, data are available. These disconnected youth are disproportionately youth of color (51 percent), compared to 40 percent of all youth in this age group. But the fact that 49 percent are white highlights the reality that all youth are at risk. Such high numbers of young people without jobs and options are a source of social instability—for the youth themselves, for their families, and for society. Lacking a successful work experience by the age of 25 increases the risk of lifelong poverty and disconnected youth are also more likely to end up in the criminal justice system, exacerbating an already downward-spiraling situation and imposing a host of societal costs.

Angela Glover Blackwell is the founder and CEO and Sarah Treuhaft is an associate director of PolicyLink. Manuel Pastor is a professor of American Studies and Ethinicity at the University of Southern California. This article is based on a report published by PolicyLink in collaboration with the University of Southern California’s Program for Environmental and Regional Equity. The full report is available at www.policylink.org/EquityIsSuperiorGrowthModel.