"If racial exclusion and inequity are at the root of the problem, then inclusion and equity must be built into the solution." - Rinku Sen 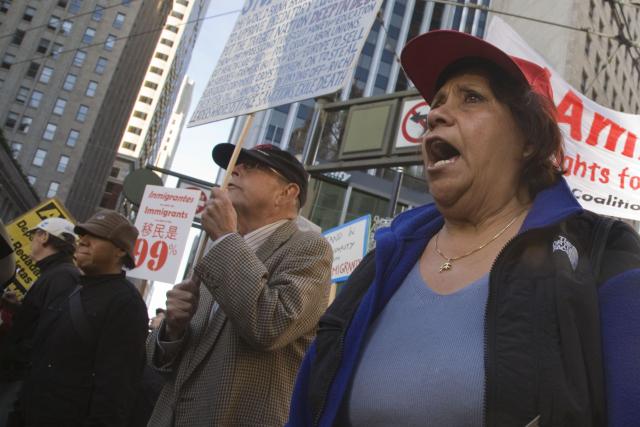 We must now move from questions of representation to ask: How can a racial analysis, and its consequent agenda, be woven into the fabric of the movement? We need to interrogate not just the symptoms of inequality—the disproportionate loss of jobs, housing, healthcare, and more—but, more fundamentally, the systems of inequality, considering how and why corporations create and exploit hierarchies of race, gender, and national status to enrich themselves and consolidate their power. As the New Bottom Line campaign has pointed out through a series of actions across the nation launched the same week as OWS, the subprime lending practices of Bank of America, JPMorgan Chase, and Wells Fargo have devastated communities of color. A 2009 study found that 85 percent of those hardest hit by foreclosures have been African American and Latino homeowners.

If racial exclusion and inequity are at the root of the problem, then inclusion and equity must be built into the solution. OWS has resisted making specific demands, but local groups are taking up campaigns and actions. The challenge and opportunity of this moment is to put these values at the center of their agenda.

The signs are promising. In Boston, Occupiers joined a march that protested gentrification and financial abuse from a racial justice standpoint. In Oakland, the organization Just Cause::Causa Justa has inserted an anti-discrimination agenda, illustrated by a beautiful poster by artist and activist Melanie Cervantes reading, “Somos El 99%,” which is a prominent feature of the encampment there. (The poster exists in other languages, too.) New Bottom Line has asked Occupiers to make pointed, tangible demands of regulators and banks. Occupy Los Angeles has taken up actions supporting homeowners in the midst of foreclosure. A hearty response from other cities would go a long way toward legitimizing OWS as a movement that recognizes the fundamental role of racial discrimination in shaping our economy.

As some Occupy cities are demonstrating, addressing race is far easier when there is already a history of white activists and those of color advancing common goals. In Flagstaff, Arizona, a city where activists have worked alongside Native communities for years, the local Occupy website features calls to resist a fake-snow-making scheme on a mountain sacred to Native tribes, as well as a plan by Senator John McCain and Representative Paul Gosar to reinstate uranium mining around the Grand Canyon. At Colorlines.com, which has covered the role of race in the Occupy movement, one commentator offered the example of Occupy Los Angeles—a city with a long history of collaborative economic justice campaigns with a clear race angle—as a model to emulate. “The LA folks seem to be able to reconcile how to fold [racial], monetary, and social issues all into their messages,” she wrote.

The Occupy movement is clearly unifying. Centralizing racial equity will help to sustain that unity. This won’t happen accidentally or automatically. It will require deliberate, smart, structured organizing that challenges segregation, not only that of the 1 percent from everyone else, but also that which divides the 99 percent from within.

Rinku Sen is president and executive director of the Applied Research Center, and the publisher of Colorlines, from which this article is excerpted.