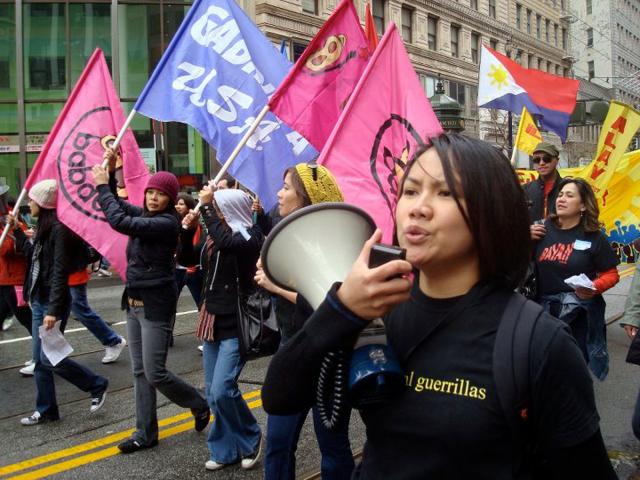 San Francisco is a global city, famous for its progressive values. Some consider it a “bubble,” a wonderland beyond the reach of corporate and right wing forces. But the dirty secret behind the city’s progressive image is an economy that creates and exacerbates racial disparity, propels gentrification, and displaces whole communities.

While gentrification has pushed rents higher, wages and job opportunities for the working class have not kept up. A huge proportion of families in our community are unemployed, under-employed, or so poorly paid that they can barely make the rent each month. Their survival is replete with stories of bravery (waging a two-year letter-writing war with a relentless landlord), ingenuity (creating a bunk-bed out of wood scraps to fit a second child or ill parent into a studio apartment), and desperation (following an energy-drink-fueled routine of night shift on top of day shift on top of an on-call job). They are stories of struggling African American and Latino families heard at Causa Justa :: Just Cause in the Mission District.

At the other end of Mission Street, the towering financial district is home to the headquarters of multinational corporations, and not far from there are the pristine neighborhoods where the owners and managers of these corporations live. According to Forbes magazine, San Francisco has the highest number of billionaires per capita. Our state also boasts the largest number of billionaires in the country. Almost half of them are in the San Francisco Bay Area.

Higher Taxes for Rich, Not Tighter Belts for Poor
The gap between the billionaires and the people working three jobs to survive has everything to do with race. It’s a gap that has reached new proportions nationally.

Last July, the Pew Research Center reported that the median wealth of white households is 20 times that of black households and 18 times that of Latino households. From 2005 to 2009, wealth fell by 66 percent among Latino households and 53 percent among black households, compared with just 16 percent among white households. Most of the wealth was lost in the housing market as people who defaulted on predatory loans or lost their entry-level jobs ended up losing their homes. Meanwhile, the real estate speculators who caused the housing market crisis and profited from it have managed to avoid taxation and regulation.

All too often, elected officials in our city and our state echo the baseless Regan-era idea that wealth will “trickle down” and that tax breaks for the rich will benefit working class people. But come budget time, there is simply not enough money for essential services for low-income communities of color. Politicians offer patronizing advice to the poorest in our communities about “tightening our belts!” But what we really need is to tax the wealthy and change local and state laws that are getting in the way of solving the revenue problem. In California, that means taking on Proposition 13 and reshaping our tax and fiscal policy so that it benefits the people of California and not just the corporations.

Statewide Initiative for Tighter Tax Laws
California Calls is a statewide coalition with a bold strategy to take on the issue of just taxation.
“Our long term goal is to permanently close the budget gap by raising revenue and restoring California’s faith in the importance of government,” explains Esperanza Tervalon-Daumont, a member of the executive committee. “We believe a fundamental step is to address the unintended consequences of Prop 13, which has allowed big corporations to escape paying their fair share in taxes. Long term, we want to reform commercial property tax and establish a majority vote on taxes. We see 2012 as a stepping stone [in] this long term battle… through our organizing we’ll build relationships and inspire new voters and through our campaigns we’ll fight defensive battles and back revenue generating policies.”
The same may be said in regards to San Francisco. If the city does not generate revenue by taxing wealth and the wealthy, we will never have enough money to fund the crucial programs that serve our communities. “If we don’t tax the rich, we pit our communities and community-based organizations against each other in a fight for what little trickles down,” points out Myriam Zamora, longtime San Francisco resident and tenant rights counselor at Causa Justa :: Just Cause.

Why choose between meal delivery for seniors and tenant rights education? Why not think bigger and advocate for bold progressive taxation that can help us meet all of the needs in our communities? Financiers, tech developers, and green capitalists compete with each other to control land and resources in the city, knowing that San Francisco serves as their gateway to the rest of the world. Why not hold them to the progressive standards that our city is known for? Why not require them to reinvest in our communities and be responsible neighbors?
These are precisely the sort of questions being raised within the working class and low-income neighborhoods in our city and being carried all the way to city hall by a new alliance—San Francisco Rising.

Rising to the Occasion
San Francisco Rising brings together nine community-based organizations with deep roots in the Mission, Excelsior, Chinatown, Bayview/Hunter’s Point, and Visitation Valley districts. Alliance members include: Chinese Progressive Association, Coleman Advocates for Children and Youth, Filipino Community Center, Mujeres Unidas y Activas, People Organized to Win Employment Rights (POWER), People Organized to Demand Environmental and Economic Rights (PODER), South of Market Community Action Network (SOMCAN), and the SF Day Labor Program.
The alliance has been co-founded on a shared vision of building a coherent and politicized electorate that can shift the balance of power in our city as a whole. Tired of watching downtown call the shots, we have come together to make the voices of our communities heard and to step up to the challenge of helping to build a broader progressive majority in our city.

At Causa Justa :: Just Cause we witnessed the impact of this type of collaborative work in Oakland when we co-founded Oakland Rising with the East Bay Alliance for a Sustainable Economy, the Ella Baker Center for Human Rights, the Asian Pacific Environmental Network, and Mujeres Unidas y Activas.

San Francisco Rising’s Impressive First Steps
Barely a year in existence, San Francisco Rising has already had an impact. In 2010, we shared membership lists from our respective organizations and used them to knock on doors and make phone calls in Spanish, English, Tagalog, and Cantonese. As a result, we contributed to the passing of a new tax on the transfer of properties worth $5 million and above; dramatically improved voter turnout in communities of color; and built a solid foundation for more collaborative work in the future.

On an internal level, San Francisco Rising membership assemblies are known for building community among members of different organizations, linking the different neighborhoods and the campaigns that each organization is running, creating dialogue that is multilingual and multigenerational, and building a sense of power. And that is just the beginning.
We are currently building mutual support between Oakland Rising and San Francisco Rising and considering how best to contribute our collective strength towards crucial statewide fights. We are developing a platform that articulates our vision of a more just San Francisco and collaborating with larger progressive forces that also want to generate revenue by taxing wealth to build a more equitable city.
We know that the only way San Francisco will live up to its progressive image is if we come together to form the progressive majority that will make it so. And that’s exactly what we plan to do.

María Poblet is the executive director of Causa Justa :: Just Cause.