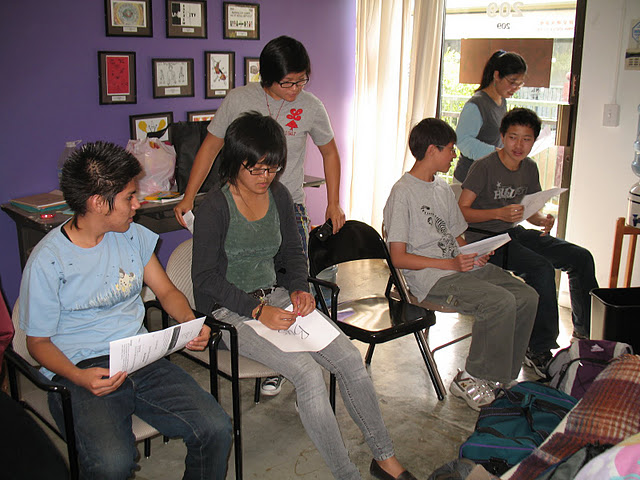 “These are the people that came to this foreign land to seek a life of hope. Armed with the will to persevere, they created wealth and laid the foundation for this city, but still live in the shadows of this society. They are continually exploited, often forgotten because they are immigrants or have difficulty with English, with their cries of frustration often falling on deaf ears, never getting media coverage.” —The Workers Committee of the Chinese Progressive Association[3]

When I started to work on this story, I went looking for an article, TV show, or radio program about the effects of the economic downturn on Asian Americans and Pacific Islanders to put into context the voices from grassroots and youth organizations I had collected. I found many resources on working families, children, low-wage workers, and great infographics on gendered and racialized differences in experiences—about African Americans and Latinos!

There was one story on NPR from 2010, which mentions that APIs are out of work the longest among U.S. minorities. It weaves in the story of an unemployed API college graduate who went on vacation and chose not to work, with a quote from Kent Wong of the UCLA Labor Research and Education Center, talking about the difficulties of the economic crisis for working-class immigrants in ethnic enclaves.[1] It is a strange juxtaposition—almost a flippant comment on the distress felt by working families—and the subtext seems to be that even unemployed Asian Americans are college-educated and can go on vacation.

Doing It Ourselves:[6] Youth and Excluded Workers Surviving the Economic Downturn
“The silence of having others name you” —Tu-Uyen Nguyen
On a recent Sunday in sunny southern California, I was at a cement warehouse building adjacent to the Los Angeles River, with about a dozen youth from the nearby neighborhoods of Lincoln Heights and Chinatown. They are members of the Southeast Asian Community Alliance (SEACA) and we are at Metabolic Studios, getting ready to take off on a CicLAvia ride on bikes lent to us by the studio.
Watching the youth take off and weave around each other playfully, you would not know that they recently won a huge public victory in getting their local City Councilmember to agree to push for affordable housing in a luxury project slated for the Cornfields Arroyo Seco Plan (CASP) area. You also would not know that many of their families make less than $1000 a month—even with two parents sometimes working 16-hour days—or that fewer than a third of the students at their schools graduate from high school. For these students, as for most of the youth in the organizations I interviewed, their small weekly or bi-weekly stipends are an important contribution to the family’s monthly income. It is one of the reasons they can continue to participate in a youth program: their families see it as a job.
In August and September 2011, I spoke with staff from six community-based organizations that work with low-income East and Southeast Asian communities, especially youth.[7] Youth organizations in particular have seen their funding drop precipitously in the last two years. 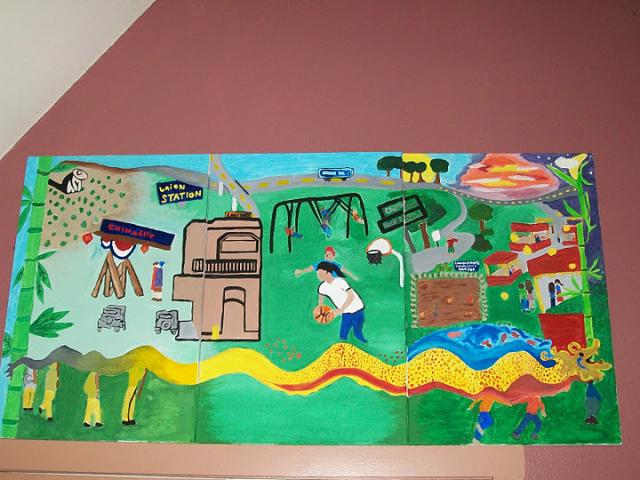 Over and over again, across the country, the people I talked to expressed the sentiment that assumptions about Asian communities have led to language-specific support being cut, on top of the massive social services cuts. For communities that were struggling long before the economic meltdown, the cuts have shredded away the systems that families had pieced together to barely make ends meet, a careful and fragile balance of resources. For some, the cuts have also meant that the hard-won ability to dream of a college education for at least one family member is now lost.
At the same time, some community organizations have been conducting participatory research of their own with the following goals in mind: (1) raise the collective consciousness of the community or at least of organizational members, (2) provide baseline information on communities that are otherwise statistically invisible to policymakers and decision-makers, and (3) generate data to use in advocating for reforms and funding. The stories elicited through these processes are deeply compelling and testify to the resilience of these communities and the organizations working within them.

No Record of Our Downward Mobility
Where is the data that reflects the downward mobility of my parents who almost made it to the middle class about a decade ago? Or about my siblings—who have a college education or advanced degree but work service sector low-wage jobs? And what about the people they have displaced? The high school students, recent immigrants, seniors on fixed incomes, and others who used to work those low-wage service sector jobs? What is their plight? What has happened to the people like my uncle and aunt who used to work in the garment industry or the fortune cookie factories of New York when they first immigrated in the late 1980s? 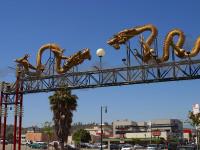 Although mainstream and progressive media are largely silent or miss the mark when it comes to Asian Americans, the academic literature presents much historical data and analysis, and makes a clear case for group-specific data collection. There are attempts to historicize and contextualize the wealth gap and examine the effects of this depression on different Asian groups. One study explains the apparent wealth gap between Asian Americans and blacks and Latinos as being a result—at least partially—of “bifurcated immigration policies that favor the entry of highly skilled economic immigrants and their families and relatively less-educated refugees and their relatives.”[4] It has created two very different populations that are clumped together within the statistically problematic census category of “Asian American.”

Since 2006, AAPI NEXUS, an academic journal published by the UCLA Asian American Studies Center, has repeatedly raised the issue of heterogeneity within the AAPI or AANHPI categories, and the importance of developing the ability to collect group-specific data.[5]

Two articles by Eric Tang on Southeast Asian communities in Social Text (2000) and American Quarterly (2010), offer theoretically and sociologically rich and nuanced cultural and historical analyses that critique the “culture of poverty” thesis and the idea within dominant culture and academic thought that Southeast Asians are exempt from this “culture of poverty.” Tang asserts that this “exemption” theory is yet another consequence of what Asian American movement activists, organizers, and scholars call the model minority myth. 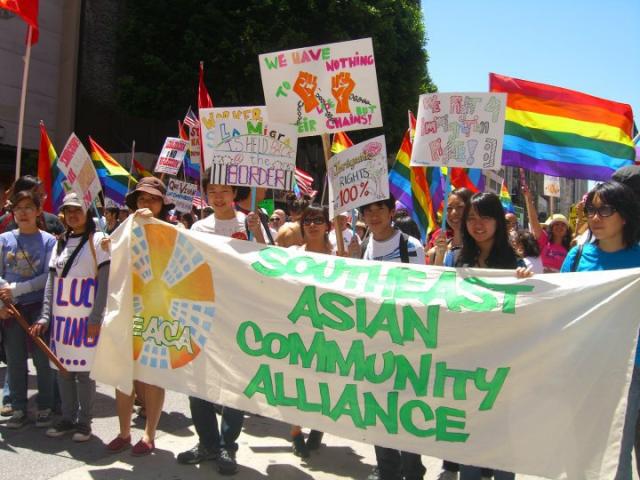 But there is little to nothing that offers information or analysis about the API communities for the last two years—in their own voices, from the point of view of community members.

Whatever the reasons for the silence in the mainstream and progressive media on the issues of Asian Americans and the economic downturn, the lack of thoughtful data and discussion makes it possible for places like Providence, RI to fire all three of their Southeast Asian language-specific social service providers while retaining 20 staff for the Spanish-speaking population. Although this has caused untold hardship for one of the largest enclaves of Khmer-speaking people in the United States, it is not uncommon for agencies to simply not provide in-language services for East and Southeast Asian communities.

On October 10, 2011, Governor Jerry Brown signed a bill (AB 1088), which requires any California state agency, board, or commission that currently collects demographic data to include an Asian American and Native Hawaiian/Pacific Islander subgroup. It also directs the Department of Industrial Relations and the Department of Fair Employment and Housing to collect data by these subgroups and post it on the web by July 1, 2012.[8] This is a major step forward in our ability to provide our sisters and brothers in the poorest communities the support they need to “flip the script” on the opportunity gap.

Los Angeles Chinatown: Gateway to Gentrification
By Sissy Trinh
Chinatown is northeast of downtown LA and like so many Chinatowns across the country, it is the immigrant gateway community for new Chinese and Southeast Asian immigrants. But in the 1950s, along with parts of the predominantly Latino Eastside area, Chinatown became a victim of highway construction—gutted and divided—not unlike African American communities in the rest of the United States.
Now, most of its inhabitants are low-income recent immigrants and refugees with limited education. They may not speak English well enough and so, are ghettoized into the restaurant and garment industries. The restaurant industry is dangerous and unscrupulous and wage theft is widespread. Garment work is seasonal—with 16-hour workdays or no work at all. Income in both industries is highly sporadic.
Many Southeast Asian immigrants have experienced severe wartime traumas but with little or no culturally appropriate social services available, most community workers are unable to gauge the depth of their traumas. In the past three years, most government and philanthropic support has gone towards banks for dealing with foreclosures but there has been no increased funding for affordable housing, which leaves out the majority of the people that make up SEACA. For these families, things have gotten much worse.
Students are under pressure to bring in money because they speak English and are expected to get “better” jobs. But with a 12 percent unemployment rate in Los Angeles, college grads are competing with high school students for “traditional” student jobs. Students who relied on summer school to supplement their education are unable to graduate in a timely manner because of budget cuts; nor are they able to get into community college because the competition is greater.
Forty years ago, Chinatown areas were the ghettos and slums. Now, they have become prime real estate as suburbanites tired of commuting try to move back into the city center. The neighborhoods are still affordable, have a great public transportation infrastructure put in place for the low-income residents, and are usually located within a 10-minute drive from downtown. Not surprisingly, the city has started rezoning and is spending money to attract new tenants and owners. It is building parks and revitalizing the river for these folks, trying to bring in high-end restaurants and shops. It paid a developer $52 million to build a parking lot!
There is now increased policing of the neighborhood and harassment of the people by private security forces hired by the Business Improvement Districts (BIDs). It used to be the chamber of commerce that harassed our youth, but the chamber is mostly made up of mom and pop shops owned by Chinese immigrants, and they are being pushed out by the BID, which is controlled by outside landowners and developers. So, now we are allies with the chamber in this redevelopment fight. Sissy Trinh is executive director of the Southeast Asian Community Alliance

Diana Pei Wu is a professor in the Liberal Studies program at Antioch University, Los Angeles, where she coordinates the undergraduate concentration in Urban Communities and Environment.