Organizing for Community Control in Madison 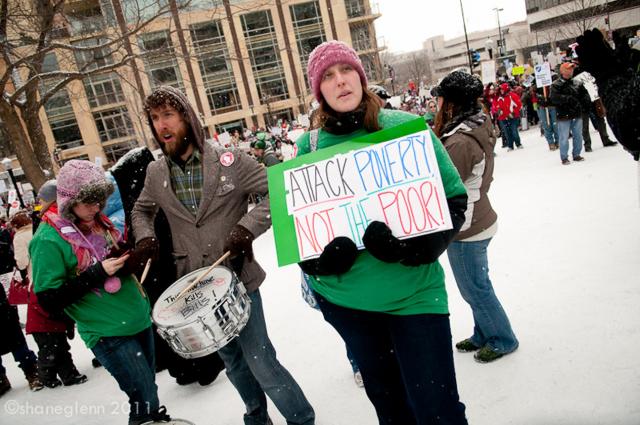 By Cynthia Lin and Sangita Nayak

In February 2011, the city of Madison captured national attention when organizers occupied the Wisconsin state capitol building for several weeks to protest Governor Scott Walker’s attacks on collective bargaining and key social services. Their rallying cry: “Whose house? Our house!” reflected back to a housing reclamation movement that had begun just a year earlier in the city.

In May 2010, a coalition of people-of-color-led groups had organized to help an African American single mother and her two young children move into a long-vacant foreclosed house. Their actions shifted the public discourse into the critical areas of property, control, and economic justice. It was part of a coordinated nationwide series of eviction defenses and housing takeovers meant to reawaken the nation to the Take Back the Land movement, which is dedicated to elevating housing to the level of a human right and securing community control over the land.  Politically, Madison may seem like an unlikely site for a radical people-of-color-led direct action and it took many national organizers by surprise. But the movement continues to grow as its actions challenge the contradiction of “houses without people and people without houses.”

As with most action campaigns, the Left would like to see a move upwards in the organizing—from immediate actions towards longer-term and larger-scale shifts in power. But we in Wisconsin assert that we need to shift the organizing downwards to focus on building grassroots literacy about the systems that exert control over people’s lives. Because it is only from these foundations of understanding that we can derive the necessary people power to build a sustainable infrastructure for democratic community control of land and economic resources.

Understand the Institutions that Manage Your Life
Among the organizations that form the infrastructure of Madison’s Take Back the Land movement is Freedom, Inc., whose work is “Helping our communities assess what they control,” says Co-Executive Director Kabzuag Vaj. “You can't take control if you don't understand what you are taking control of. By taking on issues of housing, land, and food justice that our communities are already grappling with in their day-to-day, we help people understand the institutions that manage their lives.”

Freedom, Inc. organizes youth and communities of color around the root causes of violence, drawing from the same vein of popular education work documented by Paolo Freire in Brasil and pioneered by Myles Horton in Appalachia at the Highlander Folk school.  Freire, as well as the Highlander Center, found that centering on literacy—whether it involves reading and writing or voter education through citizenship schools—creates key opportunities for engaging communities in critical questioning that leads to organizing.

Working with its partner organizations Operation Welcome Home and Take Back the Land-Madison, Freedom Inc.’s first priority is to build literacy about systems of power, starting with what communities see and experience. Engaging African American families in actions around housing gets down to the everyday concerns of people and helps to build a collective analysis of the root causes of institutionalized economic violence. Engaging Hmong elders from Madison’s low-income housing units around food access and gardening space becomes political education work that links to a radical analysis of land ownership and control. Take Back the Land-Madison understands that self-determination begins with decolonizing. If power concedes nothing without demand, then communities need to know what is within their right to control, in order to be able to assert their demands.

Creating Mechanisms for Sustainability
Take Back the Land’s efforts in Madison are grounded in literacy-building political education that is propelled by one defense, one takeover, and one action at a time. From this foundation, Take Back the Land-Madison and its partners scale up the organizing by building in local and regional mechanisms for authentic and sustained control.

For instance, Freedom, Inc. is helping youth and community members create ways to affect land use decisions made at the neighborhood scale. “Not only are we demanding that people who have decision-making control receive input from community members, but we are actually creating advisory councils in our communities to tell management what to do,” says Vaj. “Having a seat at the table builds people power. And people power counters system power.”

In addition to advisory councils, communities are also pushing for transparency and accountability at the local level. Operation Welcome Home’s ‘Housing is a Human Right’ resolution was introduced in the Madison City Council this September with a county-level resolution to follow. The city resolution, which has garnered significant support from Mayor Paul Soglin and a critical mass of city alders, institutes “comprehensive plans that call for the availability of safe, decent and sanitary and distinctive housing for all residents as well as the objectives and policies that accompany that goal.”

The resolution helps create the tools and build a platform to push for further specific policy changes towards community control of land. The ‘Housing is a Human Right’ resolution has helped Operation Welcome Home build relationships with families of color in neighborhoods beyond those it was initially working with, as well as build power by gaining the support of a local Poverty Coalition and the Wisconsin Association of Tenants Rights.

Finally, Freedom Inc., Operation Welcome Home, and Take Back the Land-Madison have been involved in developing more democratic regional structures for agenda-setting and decision-making. The Wisconsin Communities of Color Agenda (WCCA) is a collective of statewide people of color-led organizations that coalesced in response to asserting a racial justice agenda within mobilizations against Walker’s austerity measures. WCCA is a mechanism for creating a shared long-term political agenda for communities across the state.

From the Margins to the Center
Mainstream coverage of the Wisconsin Uprising mainly focused on white, middle-class Wisconsinites in heartfelt defense of collective bargaining for workers rights. The voices and the work of communities whose very survival depends on lifesaving services, such as Wisconsin’s public health care and food stamp systems, were missing. Also missing were mention of the challenges to the exclusion of people of color using Voter ID, the fight to save public schools from defunding, and the efforts to preserve in-state tuition for undocumented students. The fact is, people of color and poor white communities have been struggling against austerity and budget attacks for decades.

As Kimiyana Johnson of Operation Welcome Home pointedly notes: “We haven't had folks gathering at the capital in droves to protect these issues before because it only affected folks who were mostly invisible to dominant society. Now that Walker has been cutting folks down at the knees with all of his ‘power’ moves, many working class, middle class, and ‘once-considered-middle class’ people are being forced into dealing with real poverty issues.”

While questions about where the Wisconsin mobilizations will lead us are still up in the air, there is no doubt that the legacy of organizing for self-determination is a critical one for moving from the margins to the center. Gaining democratic control will require further action and the grounded presence and voice of the people most affected by the issues at stake, not to mention the radical imagination of visionary solutions. Or, as the sign held by a Freedom, Inc. member read: “If the middle class is hurting, the poor will die!”

Cynthia Lin is an educator and scholar focusing on community-based and participatory action research. Sangita Nayak is an experienced organizer, communicator, and public school teacher grounded in effective movement practice.