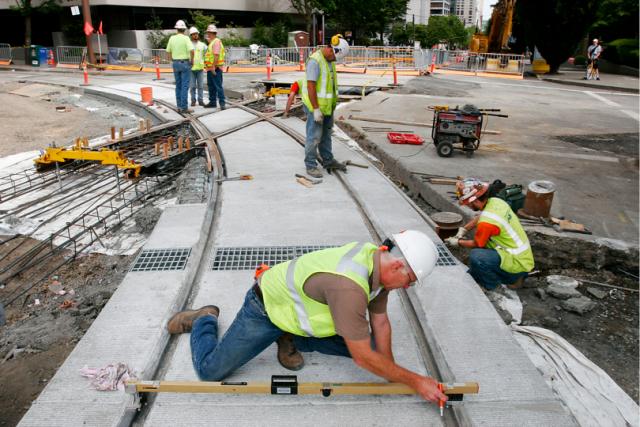 There are many reasons why public transportation and transit-oriented development should be made priorities for all metropolitan areas. For one, public transportation is the most effective way to reduce tailpipe emissions in this country. For another, the cost of owning an automobile rivals the cost of housing for low-income families. But most importantly, building transit systems creates more jobs than building roads, not to mention the fact that denser development along transit routes seems to create more jobs than the alternative, which is sprawl.

Denver Organizes for Transit Funding and Equity
In 2003, Colorado labor leaders met privately with environmentalists to seek common ground. Relations were frayed because three years before, the Building Trades unions had recruited the Colorado AFL-CIO to help defeat a ballot initiative for smart growth. Developers had claimed that smart growth was actually “no growth in sheep’s clothing,” and there was no evidence to the contrary. But Good Jobs First, which facilitated much of the 2003 private meeting, presented fresh research showing that sprawl is actually harmful to all unions and that smart growth, done right, can greatly benefit unionized employers and union members.

The following year, the groups united and won a ballot initiative to raise the sales tax to pay for FasTracks, a large new light rail system for the eight-county Denver metro area. With 122 miles of commuter and light rail and 18 miles of bus rapid transit, it is the largest new system to be built since the Metro in Washington, DC. Its construction, which is still underway, has created thousands of work-years for Building Trades members and its operation is creating hundreds of permanent jobs for Amalgamated Transit Union members.

Soon after FasTracks got underway, FRESC for Good Jobs and Strong Communities, a nonprofit group created by the Denver Area Labor Federation, launched the Campaign for Responsible Development with a coalition made up of affordable housing, low-income women’s advocacy, small business, and environmental groups. They pushed for and won a Community Benefits Agreement (CBA) for a large mixed-use redevelopment project undertaken by a division of Cherokee Investment Partners at the former Gates Rubber Factory site, a 70-acre brownfield situated at the intersection of three rail lines. The CBA keeps out big-box grocery stores, has the best affordable housing set-asides in Denver, extends prevailing construction wages to private structures, and has a targeted local hire program to give area residents a first crack at qualifying for the new jobs.

FRESC continues to work with community groups around newly built stations and routes yet to be constructed. Cost overruns and the need for additional public investment could mean a 20-year delay for one of the lines through an area with many transit-dependent families. Safety aboard transit and around the stations is also a key issue, as is access for disabled riders.

“With the possibility of a tax increase initiative of .04 percent going on the ballot in 2012, it is more important than ever to make sure that the people who need and will use transit the most are organized and working to ensure equitable outcomes around the train stops,” stresses FRESC organizer Aurita Apodaca. “Access to good paying jobs during construction as well as in and around the transit oriented development are also key.” 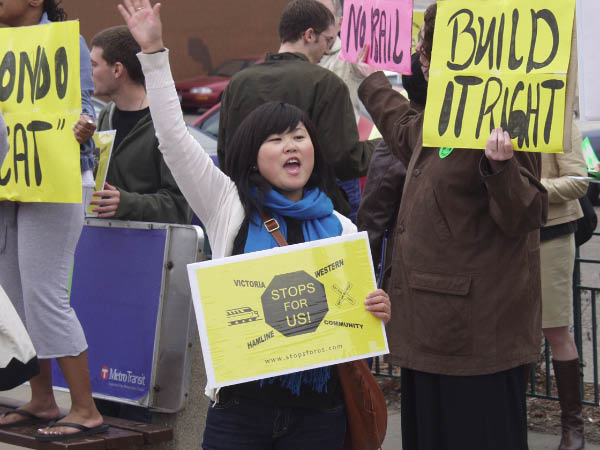 Twin Cities Win New Transit Funding, More Stations
Transit for Livable Communities (TLC) was founded in 1996 by bus riders and rail advocates in the Twin Cities, Minnesota metro area. Targeting suburban stations with the heaviest park-and-ride usage, they built a base of more than 9,000 members and became the region’s activist voice. After winning one rail line, TLC moved to broaden its base and seek dedicated funding for a larger system by forming the Transit Partners coalition, which included a large faith-based group (ISAIAH), environmental groups like the Sierra Club, seniors, policy groups, organized labor, and the Alliance for Metropolitan Stability.

In 2006, Minnesota voters dedicated motor vehicle sales tax revenue to roads and transit; the following summer, public attention was riveted on the state’s crumbling transportation infrastructure when a section of Interstate 35 over the Mississippi River collapsed, killing 13 people.
In early 2008, the Minnesota legislature enacted a $5.5 billion transportation bill (with some suburban Republicans joining Democrats to override Governor Tim Pawlenty’s veto) projected to significantly increase transit ridership. About one-fifth of the revenues dedicated to expanding the light rail, commuter rail, and bus rapid transit system will be funded by a quarter-cent metro sales tax increase. Since then, organizing has focused on making the build-out equitable.

In mid-2008, shortly after funding was approved for the long-planned Central Corridor light rail line linking downtown St. Paul and Minneapolis, the Stops for Us coalition demanded three additional stations in primarily Hmong and African-American neighborhoods. Residents there faced long walks and reduced bus service if the rail line were to operate as planned. After almost two years of organizing—and with gap construction funding from local foundations—Stops for Us won an official commitment to build three additional stations on the project begun in late 2010.

Urban Density, Public Transit Create More Good Jobs
Contrary to the claims of some developers, there is now solid evidence that urban density and public transit actually create more work for construction crafts than does sprawl.

A study by Good Jobs First—The Jobs Are Back in Town—contains several credible comparisons: single-family homes versus townhomes and condominiums; single-story versus multistory retail; new road rights-of-way versus maintenance/rehabilitation of existing roads (“fix it first”); and metros with growth management policies versus those without. By every measure, smart growth buildings and road contracts proved more labor-intensive, and metro areas with growth management showed higher job growth for construction workers.

Thanks to the 2009 American Recovery and Reinvestment Act, it also became possible to analyze job creation spurred by transit and highway spending. A pair of studies by Smart Growth America and two other groups examining jobs data at www.recovery.gov found that transit spending created 84 percent (2010) and 31 percent (2011) more jobs per billion dollars than highway projects. (Admittedly, the mix of jobs differs: transit contracts create some manufacturing jobs when they are used to purchase buses or railcars.)

Neither study could address a point that many union leaders understand intuitively: public infrastructure spending, especially for transportation, stimulates private construction, and when that happens, geography matters. If building a new Interstate interchange stimulates the construction of a Walmart and office park on a former cornfield, the construction work is most likely to be non-union. But if the money is spent on cleaning up an urban brownfield and building a mixed-use project on a transit line, chances are greater that the contractor will be union and some of the permanent jobs created will also be unionized.

Portland Benefits from Urban Density
The Portland metro area is one of America’s smart growth meccas. Ringed by a state mandated Urban Growth Boundary since the 1970s, it has the nation’s largest multicounty regional government (spanning Clackamas, Multnomah, and Washington counties), and transit, bicycle, and pedestrian commuting rates that far exceed national averages. The area also enjoys a high rate of unionization in the construction industry—creating good jobs with health care and retirement benefits—and faster long-term growth in construction jobs than the rest of the nation.

That Portland has both smart land use and strong construction unions is no coincidence, according to Bob Shiprack, recently retired president of the Oregon Building and Construction Trades Council and longtime state senator. Portland’s downtown was depressed and the trades were weak when the Urban Growth Boundary legislation was passed. Once it had survived legal challenges, the Boundary began to spur reinvestment in downtown and later in the Pearl District with its former canneries and warehouses. The Trades successfully organized most of the work, which tended to be labor-intensive because existing structures had to be demolished and replaced or gutted and rebuilt as housing or mixed-use structures. Touring Portland with Shiprack in his pickup truck is a warm experience, as he points out building after building that was built or rebuilt by union members.
As the Portland region’s leadership actively promoted density and mixed use, transit ridership grew and Portland Metro moved to augment its bus system with a downtown streetcar system. To meet the demand for streetcars, which had not been manufactured in America for several decades, Oregon Iron Works (a structural steel firm) created a new subsidiary, United Streetcar. The company’s workforce is represented by the Ironworkers and the International Brotherhood of Electrical Workers. Headed by CEO Chandra Brown, who already boasts of 90 percent domestic content and aspires for 100 percent, United Streetcar was lauded by American Rights at Work and the Apollo Alliance and was featured at the Blue-Green Alliance’s 2011 green jobs conference. United Streetcar has also won a contract in Tucson, Arizona and is bidding elsewhere as streetcar circulators make a comeback.

“We have 200,000 members in ATU. There are 15 million people who take transit,” he points out. “Guess who has more power but is least organized?”

Hanley has also created a new Field Mobilization Department and won a big change in the union’s political action fund to strongly encourage locals to build new coalitions with riders. Good Jobs First is writing a transit rider organizing manual based on best practices featured at the boot camps.
In addition to all the good jobs already created by transit construction, new job openings are expected soon in many communities as transit workers retire in droves. (Transit operators and mechanics are among the “greyest” employees in the U.S.). In anticipation, labor-management training groups, such as the Transportation Learning Center, are busy creating new hire training programs for transit agencies.

“With massive impending retirements, this green industry urgently needs interested, capable applicants, especially from the urban communities of color that depend on public transportation,” observes Center Director Brian Turner. “New national and local labor-management training partnerships are creating quality training opportunities to build the skills for thousand of new hires in the years ahead.”