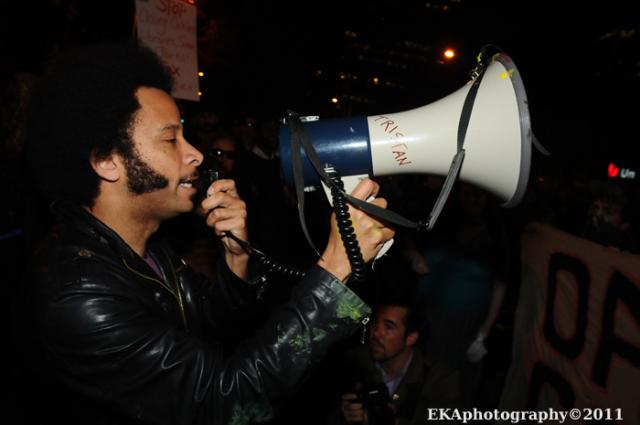 There are three things that are necessary to create a movement which causes the collapse of an authoritarian government. Poland, Yugoslavia, Egypt, and [Chile] fulfilled this. There are three forces. First force we see in such efforts is an escalation of unity of purpose. I told the Boston Occupy group last week that their audience is not capitalism or the corporations. Their audience is the people of America. We need direct civil resistance in America as never before. It must happen. If we speak to the full audience, that unity will develop.

[The] next thing is, there has to be a plan. You can’t create revolutionary change without a strategy. It has to be both short-term and long-term. Cairo had that. The solidarity movement of Poland had it. The Chilean anti-Pinochet movement had it.

The violence in our society and of our society—military violence, domestic violence, the continued lynching of people in the prison systems by the police—this system of violence is causing our society to sink into greater and greater chaos, turmoil, confusion, animosity and division.

The nonviolent discipline is necessary because you cannot beat the enemy with the enemy’s theories and practices. You cannot do it. We do not have the power to beat the CIA or the National Guard or the American Military. Therefore, the movement has to be one that will challenge that power with surprise and with our bodies. We have to find ways to create a new power, and the new power is the power of people who get engaged... In a sense that we can have a different world and a different nation and a different Los Angeles, and are willing to work on developing a plan and a strategy to make that happen.

How is it that the American people want housing, education, jobs, transportation, and better communities but we have this atrocious system that is cheating us over and over and over again and pretending that we have the best possible society?

[With] so many great movements in the United States, [why is it] that we, the American people, don’t see through this and learn that it’s going to take hard work to make the changes, and we need to be about that hard work?

Reverend James Lawson is a United Methodist pastor and civil rights leader. He played a major role in the Memphis sanitation workers’ strike of 1968 and was a founding member of the Student Nonviolent Coordinating Committee (SNCC). This article is an edited excerpt from an interview conducted by Erin Aubry Kaplan, a Los Angeles journalist, at an event sponsored by the Center for the Study of Political Graphics in Los Angeles (politicalgraphics.org).