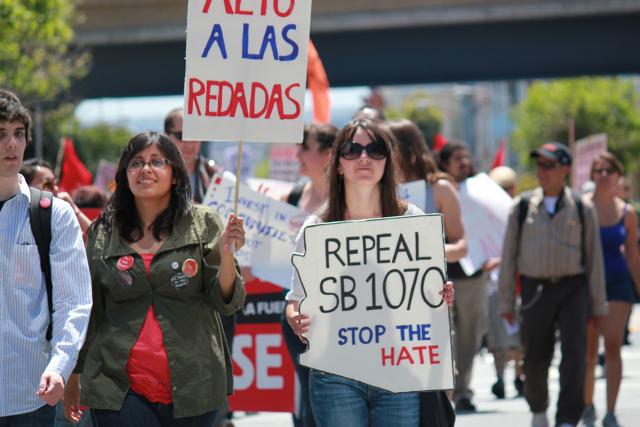 One crucial distinction is that we are in the era of mass incarceration. Many of the undocumented are being sent to prison for years before being delivered across the border. While the writings of Michelle Alexander and others have highlighted the widespread targeting of young African American males by the criminal justice system, few have noted that in the last decade the complexion of the faces behind bars has been changing. Since the turn of the century, the number of blacks in prison has declined slightly, while the number of incarcerated Latinos has increased by nearly 50 percent, crossing the 300,000 mark in 2009.

A second distinction is the rise of private prison corporations. For prison industry leaders, such as Corrections Corporation of America (CCA) and the GEO Group, immigrant detention has been their lifeblood. Just over a decade ago, their bottomlines were sagging. Newly built prisons sat with empty beds while share values plummeted. For 1999, CCA reported losses of $53.4 million and laid off 40 percent of its workforce. Then came 9/11.

Steven Logan, then CEO of Cornell Industries, a private prison company that has since merged with GEO, spelled out exactly what this meant for his sector: “I think it’s clear that with the events of September 11, there’s a heightened focus on detention, both on the borders and within the U.S. [and] more people are gonna get caught… So that’s a positive for our business. The federal business is the best business for us. It’s the most consistent business for us, and the events of September 11 are increasing that level of business.”

Logan was right. The Patriot Act and other legislation led to a new wave of immigration detentions. Aggressive round-ups supplied Latinos and other undocumented people to fill the empty private prison cells. Tougher immigration laws mandated felony convictions and prison time for cases that previously merited only deportation. Suddenly, the business of detaining immigrants was booming. PBS Commentator Maria Hinojosa went so far as to call it the new “Gold Rush” for private prisons.

The figures support Hinojosa’s assertion. While private prisons own or operate only 8 percent of general prison beds, they control 49 percent of the immigrant detention market. CCA alone operates 14 facilities providing 14,556 beds under contract with ICE and have laid the groundwork for more business with a vast lobbying and advocacy network. From 1999 to 2009, CCA spent more than $18 million on lobbying, mostly focusing on harsher sentencing, prison privatization, and immigration.

One significant result of their lobbying efforts was the passage of SB 1070 in Arizona, which nearly provides police with a license to profile Latinos for stops and searches. The roots of SB 1070 lie within the American Legislative Exchange Council (ALEC), a far right grouping that specializes in supplying template legislation to elected state officials. CCA and other private prison firms are key participants in ALEC and played a major role in the development of the template that ended up as SB 1070. 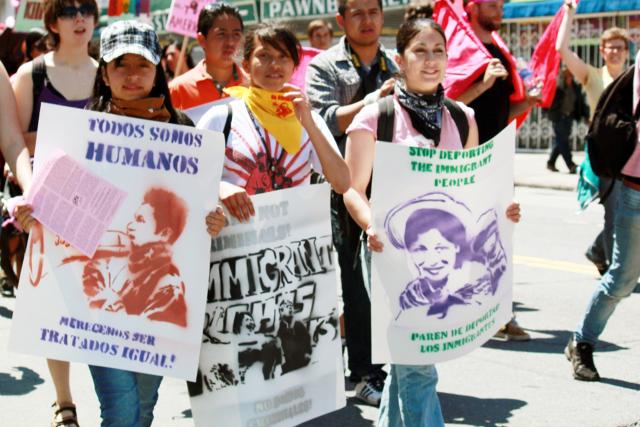 For its part, GEO Group has also been carving out its immigration market niche. Earlier this year, they broke ground on a new 600-bed detention center in Karnes County, Texas. At about the same time, the company bought a controlling interest in BI Corporation, the largest provider of electronic monitoring systems in the U.S. The primary motivation for this takeover was the five year, $372 million contract BI signed with ICE in 2009 to step up the Bush era Intense Supervision Appearance Program (ISAP 11). The Feds hired BI to provide ankle bracelets and a host of other surveillance for about 27,000 people awaiting deportation or asylum hearings.

Sadly, the Obama presidency has consistently provided encouragement for the likes of CCA and GEO to grow the market for detainees. While failing to pass immigration reform or the Dream Act, the current administration has kept the core of the previous administration’s immigration policy measures intact. These include Operation Endgame, a 2003 measure that promises to purge the nation of all “illegals” by 2012, and the more vibrant Secure Communities (S-Comm), which allows local authorities to share fingerprints of all detainees with ICE. Supposedly intended to capture only people with serious criminal backgrounds, S-Comm has led to the detention and deportation of thousands of people with no previous convictions.
At the La Raza conference, Obama tried to console the audience by saying he knows “the pain and heartbreak deportation has caused,” but his words failed to resonate. Instead, Rep. Gutierrez and others took to the streets to demonstrate that “I feel your pain” statements and appeals to the audacity of hope carry little credibility these days.

It is time for a serious change of direction on immigration issues, or pretty soon the mass incarceration of Latinos may come to be called the “New Operation Wetback.”

James Kilgore is a researcher at the Center for African Studies at the University of Illinois. He is the author of two novels, We Are All Zimbabweans Now (www.weareallzimbabweansnow.com) and Freedom Never Rests, both written during his six-and-a-half years of incarceration.