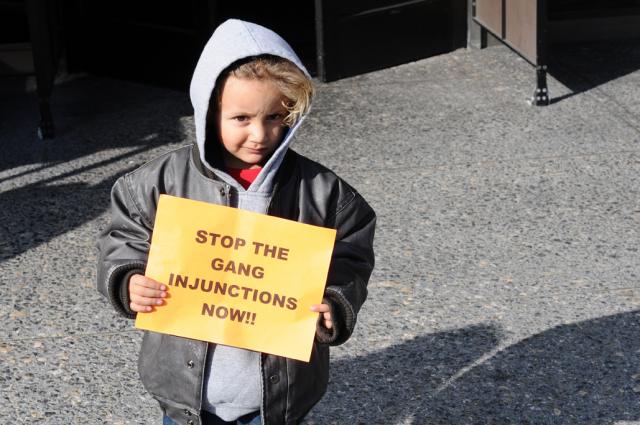 When economic interests and the criminal justice system intersect, the impacts are often detrimental to people of color. The justification for structural racism is usually couched in buzzwords like “public safety” or “tough on crime,” because the true beneficiaries of such policies are developers, politicians, and special interest groups. Gang injunctions are a perfect example.

A growing trend in law enforcement since the 1980s, these civil court proceedings circumvent the due process afforded by criminal cases, in particular, the right to an attorney and therefore, are rarely defended. Sold to the public as a quick fix for crime in urban areas, the impacts of gang injunctions extend far beyond the incarceration of a few low-level street dealers.

In Oakland, California, where 64.5 percent of the roughly 400,000 residents are non-white, efforts to enact injunctions against street gangs have been underway since the mid 1990s. Initially dismissed as unconstitutional, their legality was upheld in 1997 by the California State Supreme Court. Then in February 2009, amidst a declining economy, the Oakland Police Department (OPD) and then-City Attorney John Russo announced a joint proposal to revisit injunctions, noting that “gangs are involved in criminal activity ranging from large scale graffiti, narcotics dealing, firearm possession, intimidation, and violent crimes, such as assault, robbery, and homicide.” The initial cost estimate was approximately $400,000.

Injunctions Target Most Desired Real Estate
When Russo filed for an injunction against 19 alleged members of the “North Side Oakland” (NSO) gang in a predominantly African American area bordering Berkeley and Emeryville, he did not mention that the injunction zone was conveniently situated next to the gentrified Temescal district, called a “yupster magnet… poised to become the next Rockridge,” by the Wall Street Journal.

The NSO injunction was granted by a Superior Court judge in June 2010 over the objections of the ACLU. Four months later, the City Attorney’s office proposed a second injunction, naming 40 alleged members of the Norteños gang in a 450-block area of the traditionally Latino district of Fruitvale. What was unclear, however, was how the injunctions would further the OPD’s strategy of “hotspot enforcement,” which targets areas with the highest and most frequent occurrences of violent crime. Because OPD data shows that the city’s worst hotspots are located outside the injunction zones. In 2008, 72 percent of Oakland’s homicides occurred in West Oakland’s District 3 and East Oakland’s Districts 6 and 7—all of them outside the area covered by the two injunctions.

While the NSO injunction met with little resistance—owing to a climate of fear and historical tensions between African Americans and Oakland police, neighborhood activists say—the Fruitvale injunction was firmly opposed by a broad coalition of civil rights, labor, and social justice activists, youth groups, teachers, and police accountability advocates. The gang injunction debate became one of Oakland’s hottest issues of 2011. Initially, public support for the injunctions seemed high; tough-on-crime proponents joined with neighborhood crime prevention councils and business leaders in favor of the OPD/City Attorney stance. But as court hearings dragged on and more information emerged, opposition grew and the media narrative shifted, which in turn affected the battle for the hearts and minds of Oakland residents.

Costly Injunctions to Fuel Political Ambitions
By February 2011, the cost of pursuing the two injunctions had grown to $760,000, raising questions about effective use of city resources at a time of drastic budget cuts. More doubts were cast when a top criminologist, Dr. Barry Krisberg, told KQED’s Forum that gang injunctions “have almost no chance of reducing crime in Oakland.”

Russo’s political ambitions—he has been mentioned as a possible candidate for State Senator or Attorney General—were rumored to be the driving force behind the injunction effort undertaken without initial authorization from the City Council. Although, the injunctions did have three prominent backers on the City Council: Larry Reid, Ignacio De La Fuente, and Pat Kernighan.

“If you really want jobs, you’ve got to create a better impression,” scolded Duncan Essex, a new resident of Fruitvale, referencing Oakland’s image in the corporate world. The Oakland Chamber of Commerce’s Public Policy Director at the time, Scott Peterson, added: “Trying to keep businesses in Oakland is a major problem because of public safety.” Councilmember Kernighan linked Clorox Corporation’s decision to move 500 jobs to Pleasanton to concerns about crime in Oakland.

A Strategy Pursued Against All Odds
The businesses most closely affected by the Norteños injunction, the Fruitvale Merchants Association, refused to take sides—an indication, perhaps, that the criminal activities of street gangs were not a pressing concern. They did, however, complain about the OPD’s failure to follow-up on reports of petty theft. And the decision to set up sobriety checkpoints—which they considered a form of harassment—at a Cinco De Mayo celebration, rather than increase foot patrols, as requested by the merchants.

Harassment by the OPD was a frequently voiced concern of injunction opponents. Javier Quintero was subjected to a humiliating courtroom arrest for a technical parole violation—accepting a ride from another defendant to meet with his attorney—even though he was wearing a GPS monitor which made his whereabouts known to parole agents at all times. Michael Muscadine complained about not being able to visit his family, which lives (and has for generations) in Oakland. Critics of the injunctions say the strategy of targeting people like Muscadine and Quintero—who have juvenile records but few recent police contacts and are gainfully employed—is a smokescreen for criminalizing minority and immigrant communities at the expense of civil liberties.

As Krisberg remarked on KALW News, “Could you imagine if there was a gang injunction… in an all-white area in San Francisco or Oakland? It wouldn’t last a week. Part of it is targeting powerless people, people who don’t have resources, and that’s the only reason it has any currency, in my mind.”

Even so, in May 2011 the injunctions were authorized by the Oakland City Council and later upheld by a judge. But questions about their efficacy linger. Mayor Jean Quan told reporters that her preference would have been prevention and intervention programs. And according to the OPD’s own statistics, violent crime actually rose in the NSO area after the injunction was granted.

To Understand Injunctions, Go Behind the Veil
If the premise about gang injunctions reducing violent crime does not hold water, you have to wonder if there is another agenda at play. According to George Galvis of Communities United for Restorative Youth Justice (CURYJ), “Gang injunctions are very effective tools for areas ripe for gentrification.”

Galvis points to North Oakland’s emergence as a developing biotech corridor and the “spillover effect” of young urbanites priced out of the San Francisco housing market populating Fruitvale. Gang injunctions are “something that developers wanted” to change the demographics of those neighborhoods, he says. If so, it would not be the first such case.

In an expert declaration submitted to the Superior Court, Krisberg warns of “displacement of poor and working black and Latino families from their home communities,” and a development strategy identified as “privileged adjacency,” or “a pattern of using gang injunctions to benefit nearby affluent areas.” He refers to a study done in Oxnard, CA, but it has parallels to Oakland, where the chosen gang injunction zones are in close proximity to neighborhoods where property values are high.

According to Trulia (www.trulia.com), a residential real estate listing service, the average listing price for homes in North Oakland’s Gaskill district was $225,881 last September (compared to $483,281 in Temescal). Similarly, the flatland areas within the Fruitvale injunction zone represent some of the best real estate values in the city with median price along International Boulevard at about $162,000.

Under state law, a “nuisance” condition must be disclosed to prospective buyers. “The unassailable logic is that if buyers are told that a property is in a GI [zone], some buyers will insist on a ‘damaged’ property discount or refuse the sale,” says former Oakland City Councilmember Wilson Riles, Jr. “This will lower the value of those properties in the GI area.”

Property values in the Bushrod neighborhood have already fallen 12 percent since the injunction was enacted, according to Zillow.com. A new study by RealtyTrac.com projects a $12.2 billion loss in Oakland home values by 2012 because of foreclosures; Fruitvale being among the neighborhoods most affected. Any further drop in property values resulting from gang injunctions could accelerate the major shift in population demographics Oakland is currently undergoing. 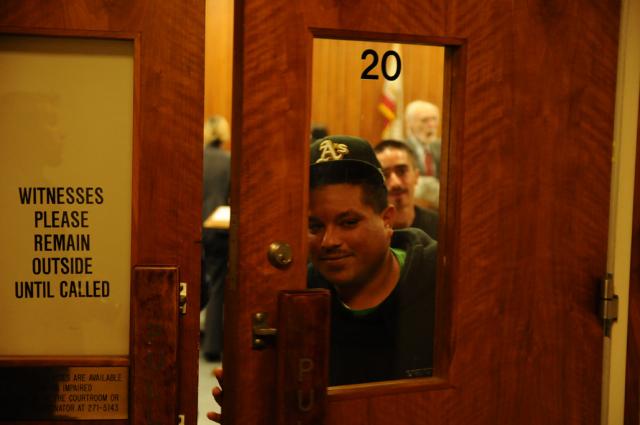 Blacks Being Pushed Out of Desirable Neighborhoods
Census data shows that in the last decade, Oakland’s black population has declined by 25 percent. A 2010 study by Urban Strategies identified North Oakland as an area that lost the most African Americans.

Even before gang injunctions and the foreclosure crisis, gentrification was already underway in Fruitvale. A recent East Bay Express article (“Fruitvale New Hangout for Hipsters?”) mentions its growing popularity as a day-trip destination for UC Berkeley students in search of cheap eats at the numerous taco trucks that cater to immigrant laborers. Longtime residents fear that the region will turn into an East Bay version of San Francisco’s hipsterish Mission district—which, incidentally, experiences frequent gang violence despite existing injunctions.

Still, Fruitvale’s transformation has not been entirely smooth. In 2006, the Express reported that Fruitvale Station, a proposed model for a mixed-use transit village (and a pet project of City Councilmember De La Fuente), was an epic failure. Development cost a whopping $100 million but poor planning resulted in a retail center that did not bring in the promised hoards of post-commute shoppers, did not provide enough affordable housing, and for the most part, duplicated existing stores that hawked the same goods for lower prices in the neighborhoods. “We were promised an affluent, upscale customer base. Instead, we have immigrants who are looking for bargains,” one business owner was quoted as saying.

Joe Haraburda, president of the Oakland Chamber of Commerce, says he supports “the concept” of injunctions, calling them “a reasonable approach to protecting the citizens of Oakland.” When informed that violent crime rates in North Oakland had risen since the injunction, he called it “an interesting situation” and added, “we really need to give it time to work.”

Interestingly, Haraburda contradicts both Councilwoman Kernighan and his own former staffer Peterson in stating that perception of crime in Oakland is not a major factor for businesses looking to locate or relocate. “I don’t think you can tie Clorox’s relocation… entirely to a crime situation,” he says, and adds, “I’ve never heard anyone say directly, ‘I’m not coming to Oakland because of crime.’” According to attorney Mike Siegel, however, a big Atlanta-based corporation recently decided not to open an Oakland office, allegedly because of the city’s liberal “hug-a-thug” policies.
For CURYJ members, it all comes down to prioritizing community development over corporate development. “Tough-on-crime saber-rattling reinforces structural racism,” says Critical Resistance’s Isaac Ontiveros.

On the other hand, “When you create viable employment and education opportunities, you see a drop in crime,” says Galvis and adds that several effective youth programs, including Youth Together, Leadership Excellence, and the East Side Cultural Center, all suffered cuts in funding, even as the amount spent on injunctions ballooned to an estimated 1 million dollars (as of May 2011). Instead of a “top-down” approach, which reinforces the popular perception of crime in Oakland but fails to address its root causes, let’s invest in our communities, says Siegel.