As the snow piles up around Lake Tahoe and tourists flock to the resorts, it makes for happy hotel and restaurant managers, casino and shop owners, but rising snow levels also means higher heating bills, more traffic, and a greater cost of living. For a tourist, the higher prices and traffic congestion are a temporary inconvenience—the price of visiting one of the most beautiful places in the world. For the low-income local community, the consequences are far more serious as the increase in wealth around the Tahoe basin has led to a flurry of developments and redevelopments, each pricier than the other.

Vail Resorts, owners of Heavenly Mountain Ski Resort in South Lake Tahoe and Vail Ski Resort in Eagle County, Colorado, see the development of ski villages as a means to increase business from skiers and snowboarders. The ski villages—patterned after old European resorts—try to recreate a certain alien mountain culture where visitors can stay, eat, play, and spend their money. More than a mere tourist trap, a ski village like Heavenly Mountain Village is fitted for an affluent tourist with its art galleries, chic coffee shop chains, brand-name ski stores, realty offices, and the occasional local high-end boutique or restaurant.

While the ski villages may have destroyed local Tahoe culture, they offer an opportunity to correct some of the mistakes made by earlier development. Heavenly Village, for example, has better water management, more energy efficient buildings, a more centralized location for tourism, and offers an opportunity for transit oriented development (TOD). 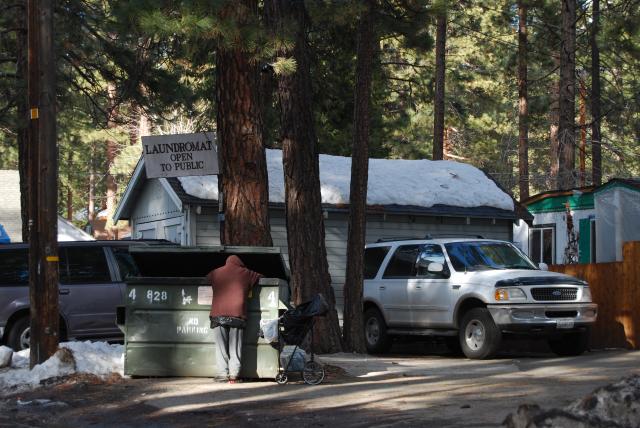 “Heavenly”South Lake Tahoe
The South Tahoe Redevelopment Agency (STRA) was created in 1988 by the City of South Lake Tahoe to give the dying Stateline area a boost, and the area’s first TOD was enacted in June of the same year. The purpose of the agency was to enhance the natural beauty of South Lake Tahoe while centering development on an improved transportation network. The development was organized for mixed use and TOD, and the STRA claimed that their plan was informed by discussions with local community members and community workshops.

The City of South Lake Tahoe and the Tahoe Regional Planning Agency claim that since the completion of Heavenly Village in 2001, the Stateline area has seen a “20 percent reduction in vehicle traffic at the Park Avenue and U.S. Highway 50 intersection...” (Restoration in Progress: Environmental Improvement Program Progress Report. Tahoe Regional Planning Agency, 2007). This means that there is less sediment runoff into the lake and fewer CO2 emissions. As far as the STRA was concerned, they had accomplished their goal of creating a more walkable environment around the Heavenly Ski Resort where visitors could spend their money shopping and dining. Regardless, the city’s romantic view of sustainable development neglected to address social equity.

With increased wealth, often comes increased poverty. As Heavenly Village gained notoriety as a four-season resort, low-income residents were forced to compete with Bay Area wealth. Their economic vulnerability marginalized them and forced them  out to the back roads of South Lake Tahoe. In attempting to create a ‘high end’ playground for the elite, the once renowned local ‘mountaintown’ characteristics were lost and the decaying infrastructure  of the local low-income community hidden behind the second homes of the wealthy. Or as Delicia, a South Shore resident commented sardonically: “This is poverty with a view.”

Being a Have-Not in a World Made for Haves
The Heavenly Mountain Shuttle bus offers free rides to anywhere on the South Shore—anywhere that is, tourists or skiers or weekenders might want to go. Residents have to take the local BlueGO bus—as infrequent as it is—to get to the free shuttle to the ski resort. What’s more, increased ridership on the free Heavenly Mountain Shuttle has caused the fares on the local BlueGo to go up to three dollars one way.

“As with all aspects of the city, transportation decisions must be made on informed citizenry,” said Joan Roelofs in her book, Greening Cities: Building Just and Sustainable Communities (Bootstrap Press, 1996). “Public participation should include those who are affected by transportation systems, including the elderly, disabled, poor, and children. Too often, it is the commercial sector and those promoting ‘economic growth’ that dominate in this area.” This is exactly what many South Shore locals fear has happened.

In the nearby community of Bijou, where the majority of South Shore’s low-income Latinos live, the rental properties are primarily converted old hotels left over from the 1960s Winter Olympics building boom. Now the spike in land prices caused by the creation of Heavenly Village has essentially assured low-income residents that they will continue to live in run-down and dilapidated apartments. As Hal Clifford, author of Downhill Slide: Why the Corporate Ski Industry is Bad for Skiing, Ski Towns, and the Environment (Sierra Club, 2003), points out in his book: “A ski town worker’s life increasingly is a commuter’s life, defined by the constant struggle to get by in a world of below average pay and above average costs... The haves-versus-the-have-nots reality has bitterly split ski towns and... deeply faulted the socioeconomic and political landscape in many mountain communities.”

Finding a Voice for the Disenfranchised
Clifford also pointed out that as long as the people who live in small mountain towns do not control the levers of power, the towns will end up being what they don’t want to be. Now it appears that there is an attempt being made by the Latino communities around the lake to create their own political power and in this, they are being helped by the Family Resource Center in the nearby town of Truckee.

“We are improving people’s health and creating community leaders who will become stakeholders and gatekeepers in changing the system,” explained Executive Director Adela Gonzalez del Valle. “[We are] working with Latino community members to help [them] find a voice... to challeng[e] the existing system in the town.”

And not a moment too soon as the TRPA is now eyeing Kings Beach, Lake Tahoe’s poorest area with the largest Latino community, for its next transit oriented redevelopment.

Gabriel Valle is a graduate of San Jose State University where he wrote his Masters thesis on “Sustainable Tahoe: Bridging the Economic Gap” in 2009.  He will join the Sociocultural Anthropology doctorate program at the University of Washington Fall 2011.