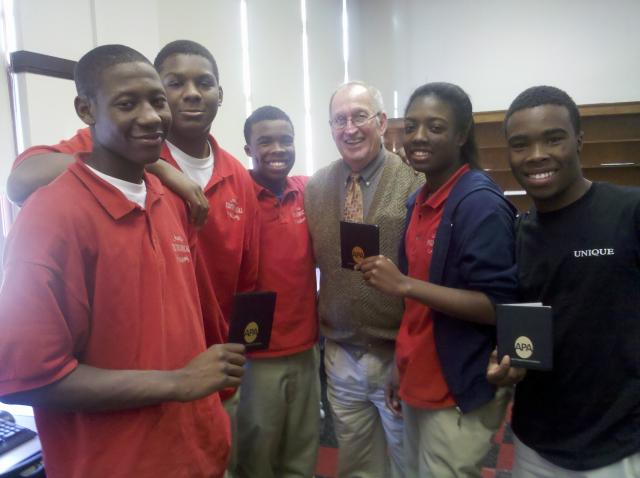 The 2007 founding of the Austin Polytechnical Academy, a public high school on Chicago’s Westside with a focus on college preparation and careers in engineering and manufacturing, began with the closing of a candy factory. Brach’s—the largest candy manufacturer in the world at that time—was threatening to move production to Mexico and eliminate more than 2,100 jobs following a series of misjudgements by the company’s new owners.[1] In other words, the company’s desire for short-term profit was going to create long-term job and income losses for the workers and their community—a common enough scenario all over Chicago and the rest of the United States.

In 1990, the International Brotherhood of Teamsters (IBT) Local 738 and the Garfield/Austin Interfaith Action Network (GAIN), approached the Center for Labor and Community Research (CLCR) for help with research and strategy to tackle a problem in their community. Assured by the knowledge that Brach’s was still a viable company despite recent crises, CLCR, IBT, and GAIN spearheaded the Save Brach’s Coalition, which organized about 100 Chicago and Westside community, civic, and religious organizations.[2] Although their efforts did not prevent Brach’s from closing its Chicago plant in 1996, it placed a magnifying lens over the critical role of manufacturing in local economic development and quality of life. Unlike any other sector, manufacturing generates middle-class incomes, creates five new jobs in related sectors for every manufacturing job created, and increases the local tax base because most manufacturing companies are domestically owned, privately-held, small businesses.[3]

In 2001, CLCR and the Chicago Federation of Labor (CFL) published a report—“Creating a Manufacturing Career Path System in Cook County”—detailing the gaps in the workforce development and training system as it related to the manufacturing industry. It shows: (1) the lack of standards to define and measure quality training; (2) the paucity of required skills training within the public school system and community colleges; and (3) the absence of identifiable recruitment mechanisms to attract young people into the field.[4] The report also outlined ways to address these issues, which led to the creation of the Chicago Manufacturing Renaissance Council in 2005, a multisector coalition of government, labor, business, and community leaders seeking to make Chicago the global leader in advanced manufacturing. The Renaissance Council’s first major project was the development and design of the Austin Polytechnical Academy.

A School After Arizmendiarrieta’s Heart
Austin Polytech is not just another vocational school trying to plug Kid A into Job B. Inspired by international best practices in community and economic development, it serves to catalyze community development instead of simply being a portal for the best and brightest to leave the community.

In 1943, a catholic priest named Don Jose Maria Arizmendiarrieta founded an engineering high school in the small industrial town of Mondragon in the Basque region of Spain after it was devastated by the Civil War and economic depression. Arizmendiarrieta believed that if the youth learned skills in engineering and manufacturing based on Catholic social values they would start businesses that could help improve the community by providing gainful employment, which would generate the wealth needed for rebuilding the community infrastructure. Five of the first batch of graduates did start their own manufacturing company in 1956 making small stoves that sold successfully all over Spain. More importantly though, the company was created as a worker cooperative grounded in community-building values, which ensured that profits were reinvested in the business to provide more jobs, foster new businesses, and thus help the broader community. Today, the Mondragon Cooperative Corporation is a network of 100 cooperative businesses employing over 85,000 people in Spain and around the world. It still espouses the same values of community-driven economic development.[5]

In 2009, when CLCR sponsored nine Austin Polytech students on a trip to Mondragon, they were impressed by the lack of visible poverty—the clean streets and quiet neighborhoods—and surprised to learn that almost everybody who wanted a job had one. While Austin Polytech is still in its formative stages, the school’s mission of educating the next generation of leaders in advanced manufacturing holds a strong promise for community-driven development and revitalization.

Good Overcomes Ugly Side of Manufacturing
Manufacturing has a mixed legacy in the United States. Although always credited with creating a middle class, manufacturing also has an ugly history of pervasive racism in its assignment of the most dangerous and dirty work to people of color. Following the wave of plant closings in the 1970s and ‘80s, all the positive effects of manufacturing—hundreds of thousands of jobs and living wages—evaporated, leaving behind the empty shells of factories, toxic contamination, and massive urban blight. So, when the Renaissance Council and CLCR approached the Austin community with a proposal for a public school dedicated to preparing youth for careers in manufacturing, the community feedback was ambiguous.

Critics in the community accused the proposal of trying to repeat the racist patterns of manufacturing from the past and targeting African American youth to serve as grist for the mills of industry. Critics in the business sector expressed deep concern and cynicism over the ability of public education—especially inner-city public education—to meet the needs of today’s high-tech manufacturing industry. And critics in the educator community, including several closely associated with the school, were hostile to the notion of linking education to manufacturing, which they believed only led to dead-end jobs.

It took persistent and meticulous engagement with stakeholders before many of the critics and skeptics were won over. CLCR repeatedly stressed the importance of integrating college and career education—the benefit of rigorous college preparatory academics for students of all abilities and the value of contextual learning through hands-on career preparation experiences.[6] We also emphasized the nationally-recognized industry credentials students could earn while in high school. For example, individuals who earn National Institute for Metalworking Skills (NIMS) credentials are typically preferentially hired[7] and could start entry-level, career-track positions earning an average of $16/hour.8 Moreover, the average compensation (wages and benefits) in the manufacturing industry is about $69,217 per year, compared to $46,789 per year in the medical industry, and a paltry $27,411 per year in the retail industry.[9]

CLCR also pointed out that manufacturing is no longer simple assemblyline work but often involves designing and producing increasingly sophisticated and precise components for the most advanced technologies—from MRI machines to wind turbines.[10] Enhanced opportunities for business ownership was another selling point. A CLCR study of 800 manufacturing companies in Chicago revealed that 40 percent of companies with an owner aged 55 or older were at risk of closing solely because there was no successor.[11] Finally, CLCR also shared its vision for an innovation center to facilitate research and development for the wind turbine industry and its belief that Austin could one day be a global leader in the development of technologies and components for the renewable energy industries. Austin Polytech could be an integral part of cultivating the next generation of talent that develops the technologies and starts the businesses to manufacture them. It could be a springboard for the redevelopment of the entire community—in economically, socially, and environmentally sustainable ways—guided by the skills and values of its students.

Perhaps the most persuasive argument in the end was the ongoing development of a dynamic program to directly engage Austin Polytech students, most of whom were ignorant of what a career in manufacturing and engineering entailed, prior to enrolling in the school. Every one of the school’s 380 students is required to take three to four years of pre-engineering courses and a NIMS machining course. To date, 86 have earned a NIMS credential.

Career Exposure Key Part of Curriculum
CLCR staff works closely with Polytech teachers and administrators to coordinate a variety of career exposure activities for the students. Since each of the stakeholders—students, teachers, administrators, and manufacturers—has different expectations, needs, and interests, there is a steep learning curve for all involved and adjustments required all around. In addition, CLCR facilitates extracurricular leadership development programs, such as SkillsUSA.

Most freshmen and sophomores go on at least one manufacturing facility or trade show fieldtrip per year. The experience usually is an eye-opener for the students who may have certain preconceptions about manufacturing facilities. A freshman trip to Winzeler Gear last summer revealed a factory facility full of sunlight and art on the walls and engaged employees working with highly sophisticated machinery. The students learned that the employer had paid for several of the staff engineers to earn their Masters degrees. And that the factory, like most of today’s manufacturers, relied on innovation rather than on manual labor to remain competitive and profitable in a globalized economy.[12]

With juniors and seniors, the school focuses on job shadowing, summer jobs, and internships. Last summer, 30 students found employment in the manufacturing sector. A great deal of preparation and evaluation goes into ensuring that these are high-quality experiences for the students and the manufacturing companies.

CLCR also looks for opportunities to bring manufacturers and employers into the classroom to work with teachers on finding intersections between lesson plans and real-world applications. Through a unique partnership with the John Marshall Law School—known for its intellectual property law program—Austin Polytech was able to offer a patent law workshop over two semesters, which resulted in 11 students collectively earning $108,000 in scholarships to John Marshall. Recently, the school started a new leadership in sustainability initiative in which 10 freshmen are learning about environmental sustainability in their community and careers in the green economy.

The ultimate goal is to have students experience the full breadth of manufacturing career possibilities—from machinist to engineer, from business owner to patent lawyer, from environmental sustainability expert to nanotechnology scientist.

A School of Dreams and Possibilities
Operating within a disenfranchised community with one of the highest rates of violent crime[13] in Chicago and an unemployment rate of over 20 percent,[14] and where the average incoming 9th grader reads at the 4th grade level,[15] Austin Polytech seeks to create a nexus between its students and local small manufacturers who are facing a significant shortage of skilled employees,[16] despite increased automation and the recession. In the short term, the school hopes to provide students with access to skilled, living-wage career paths and in the long term, cultivate a fertile landscape for leadership development and empowerment, business ownership and entrepreneurship that can fuel community revitalization.

CLCR is currently working with leaders in the San Francisco Bay Area Manufacturing Renaissance Council to explore the possibility of replicating the Austin Polytech approach in West Oakland. The idea is to help guide others through the opportunities and challenges inherent in this model—not only to create clear pathways out of poverty for low-income people of color, but also to effectively use economic development as a tool for long-term community revitalization driven by community values.