Filipina Domestic Workers on the Move 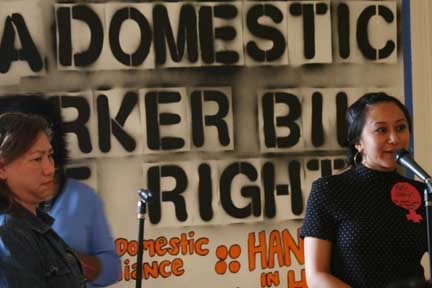 The fight for the rights of domestic workers is often a struggle for basic respect and human dignity. Katie Joaquin, lead organizer at Filipino Advocates for Justice (FAJ), helps to spearhead the campaign with a special focus on worker support and organizing. For about four years, Joaquin has been organizing Filipino domestic and airport workers and caregivers, to demand improvements in their working conditions and to help them organize their coworkers. In the following interview, Joaquin discusses the Filipino domestic worker perspective and why the rights they demand are significant in instilling solidarity within the community. 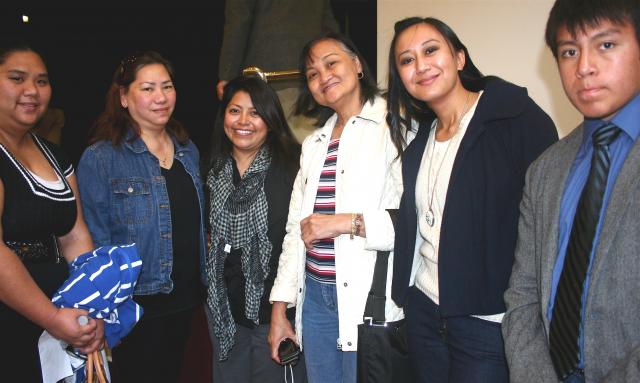 Christine Joy Ferrer: Why is organizing for the rights of domestic workers important to you personally as a Filipino American, and what is it about the struggle that really connects you to the reason why these rights are so vital?
Katie Joaquin: First, we have to understand why there are so many Filipino domestic workers to begin with. In the Philippines, there’s an abnormal amount of people that are leaving the country every single day. Imagine how many people were in your high school—I’m guessing probably around 4,000—[and] 3,800 suddenly disappeared. And this happened to high schools across the country every single day! There are 3,800 people leaving the Philippines every day in search of work. In the U.S., we have an unemployment office that helps us find work in our communities. In the Philippines, people find work through the Philippine Overseas Employment Agency that ships people overseas. So, the situation is that people are being trained to fill jobs in other countries.

In the U.S., there’s a growing need for healthcare workers because we had the Baby [Boom] and now there [are] many elderly needing care. [We] need affordable, low-paid labor, so the Philippines is training people as nurses, or as health workers. They have the skills, training, and credentials to be a nurse, or a doctor, but instead, they become a caregiver or a domestic worker. And the work is very difficult. When you think about the domestic workers, we’re talking about our mothers, our lolas (grandmothers). Over 50 percent of them are primary income earners. They are the ones their families rely on for money and support, and some are making as little as $50 per a day, working 24 hours. It requires round the clock focus. It can be very strenuous, when you’re cleaning, lifting, cooking, etc. and it’s someone’s life that rests in your hands. Yet, you’re not able to make enough money to support your needs here, as well as the needs of your family back home. The industry is rife with abuse because the workers are working in isolation, because there are no protections, and because for many of them, this is one of the first jobs they’ve encountered.

In the Filipino culture, we have this Bahala na, Utang na loob feeling. One believes, “This is just how it is.” Or “We had no work in the Philippines. We’re thankful for work, even if it’s bad or underpaid.” My lola, my aunties, they all started their lives in America doing domestic work on the east coast—care-giving, as well as cleaning houses, cleaning mansions. I’m working for an issue that I feel really deeply about. And I am honored to be able to organize for the cause. 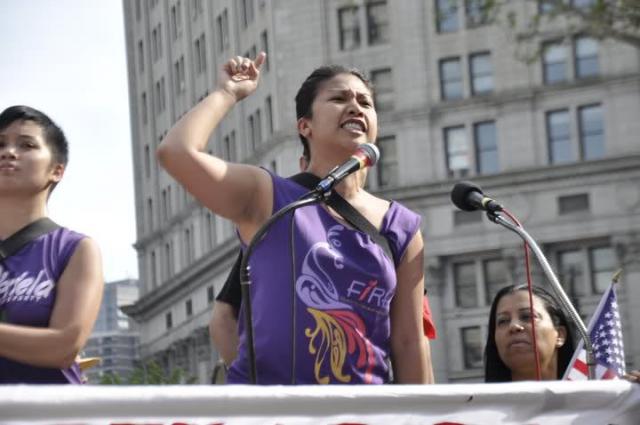 Ferrer: How has Filipino Advocates for Justice been organizing for the domestic worker rights campaign and what are the chances of the legislation passing?
Joaquin: We are developing the leadership of workers, immigrants, and young people to not just be able to advocate for their rights and change their conditions, but to also engage other workers to embody these same attributes. We want to form organizations that will continue to fight for worker rights after the organizer leaves, and long after the institution is gone.

Workers are sharing their testimonies at community events, with elected officials, with other domestic workers, and their employers. Employers are in turn sharing these stories with the media. It’s essential to understand, “What are the real conditions in private homes, in the streets and neighborhoods, in the journey from our home countries to here?”

They deserve protections, as any other worker. Granting these protections will also help shift this perception that domestic work isn’t work. We’re demanding time to sleep, breaks, [and] health care if they injure themselves. [We’re demanding recognition] that these are workers [and] human beings.
New York just passed their domestic workers’ bill of rights last year. Apart from the budget and financial situation of California, we feel that this bill has a great chance of passing because this movement is growing. 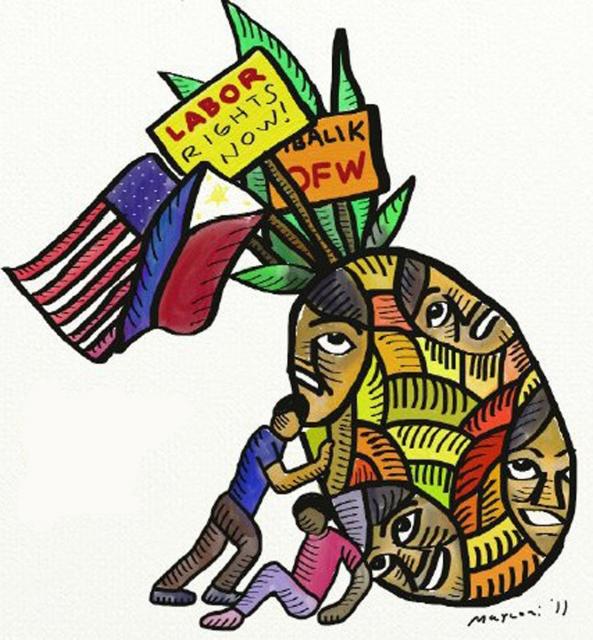 Ferrer: How will the legal protections strengthen worker solidarity and the future capacity of domestic workers for collective action?
Joaquin: The process of fighting for these protections is really deepening the worker solidarity and connection between Filipinos, Mexicans, Guatemalans, Salvadorians, and other Latino workers here... as well as Black workers, employers, people with disabilities, seniors. All of these different people who’ve taken part in this campaign have served to strengthen solidarity. We’re all working together for worker rights and protections. We’re sharing about the conditions at work and why we even have to take this work. That’s where the solidarity happens, because we see our stories reflected in each other’s faces and each other’s histories. Those are the ties that bind and allow people to engage in a deep, beautiful, and difficult struggle that becomes the driving force for a campaign like this bill of rights.

We know that changing the law doesn’t [automatically] change conditions. People are entitled to minimum wage, but not everyone receives it. Collective action changes conditions. And the workers, by being involved in this campaign, are able to practice and realize their leadership and become fighters. They are able to win protections that become the tool that motivates workers to organize and enforce their rights. So, first they are demanding rights. Once they have those rights, the fight is about actually getting those rights. This is how we’re able to reach out and support the caregivers, and really cultivate that fighting spirit that we see every single day in this campaign. Ultimately, at the heart of it, is a deep understanding of what needs to change and taking action to improve our situation.

About Domestic Workers
Domestic workers are among the most isolated and vulnerable to abuse and mistreatment behind closed doors. Yet, historically they have been exempted from laws governing other workers, such as decent wages, a safe and healthy workplace, and worker’s compensation.
AB889, the Domestic Worker Bill of Rights, gives domestic workers industry-specific protections and the right to use kitchen facilities and cook their own food. It sets standards for sleep, sick days, living wage increases, and paid vacations.
There are 195,841 domestic workers in California; 97.8 percent are immigrants, 7.4 percent are Asian (5,691 from the Philippines and 3,587 from China).
It is safe to assume that these figures may be grossly underestimated as the workers in this industry are considered “hard to reach” populations by the U.S. Census and are historically undercounted.
In his recently published book, Ating Kalagayan: The Social and Economic Profile of U.S. Filipinos, Professor Peter Chua calculates there are 114,000 Filipino domestic workers in the U.S., based on U.S. Census data and the 2008 American Community Survey.
*DataCenter, Oakland, CA, 2008.

Christine Joy Ferrer is the web and publishing assistant at Urban Habitat and the editor and founder of Eyes Opened (www.eyesopenedblog.com), a blog dedicated to all artists of color committed to social justice.