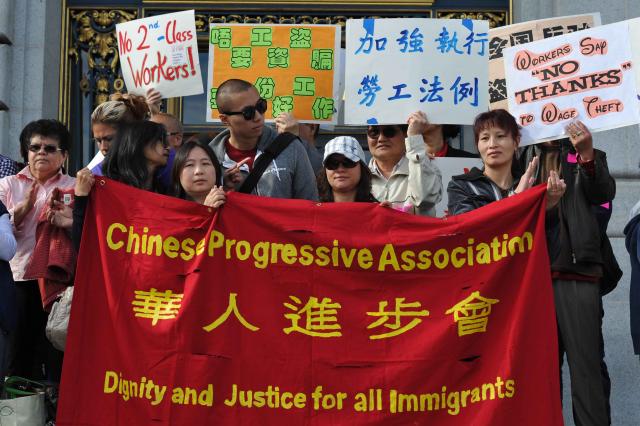 Li Shuang Li, 42, had worked at a restaurant in San Francisco’s Chinatown for seven years before she discovered that her boss was stealing her tips. At the time, Li was barely making $900 a month to support her 13- and 11-year-old children and was afraid of confronting her boss for fear of losing her job.

So, Li allied with her colleagues and they collectively raised the issue with their employer, whose ill-tempered response was: “If you want to complain, I’ll just fire you!” But the employees threatened to quit en masse if he did not pay them back the tips he owed and he eventually came to a verbal agreement.

Li says she was fortunate to receive her back pay relatively quickly, unlike some other waitresses who were given the run around by the boss until some brought their relatives in to coerce him. Rather than continue working for that employer, Li decided to quit and has been unemployed for three years now.

Tip Stealing—Common Practice in Chinatown
Situations like the one faced by Li, unfortunately, are very common in Chinatown’s restaurant industry, which employs over 14,000 Chinese immigrant workers unfamiliar with U.S. labor laws and minimum wage mandates. When the Chinese Progressive Association (CPA) was started in 1972, it was with a view to help empower—through education and organization—the low-income and immigrant Chinese community that is most susceptible to exploitation.

Li says she is fortunate to be part of an organized workers committee, referring to the CPA, which “at a grassroots level, encourages workers to come forward if they are being taken advantage of in the workplace,” according to Shaw San Liu, lead organizer of CPA’s Worker Organizing Center. But in reality, many are afraid to come forward because they don’t want to lose their jobs, she admits.

In September 2010, the CPA released a study—Check, Please!—based on a survey of 400 San Francisco Chinatown restaurant workers. One of its key findings was that 95 percent of respondents did not earn a living wage and 50 percent made less than the minimum wage. Additionally, 20 percent of those surveyed worked over 60 hours per week and 48 percent had experienced burn injuries at work.*

Since 2004, the CPA has gained some momentum in its campaign for worker rights and successfully retrieved over $700,000 in back wages for its members. On occasion, the CPA has also enlisted the help of the Office of Labor Standards Enforcement. Wage theft is not an isolated event. Coalitions are being formed all over the country to win employment rights not only for restaurant workers but also taxi drivers, garment workers, and grocery store workers.

What the Chinatown Tour Doesn’t Reveal
San Francisco’s Chinatown is the oldest in North America and holds the largest Chinese community outside of Asia. It is also the strongest symbol of a historic apartheid policy. But the average tourist visiting for a taste of Dim Sum or to buy a jade trinket would never know of the adversities faced by the workers daily.

“Because a lot of Chinatown residents are monolingual, they are subject to low-wage jobs and vulnerable to [being] taken advantage of,” says Dr. Ling-Chi Wang, professor emeritus at UC Berkeley and founder of Chinese for Affirmative Action, a civil rights group. “The employers are also vulnerable because competition is stiff, and they try to undercut each other just to survive. There are not many places in the city where you can get a meal for $4.00—that’s just unheard of! So, instead of the consumer paying for it, the worker ends up getting shortchanged.”
“Most of the residents are not in Chinatown by choice but [out of] necessity,” adds Wang. “It’s a transition from China. They come to work, eventually save money and move, or so they hope.”

Wang believes that the Immigration Reform and Control Act of 1986 has “intensified the misery of Chinese workers and has achieved the opposite effect.” Especially in a recession, employers prefer undocumented workers because they are willing to accept less pay, which opens them up to more exploitation.

Restaurant Opportunities Center (ROC) United is now located in eight cities, including Washington D.C., Miami, and Michigan and has helped workers receive paid sick days while providing free industry training classes, help with job placement, and training in know-your-rights workshops.
They released a report—Serving While Sick—around the same time as the CPA reports, which was the largest study ever of the health conditions of restaurant workers with over 4,300 surveyed. They reported that 90 percent of workers did not receive sick days and were not insured by their employer.  Two-thirds of the workers reported working while they were sick, which causes great concern for consumers.

The Story of Li Nong Hu
Li Nong Hu, 43, is a waitress who has worked at the same restaurant for 16 years. Lately, she has had to cut her hours because of severe pain in her left leg brought on by standing for up to 10 hours on the job. She has no health insurance, so she self medicates. “I’m afraid to go to the hospital because healthcare is so expensive here,” she concedes.

Hu, who has lived in the U.S. since 1994, thinks that their living conditions are much worse here than in China. At present, she lives with her husband and two children in one of Chinatown’s (famously unsanitary) single room occupancy (SRO) units, where their studio shares a kitchen and one bathroom with the rest of the floor’s residents.

Hu, however, believes that her children are getting a better education in the U.S. “My children understand that we have worked very hard for them,” she says.

CPA Report’s Other Revelations
Another interesting fact gleaned from the CPA report points out that workers in Chinatown’s $70.8 million (estimated taxable sales) restaurant industry stand to lose over $8 million annually because of labor law violations. Workers are naturally put at a disadvantage when there is no on-the-job training and when they are not given enough time off to get trained.

“There has been a rise in immigration but policy makers have been slow to catch up with this growth,” explains Christopher Punongbayan, deputy director at the Asian Law Caucus in San Francisco. “Some of these barriers are more endemic to the immigrant community. The Asian community, like all other communities, wants to be given the right to pursue the American dream.”

Labor or work-based violations usually do affect people of color and non-English speakers disproportionately. Because of similarities in the problems faced by the various ethnic groups, the CPA has allied itself with other communities of color, including African Americans and Latinos from organizations like People Organized to Win Employment Rights (POWER) and La Raza Centro Legal.

“We want to educate the community at large of these conditions that we are being faced with,” says Liu of CPA. “These illegal practices—of not paying workers the right wage and benefits—will run the community into the ground in the long run.  We don’t want that to happen.”

Crystal Carter is an independent journalist based in the Bay Area. Find more of her work at www.popscampaign.blogspot.com.

Related Stories:
Food
Jobs
Tweet
‹ Undocumented Immigrants Stand up to Chipotle up Farmworkers—The Basis and Bottom of the Food Chain ›