In this Issue, Who Owns Our Cities

In this issue of Race, Poverty, and the Environment we take a look at the fundamental power relationships that shape life in the urban United States. Who owns and who controls our public resources and how has the dividing line between public and private shifted over the last century? 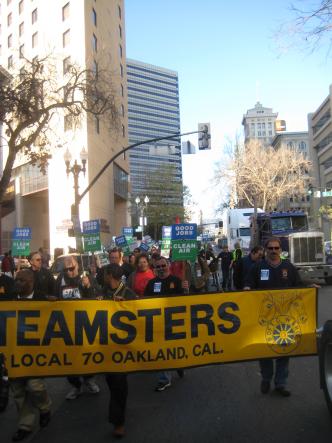 Roads, ports, parks, schools, libraries, community centers, public housing, government buildings, military bases, and digital rights of way are all nominally controlled by democratically elected bodies that are mandated to act in the public interest. But across the nation, a pattern of economic exploitation of public resources for private gain has undermined public control of these resources and increased the divide between rich and poor.

In this issue, Rick Cole, city manager of Ventura, California opens with a look at just what populist and progressive local politicians can accomplish and issues a clarion call for renewed citizen involvement. Carl Anthony, cofounder of Urban Habitat, spells out a vision for a livable city, and Amanda Witherell gives us a look at how privatizers are pulling profits out of public services. In Oakland, Jesse Douglas Allen-Taylor shares a textbook example of how democracy can still work to stop politically connected developers from appropriating public resources. James Tracy investigates the origins of spatial deconcentration as it applies to the poor, and how urban renewal becomes “urban removal.” Fred Blackwell offers ideas about how redevelopment can actually help reverse the black exodus from our cities. And Eloise Lee presents a case study from East Palo Alto, California where the city, working with nonprofit organizations, built a digital infrastructure that is truly accessible to the community.

The Starving Beast
“Starve the beast,” has been a right-wing prescription for reducing social spending since the mid 1980s. The formula calls for creating unbalanced budgets through huge tax cuts leading to anemic funding levels for public institutions, such as public education and public housing, which consequently appear ineffective in addressing their missions. Seth Miller shows us how this policy has played out in California since the passage of the infamous Proposition 13, which blocks local jurisdictions from raising property taxes. The Western Regional Advocacy Project details how, on a national level, similar funding restrictions have destroyed public housing and led to the national epidemic in homelessness.

Rather than analyze the real causes of homelessness, poverty, unemployment, or even traffic congestion, the right wing has argued that the substitution of corporate contractors for government employees is the path to greater efficiency and social progress. Hence, when cities are confronted with the challenges of urban development, the almost universal prescription has been to turn to private developers who clearly hold the initiative when it comes to designing and building—even on public lands.
Nowhere has this been more evident than in the rebuilding of New Orleans where public funds have been used to tear down public housing and subsidize casinos and hotels. Bill Quigley gives us a frontline report on the public housing debacle and Dr. Beverly Wright tells us just how determined the white elite is to retake the South—or at least, New Orleans. In these situations, large amounts of public money are placed in private hands, and of course, a certain percentage of it comes back to the political class as campaign contributions, or all too often, outright bribery. (The resignation of the head of Housing and Urban Development under a cloud is just one of many such examples.)

Of course, progressive forces in the United States haven’t simply capitulated to the ever-increasing power of corporate-government control of the public sphere. In city after city, we are fighting the good fight to build equity and justice into tax policy, planning processes, community benefits agreements, and public spending.

In this issue, we share with you the stories of the many organizations who are working on alternatives, such as land trusts, cooperatives, community gardens, base conversion agreements, and joint-use public school buildings. We also share stories of old-fashioned political activism on zoning and land-use, where municipalities do have the power to shape our cities’ futures.