David Harvey is a Marxist geographer and distinguished professor of anthropology at the Graduate Center of the City University of New York. He’s the author of several books, including The Limits to Capital and A Brief History of Neo-liberalism. 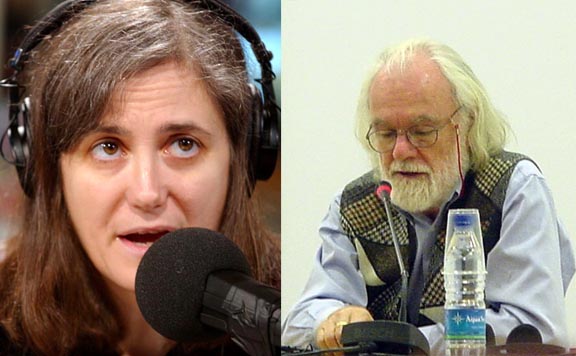 Goodman: Can you talk about what you mean by “the right to the city”?
Harvey: What I mean by the right to the city is that we have a real need right now to democratize decisions as to how a city shall be organized and what it should be about, so that we can actually have a collective project to reshape the urban world. Here in New York, effectively, the right to the city has been held by the mayor and the Development Office and the developers and the financiers. Most of us don’t really have a very strong say. The democratization of the city, of city decision-making, is crucial. And I think we want to reclaim the right to the city for all of us, so that we can not only have access to what exists in the city, but also be able to reshape the city in a different image, in a different way, which is more socially just, and more environmentally sustainable.

Goodman: What do you think of the proposals from the government regarding the financial crisis?
Harvey: What they’re trying to do is reinvent the same system. There’s a lot of squabbling on the details, but the fundamental argument they are making is, how can we actually reconstitute the same sort of capitalism we had and have had over the last 30 years in a slightly more regulated, benevolent form, but not challenge the fundamentals? I think it’s time we challenge the fundamentals.

Goodman: What are those fundamentals?
Harvey: The fundamentals have to do with the incredible increase in consolidation of class power. Since the 1970s, we’ve seen a tremendous increase in inequality, not just in this country, but worldwide. In effect, the assets of the world are accumulating more and more in fewer hands. When you look at the nature of the bailout programs, the stimulus programs and all the rest of it, what they really do is to try to keep those assets intact while making the rest of us pay. And so, I think it’s time we stop that and say, “actually, we should be getting more of the assets and much greater equality.”

Goodman: And how would we get more of the assets? How would there be greater equality?
Harvey: For example, the nature of the bailout of the banks and the sort of restructuring that is going on is about saving the banks and saving the bankers, while actually sticking it to the people. I mean, we’re the ones who are going to have to pay for this in the long run. So what I’m arguing for is a political awareness that this is happening.
In fact, it has been happening over the last 30 years, sort of step by step. It’s been disguised in this kind of rhetoric about individual liberty and freedom of markets. But if you look backwards, you will see that this is not the first financial crisis we’ve had. We’ve had many of them over the last 30 years, and they all have the same character. We had our own savings and loan crisis back in the 1980s. There was a Mexican debt crisis back in 1982 when Mexico was going to go bankrupt. And if they had gone bankrupt, then the New York investment banks would have gone under. So what did they do? They bailed out Mexico, therefore bailing out the New York investment bankers, and then they made the Mexican people pay.

Goodman: If you were the Treasury Secretary what exactly would you be doing?
Harvey: I would take a lot of that money, and I would put it into some kind of a national reconstruction corporation. And I would say, “Look, your first duty is to take care of the foreclosure crisis and the people who have been foreclosed upon. So go into cities like Cleveland and areas in California that have been devastated and take care of the foreclosure crisis.”xvc NB
One of the ways you could do that is to start buying out all of those houses that are about to be foreclosed on and put them into a municipal housing association or some collective form of that kind, and then allow people to remain in those houses, even though they’re no longer necessarily owners. So the ownership rights would shift.
What we’ve seen in the housing market is a tremendous plundering of the assets of some of the most vulnerable people in the country. I mean, this has been the biggest loss of asset wealth to the African American population that there’s ever been.

Goodman: What is the connection between gentrification and the mortgage crisis?
Harvey: The gentrification process here in New York was again about reconstructing urban environments. A lot of the reconstruction entailed a big investment in housing, particularly when it was corporate-led. You then have the problem of who’s going to buy the housing. And it’s not only gentrification, it’s also new development, new condominiums and all the rest.
It’s interesting. Finance controls both, the creation of housing and also its consumption. You lend money to the developers. They go in and gentrify a neighborhood. You then lend money to the people who are going to occupy it. You’ve got to find that market for gentrification once that process goes on. And so, the connection in this is that the financial operators are working both ends of this game.

Goodman: Were you for no bank bailouts?
Harvey: Well, I was in favor of solving the foreclosure crisis. You see, if you’ve solved the housing crisis, the banks wouldn’t be holding any toxic assets. If you had gone in and bailed out all of the people, there would be no problem on Wall Street. You wouldn’t have the foreclosures. So we should have gone in there right at the beginning and actually held down the foreclosure crisis.

Goodman: And why didn’t they?
Harvey: Because that would mean bailing out poor African Americans and people of that sort, and they’re not concerned with that. They’re concerned with protecting the bankers, not the people.

Goodman: Is there anything that gives you hope?
Harvey:  I think now people might see that this is what has actually been happening over the last 30 years—it hits you in the face straightaway. Something different has to happen. Some sort of movement has to come out and say, “Look, enough is enough. We’re not going to continue in this particular way.”

Goodman: What do you see as the role of social movements?
Harvey: Right now, it’s a desperate moment. In the sense that if we’re going to come out of this crisis, it’s going to be because of the formation of very strong social movements that say enough is enough. We’ve got to change the world in a very, very different way.

Social movements of this kind don’t form overnight. They take a little while. It’s interesting when you look back. In 1929, there’s the stock market crash. The social movements didn’t really start getting into motion until 1932. It took about three years. Right now, I think we’re in a legitimization crisis. They’re trying to rescue the system as is. And I think more and more people are beginning to say this is an illegitimate system, and therefore we have to think about doing something different. Out of that, various kinds of social movements will arise.

We have this relatively new movement called the Right to the City Movement. It’s here in New York City, and it’s in several other cities in the United States. There’s a national coalition. It’s small right now and it’s getting its act together. But these kinds of things can grow very fast, very quickly. So there  are likely to be many movements of that kind. In other countries, there are already quite massive social movements. [The United States] is a little bit behind on that trajectory.

Goodman: And what would you identify as those massive social movements elsewhere?
Harvey: In Brazil, for example, there is a Right to the City Movement around housing provision and a landless peasants’ movement, which is very active and successful in what it is trying to achieve. There’s a peasant movement in India, too, which is actually really quite strong.

There’s a real moment here, where we also have to think about these things connecting globally, which is, of course, where the World Social Forum originated. And so, there are ways in which we can start to think about coordination between different parts of the world.

Amy Goodman is host of Pacifica Radio’s Democracy Now! program where she conducted this interview. She is co-author of three books written with her brother, David Goodman: The Exception to the Rulers, Static: Government Liars, Media Cheerleaders, and People who Fight Back; and Standing up to the Madness: Ordinary Heroes in Extraordinary Times.