Worker centers vary in terms of their organizational models, how they think about their mission, and how they carry out their work. However, most share some core characteristics. Centers have a social movement orientation and organize around both economic issues and immigrant rights. They pursue these goals by seeking to impact the labor market through direct economic action, on the one hand, and public policy reform activity, on the other. They are enmeshed in the struggle for federal immigration reform and related issues like access to drivers’ licenses as well as housing, education, healthcare, and criminal justice issues. Many favor alliances with religious institutions and government agencies and seek to work closely with other activist groups in a variety of formal and informal coalitions.

The organizing and advocacy work that immigrant worker centers do is in three general areas:

Centers apply a variety of strategic approaches to their organizing and advocacy work. These include bringing direct economic pressure to bear on employers and industries (pickets, direct actions and boycotts, and much less frequently, job actions) and building political and community support for public policy reforms that require employers and industries to change their behavior.

The vast majority of worker center members are recent immigrants (including large numbers of undocumented workers) who labor in the worst jobs. Worker centers have had unprecedented success in developing leadership among these workers. They now provide a central vehicle through which low-wage immigrant workers are receiving services and education around workplace issues, participating in civil society, telling their stories to the larger community, and organizing to seek economic and political change. 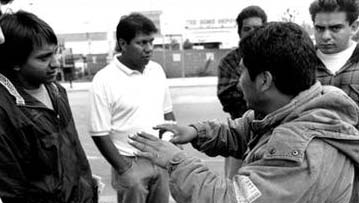 Most of the workers who contact immigrant worker centers are employed in low-wage industries. Immigrant worker centers have developed campaigns and devised some very creative and effective strategies to win lasting improvements for low-wage workers. The greatest accomplishment of these campaigns to date has been compelling individual employers to pay back wages to workers. Other campaigns have sought to hold large corporations responsible for the actions of their sub-contractors. Organizations have also won substantial economic improvements for low-wage workers by moving local and state government to require employers to raise wages and improve conditions of work via administrative action and public policy change.

While they often target particular employers as well as industries within local labor markets, worker centers are not work-site based. Unlike the traditional American union, most do not focus on organizing for majority representation in individual work sites or on negotiating collective bargaining agreements for individual groups of workers. Worker centers are hybrids that combine elements of different types of organizations—from political parties, settlement houses, immigrant civic organizations, community organizations and social movement groups to unions, feminist consciousness-raising organizations, and producer coops. In many centers, ethnicity and language, rather than occupation or industry, are the primary identities through which workers come to know and participate in the organizations. Ethnic identity and the experience of prejudice are central analytical lenses through which experiences in and the organization of the labor market as a whole, are understood by center organizers. Often workers come into a center because they live or work in its geographic area of focus, not because they work in a specific industry or occupation.

Because they are committed to going beyond advocacy to providing a means through which workers can take action on their own behalf, most centers place enormous emphasis on leadership development and democratic decision-making, putting processes in place to involve workers on an ongoing basis, and working to develop the skills of worker leaders, so that they are able to participate meaningfully in guiding the organization. Many identify strongly with the philosophy and teaching methods of Paulo Freire and other popular educators and draw upon literacy circles and other models that originated in Central and South American liberation movements.

Although they may relate to a much larger number of workers, most centers have fewer than a thousand members and they view membership as a privilege that is not automatic but must be earned. They require workers to take courses and/or become involved in the organization in order to qualify.

Centers demonstrate a deep sense of solidarity with workers in other countries and an ongoing programmatic focus on the global impact of structural adjustment, trade, and labor policies. Some worker center founders and leaders had extensive experience with organizing in their countries of origin and actively draw upon those traditions in their current work. Some centers maintain ongoing ties with popular organizations in the countries from which workers have migrated, share strategies, publicize each other’s work, and support each other as they are able.

The first worker centers were founded by Black worker activists in North and South Carolina, and by immigrant activists in New York City’s Chinatown, along the Texas-Mexican border in El Paso, and in San Francisco. They arose during the late 1970s and early 1980s in response to changes in manufacturing that resulted in worsened conditions, factory closings, and the rise of lower-paying service sector jobs. Disparities of pay and treatment between African American and white workers, as well as exploitation within ethnic economic enclaves and in the broader economy (including the informal sector) were also major catalysts for the creation of the first wave of centers.

The second wave of centers emerged in the late 1980s and early- to mid-1990s. They appeared as large new groups of Latino immigrants, some in flight from the Central American wars in El Salvador and Guatemala, came to live and work in urban metropolitan areas, as well as the suburbs, and growing numbers of Southeast Asians emigrated to the United States seeking work. Drawing on the first-wave centers for their organizational models, these groups were founded by a diverse set of institutions and individuals, including churches and other faith-based organizations, social service and legal aid agencies, immigrant NGOs, and unions. In fact, as a strategy for organizing in the non-union garment sector, the International Ladies Garment Workers Union (ILGWU) opened four worker centers in Miami, New York City, Los Angeles, and San Francisco.

From 2000 to the present, a new wave of centers has emerged. Many of the workers involved are from new chain migration streams from communities in Mexico who are reacting to the push factors of uneven economic development and hemispheric free trade agreements, and to the pull of plentiful jobs in the United States. Most of the centers continue to arise in the nation’s cities. However, more centers are being organized in suburban and rural areas and in southern states in response to the large concentrations of immigrants working in the service, poultry, meat-packing, and agricultural sectors. Also, more centers are emerging among recent Filipino, African, and South Asian immigrants, and more of them than in past waves are directly connected to faith-based organizations and unions.

The number of worker centers in the United States has increased dramaticall, paralleling the increased flow of specific immigrant groups in large numbers. In 1992, there were fewer than five centers nationwide. As of 2007, there are at least 160 worker centers in over 80 cities, towns, and rural areas.

Janice Fine is a member of the faculty at the School of Management and Labor Relations at Rutgers. Her book, Worker Centers: Organizing New Communities at the Edge of the Dream is available from Cornell University Press and the Economic Policy Institute.