The Fight for Quality Jobs: Our Battle Against Neoliberalism

Globalization is not a new phenomenon. The transatlantic slave trade was a manifestation of “globalization.” The carving up of Africa, Asia, and Latin America into colonies of Europe was a manifestation of “globalization.” Twenty-first century globalization shares some features with these previous eras, chief among them, the reality that the costs and benefits of a global economy are distributed unequally and, hence, our true challenge is building organizations and alliances with sufficient power to force a redistribution of these costs and benefits.

These issues of power and control are particularly important when fighting for quality jobs. Most jobs are not inherently good or bad; the key question for workers is the power to control the terms of work. Jobs in the auto and steel industries became “good” jobs because workers organized unions, which brought better wages, benefits, and dignity. Jobs in the casinos of Los Vegas became jobs that could sustain families because workers formed unions, and their collective action forced casino owners to redistribute their winnings. The victories of janitors in Houston, which led to the recognition of their union, will give them the power to improve their jobs.

There are two essential economic elements of twenty-first century globalization: the rapid movement of technology, capital, goods and services, and people across space (“the world is getting smaller”); and the subsequent changing of the global division of labor. Production, which used to be exclusive to the United States, Europe, and Japan can now take place in most countries throughout the world. Also, during previous globalization eras, dominant countries contained most manufacturing and colonies and other lands were sites of raw material extraction. Now, manufacturing can occur in countries with cheaper labor forces and the production of services play a larger role in the economies of the global North. In addition, these policies have led to a change in the relationship between corporations, governments, and workers. This new relationship can be called neoliberalism.

Neoliberalism and What it Means 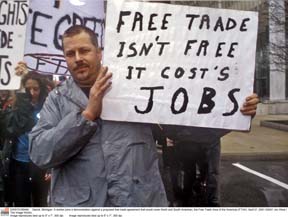 Key features of neoliberalism include a reduction in the role of government in regulating the economy; a greater role for the market in determining economic and social outcomes; and less protection for workers and citizens provided by governments. International economic institutions, such as the World Bank, reward countries that privatize national assets and balance budgets, even if these actions harm citizens. Transnational corporations seek those countries where markets are free of government regulations. The drive to balance budgets and have “business friendly” climates result in the elimination of needed social programs.

These features should sound familiar to activists in this country. Starting (with the Carter administration) in the late 1970s, the federal government has cut back its role in the economy and deregulated numerous industries, including trucking, telecommunications, and airlines. Local governments respond to insufficient revenue with cutbacks and contracting out. In the face of healthcare and pension crises, the Right calls for “market-based” solutions. Education is underfunded and welfare “reformed” to the point where former recipients are forced to take poverty level jobs.

What do these changes mean for jobs in the United States? Among the many impacts, three can be singled out. First, the rising importance of manufacturing in foreign countries means a greater role for the “goods movement” industry in this country. This industry includes the ports, which receive the goods, the trucks and trains, which move the goods off the docks, and the warehouses, which temporarily hold the goods. Second, the rising importance of a number of service industries, including hospitality, healthcare, and building services. A special feature of these jobs is that they cannot be shifted overseas because they involve people-to-people contact. Third, the strain on budgets cause local governments to use their land use policies to increase revenue streams. Thus, the retail industry becomes a special target for subsidies, with the resulting increase in retail jobs.

Given these domestic manifestations of neoliberalism, what lessons can be drawn by activists? Many advocates reference a so-called “Golden Age” of the United States economy between 1945 and 1973, when blue collar workers could earn decent incomes and the government had social programs to address poverty, healthcare, and retirement. In addition to the fact that this era was more complicated than depicted, it is important to note that the benefits of this period reflect a confluence of many factors, including the dominance of the United States in the international division of labor; the relative strength of labor, civil rights, and other social justice movements; and a range of social protections provided by the State. The first factor, United States pre-eminence following World War II, cannot be replicated. (Nor is it clear that we would want to return the world to such a state.) However, the other two factors reflect the conscious efforts of activists.

As we move forward, the battle for quality jobs in goods movement, services, and retail industries is a key arena where social justice activists should place their energies in the struggle against neoliberalism. Strong labor and social movements can indeed win direct concessions from employers and from the State, and force a redistribution of the gains from globalization.

Steven Pitts is a labor policy specialist at the University of California Berkeley Center for Labor Research and Education, where he focuses on strategies for worker organizing and labor-community alliances.

Related Stories:
Jobs
Tweet
‹ Economy in Crisis up The Great Corporate Job Scam: Money for Nothing ›