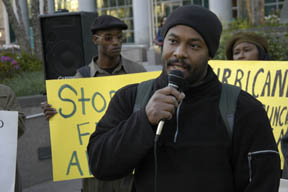 Last winter, the ground never froze in Brooklyn, New York. In January, I was digging up dandelions that had taken over my yard and preparing new flowerbeds.  Climate change is hitting close to home. The National Oceanic and Atmospheric Administration (NOAA) has predicted eight to 10 hurricanes in the North Atlantic Ocean this season—about half-a-dozen of them expected to be at least a category three. Katrina was a category three hurricane. So, New York could be the next New Orleans. One thing climate change makes clear: what happens to one community can happen to all—across neighborhoods, across cities, across countries.

But we can stop the tragedy of New Orleans from repeating itself. We can even turn New Orleans’ tragedy into an opportunity to understand better the human landscape that for so long has been sowed with the poisonous seeds of racism. By understanding and addressing the inequities brought on by structural racism, we can and will improve our environment in every possible way, including socially and economically.

Often, when we talk about global warming, issues of racial inequity are left out. We focus on “dirty” energy, our government’s failure to regulate corporate polluting and reluctance to create incentives for clean and renewable energy alternatives. We criticize our consumer culture with its insatiable appetite for SUVs, and our preference for suburban living with its long commutes. All of these are, of course, important factors in creating and perpetuating a climate crisis that is finally being acknowledged in the U.S., thanks to the hard work of environmental activists. While no one can say for sure that global warming caused hurricane Katrina, the science strongly suggests that storms are getting fiercer and more destructive because of carbon emissions. 1

A Hurricane’s Eye View of Global Warming
New Orleans has given us an opportunity to understand and address the racial causes and consequences of global warming. The broken levees are a metaphor for a weakened and fragmented government. Over the last four years alone, the US Congress has aggressively cut the revenue sources that enable government at all levels to invest in communities. Tax cuts of over a trillion dollars for the wealthiest five percent (annual income over $300,000) has meant severe cutbacks for disaster relief and a safety net.2 Consider, for example, President Bush’s proposed $708 million cut to the Army Corps of Engineers budget. A whopping $71.2 million of that money was earmarked for hurricane and flood prevention in New Orleans. Unfortunately, such budget cuts have become common and are part of a larger attack on federal responsibility for a social safety net.3

Public willingness to accept the notion of a small, limited federal government developed in the historical context of slavery. The more powerful slaveholding families used these concepts to oppose abolition.

The Republican Party’s infamous “Southern Strategy” of using racism to win the ideological fight for corporate prerogatives and limited social investments began in earnest in 1928.4 The limited government, self-help ideology translated into the explicit exclusion of Black people from the New Deal social safety net policies, like Social Security and unemployment benefits. Post-World War II government policies that created and preserved racially segregated white suburbs and the white middle class, intentionally excluded African Americans in particular, and people of color in general. (One of the many consequences of these policies has been the environmental degradation brought on by an increased dependency on automobiles to commute from suburbs to job centers.) It is still the case that public support for social safety net programs, like welfare, decreases if the perceived beneficiaries of such programs are African American.5

New Orleans (and the U.S.) by Numbers
In 1970, 54 percent of the New Orleans metropolitan regional population lived in the city, was much more racially integrated, and had fewer neighborhoods of concentrated poverty.6 By 2000, the city had only 36 percent of the region’s population—over two-thirds of which was Black7—indicating a loss of both jobs and revenues for New Orleans. In fact, between 1970 and 2000, the city saw a shocking 24 percent decline in jobs.

National and international studies show that fairer, more equitable countries and states have better environmental quality. Fairness and equality are measured by such indicators as income distribution, political rights, civil liberties, level of education, and access to healthcare.8 When we look at the major structural impediments to improving income distribution, political rights, and other indicators of a vibrant and healthy democracy in the U.S., we have to look at the policies affecting communities of color.

When entire communities of color are marginalized and excluded from a region’s civic and political life, they become invisible to the white communities. Whites will fight tooth and nail against the location of a waste treatment facility or an incinerator in their own neighborhoods, but accept their location in the “invisible” poor neighborhoods. (One example of an environmental insult is the attempt to create a landfill in the East New Orleans wetlands, strongly opposed by the Black and Vietnamese communities who wish to rebuild their homes there.)9  These privileged communities are thus able to avoid the questions raised by their unbridled consumerism and its effect on the environment.

On the other hand, if the government works to reduce poverty in urban communities of color, it has the effect of creating more jobs and reducing poverty in surrounding regions.10  When communities of color are able to participate in civic and political life, they are better able to attract investments to build and strengthen local economies and defend themselves against environmental insults.

Racialized Poverty and Global Warming
At a recent conference on the racial and socio-economic implications of the rebuilding of the Gulf Coast, Laurie David, a Hollywood producer and tireless anti-global warming activist, spoke passionately about the climate crisis we face and the importance of U.S. leadership on carbon emissions reduction. When asked about the role of racialized poverty in New Orleans, David responded that the reality of global warming was such that a lot of people will get hurt. David is certainly right, and we all have to care about climate change. But we also need to have a better answer to the question of race and poverty in global warming.

The floodwaters of Lake Ponchartrain washed away any illusions of a racially equitable society. Although about 28 percent of New Orleans’ population was poor, there were many more poor African Americans (35 percent) than poor Whites (11.5 percent).11 And  of all city dwellers, nearly one-third of all Black households did not have access to a car while only 10 percent of White households lacked auto access.13 While there were no evacuation plans for the poor, the elderly, and the disabled either, it was common knowledge that the lowest ground in New Orleans was occupied by communities of color, which made up nearly 80 percent of the population in these flooded neighborhoods.14 It is no wonder then that most of the faces in the Superdome were Black.

Racialized poverty puts the poor communities of color at the frontlines of our war with our planet. They are, as Professor Lani Guinier points out, our miner’s canaries. Their vulnerabilities shine a light on everyone’s vulnerabilities and we should pay careful attention to them when dealing with our public resources.

How do our Gardens Grow?
The environmental justice community understands that racial inequity is one of the biggest barriers to healthy communities and a healthy nation.15 Nature is not bound by governmental jurisdiction. It may, however, be influenced by race and political privilege. So it is up to the privileged, the resourced, and the included, to work with communities of color, and not  just for them. It requires funders to resource communities of color for civic engagement. It also requires us to build a public will for a government that will strengthen the social safety net for our most vulnerable communities and rein in corporate prerogative.

Our gardens all grow on the same soil. When we fortify the soil that has been starved of essential nutrients, we benefit all of our gardens.

Maya Wiley is the director of the Center for Social Inclusion.