A century ago, in a dusty corner of Tulare County, California, black visionaries planned and developed a town governed by its black residents. The settlers’ goal was utopian in the highest sense: to show the rest of the United States what African Americans could do in a secure self-governing community built by their own efforts without interference, harassment, or persecution. Their bold experiment attracted U.S. Army soldiers and veterans, small business owners, skilled artisans, professionals, and farmers from all over the United States. Residents named the town Allensworth to honor the colony’s founder and chief promoter, Colonel Allen Allensworth, whose life journey from slavery to a high rank in the U.S. Army epitomized the capacities and dreams of African Americans.

The town ran its own school that taught world history and fostered black pride, and was praised by the state superintendent of schools as the best school in the San Joaquin Valley. Residents practiced a deeply held but inclusive Christianity. They established institutions of self-government and participated in local government and civic life. They farmed and founded small businesses. The town’s fortunes were followed closely in the national black press. And even though many residents worked on neighboring white-owned ranches, they were committed to economic self-reliance for themselves, their families, and the Allensworth community.

Allensworth, like dozens, possibly hundreds of African  American towns in the South and Midwest, was a conscious effort to pursue the dream of freedom in an unrelentingly repressive society. Slavery had been abolished for 40 years, but the federal government abandoned Reconstruction in 1877, pulling out United States troops. Segregation was upheld by the United States Supreme Court’s Plessy v. Ferguson decision in 1895. State legislatures effectively disenfranchised black voters in the South, and the Ku Klux Klan terrorized black people, especially black landowners. Between 1882 and 1908, when Allensworth was founded, 3,347 people were lynched in the United States, according to the Tuskeegee Institute. 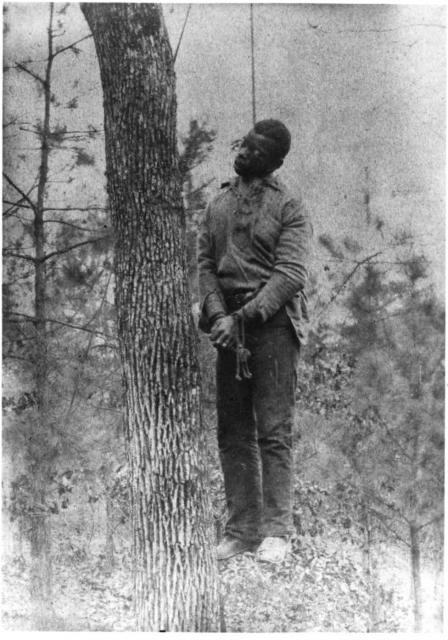 The vast majority were black men. Some mostly white towns went so far as to expel their black residents completely. In 1908, while Colonel Allensworth and his partners were buying land, a white mob in Springfield, Illinois, hometown of Abraham Lincoln, burned dozens of buildings in the African American community, lynched two men, and drove most of the 2,500 black citizens into the night.

Still, people were determined to find ways to make the most of their new-found freedom. Crusading journalists like Ida B. Wells exposed the crimes of lynching, and Negro political leaders proposed strategies for progress. In the late 1870s and beyond, tens of thousands of people founded self-governing African American communities, some in the South, more in the Midwest and the Oklahoma Territory. Between 1879 and 1881 alone, 60,000 people left the South. Historians estimate that as many as 100,000 people migrated between 1879 and 1910. Cartoonist and historian Morris Turner has identified more than 200 African American towns and settlements, most founded by people hungry for land and seeking a haven from white violence.

Two currents of thought guided the struggle for freedom. In the growing urban African American communities, the struggle focused on gaining equal civil rights, such as the right to testify against white people, to receive a public education in integrated schools, and to vote. W.E.B. Dubois and his followers articulated this strategy and embodied it in the National Association for the Advancement of Colored People (NAACP), founded in 1909.

Booker T. Washington was the chief spokesman for the emphasis on self-reliant economic development. Washington was criticized for not directly opposing segregation, but his ideas resonated with black businessmen and farmers all over the country. African American towns were laboratories for Washington’s strategy, and while Allensworth residents and practices supported both currents of liberation thought, Colonel Allensworth and other town founders saw themselves as followers of Washington.

Early residents had warm memories of life in Allensworth. Elizabeth Payne Magee, a daughter of town founder William Payne and the first teacher at the Allensworth school, told an interviewer, “One of the outstanding things I remember about Allensworth was the library. It was the best equipped small library that I have ever seen, and I spent many happy hours in there, reading and taking books out. And all of us read a great deal. There were no illiterate children in that area. Everybody read and enjoyed reading and studying, and we all sang, and many of us played instruments… it was an unique town.”
Helatha Smith, who also lived in Allensworth as a child, recalls, “We played croquet and we played ballgames with the boys. They were always running, playing blind man, and all of those crazy games where you got to run all over the place.

“We played baseball too. Sometimes the girls would play the boys and then other times we would play mixed. We had girls that were really good players. We had one girl, Cecelia Hall, she wasn’t afraid to try to stop a ball. She was good, she always played shortstop. Most of the girls would get out of the way as soon as the ball was going, but she wouldn’t. She’d just stop the ball.”

The people of Allensworth faced enormous obstacles, some faced by most small farming towns in agribusiness California, some particular to their lack of economic and political power: 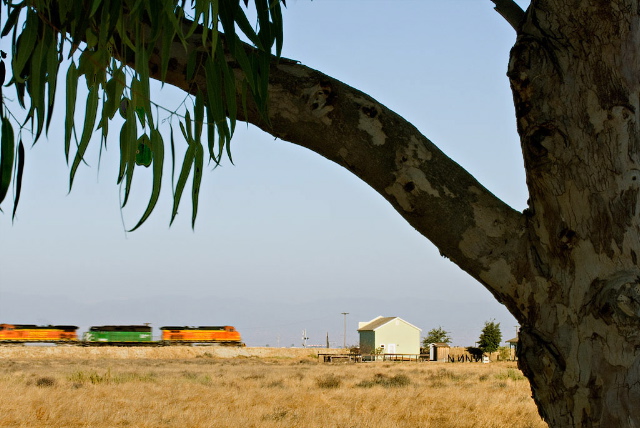 • Few land companies would sell to African Americans, and the town’s overpriced alkaline soil was not generous.

• The water supply dwindled and the land company reneged on its agreements to supply it.

• Farmers north of Allensworth built a spur line that took away the revenue from the grain depot at Allensworth; train traffic fell.

• In a completely unforeseen tragedy, Colonel Allensworth was killed by two white motorcyclists while walking on a Monrovia street.

• While the colony was still mourning the Colonel, the plan to found a vocational school at Allensworth was defeated by indifference in the California legislature and opposition from black leaders in San Francisco and Los Angeles, who feared that a school in Allensworth would undermine their efforts to integrate education.

The Disappearing Black Farmers
Black farmers were becoming an endangered population throughout the United States. Farm ownership declined steadily after 1920, when almost a million black farmers still owned land in the South. During the Great Depression of the 1930s, farmers in the South were forced back into sharecropping. In Allensworth, work on white-owned farms became the only work available. Cotton had come into the San Joaquin Valley and Allensworth became a place people lived in during the cotton season, and then moved on. 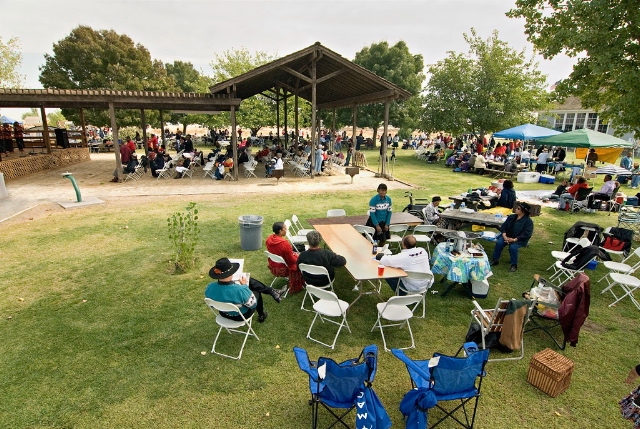 Today, in California as elsewhere in the United States, black people are overwhelmingly urban. There are fewer than 500 black farmers in the state; they mostly farm small acreages of specialty crops for urban farmers’ markets.
The struggle for African American economic equality has moved to the cities, but the history of Allensworth still resonates with black Californians, who have supported the town’s reincarnation as a state historic park.

In 1969, Ed Pope, who lived in Allensworth as a child in the 1930s, was working for the State Department of Parks and Recreation, preparing graphs and charts for the annual report on the state’s historic sites. “All the different ethnicities were represented, but nothing at all on black people,” Pope says. “I went over to the capitol and lobbied Merv Dymally and Willie Brown. By the time I got back to my office, my phone was jumping off the hook. Merv Dymally said, ‘What’s this about 127 sites and no representation of black people? Taxation without representation! Let’s get on it.’” Pope sums up the situation with a smile. “It was 1969. Not that much earlier, the Black Panthers had been in the Capitol Rotunda. Let’s just say the Legislature was in a listening mood.” The Park was dedicated in 1976, and more than 20 historic buildings have been painstakingly repaired or rebuilt.

Today the park comes to life during special events. Groups come by bus and train to absorb the history and imagine themselves living in the town. Docents in period dress portray early residents and explain the furnishings of the buildings and their use in daily life. 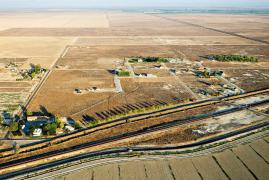 One frequent visitor told us this story: “I remember the very first time that I came through here, and the announcer—she was one of Allensworth’s granddaughters—said, ‘I’m going to tell you something —we’re family up here. Mothers, let your children go. We don’t have any axe murderers, we don’t have anybody who’s going to hurt them, let them go. This is their place. This is what I’m telling you. And if they do something, every parent here is going to take them back to you. We expect you to uphold what we have said.’ That did it. I said, ‘This is home!’”

The town of Allensworth still exists just south of the park. Its few hundred mostly Latino residents still struggle for a reliable water supply and a healthy environment. In 2007, townspeople and park supporters worked together to defeat a plan to permit two huge dairies nearby that would have added to air and water pollution problems. 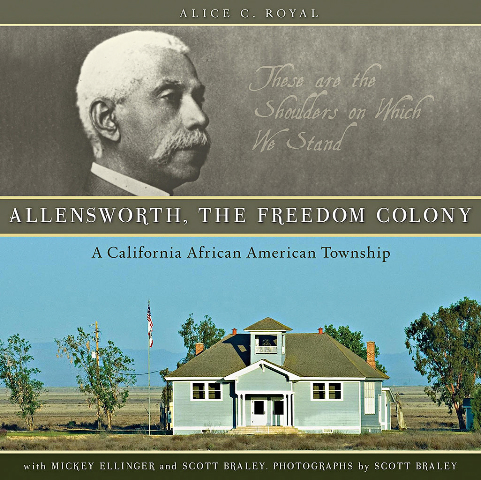 As lifetime resident Sam Pierro sums up, “Allensworth served as a beacon of light to people, because there’s a vein of struggle that goes through the black community. There are obstacles that seem insurmountable. When Allensworth founded the town, he was trying to build something to address that, because he was coming out of slavery, and what was happening to blacks continued on. They killed him six years after the town started. All the adversities that were stacked against Allensworth, they continued on. We had to face it, all the stuff that we had to undergo. But it gave us a certain strength; it was a blessing to us. A difficult life, but a blessing to us. I appreciate it. That gives me as a person something to hold on to.”

Mickey Ellinger is a freelance writer. Scott Braley is a freelance photographer. They worked with Mrs. Royal to create Allensworth, the Freedom Colony. Order the book from Heyday Books.