Transit Unions: Key Allies in the Struggle for Transportation Justice 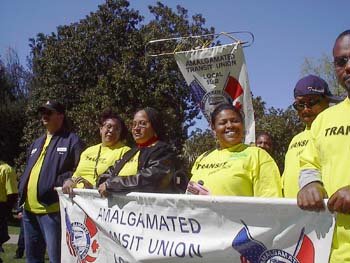 Since January 2003, Bay Area transit unions have attempted to coalesce into a force that can impact regional transit policy. TransitWorks was formed to support proposed legislation that would raise the bridge tolls in the region to generate revenue for a variety of transportation projects, which in turn would benefit the various financially strapped transit agencies.

Immediately, the unions began to mobilize their members to support the toll increase and generate public support for the measure. TransitWorks engaged in a variety of activities to promote the measure—holding press conferences, leafleting transit riders, even taking the unprecedented step of lobbying in the state capitol. These activities complemented the activities of other transportation advocates, and the measure became law.

Since then, TransitWorks and its participating unions have continued working together and with transportation justice advocates when necessary.  Recently, when Governor Arnold Schwarzenegger attempted to reduce funding for one of the local bus systems, the relationships developed between TransitWorks and community activists facilitated quick joint action, and the funding was restored.

Why Coalitions Are Critical
A transportation justice movement without labor as a key ingredient is a movement fated not to achieve its full potential.  Relative to other social justice organizations, unions have tremendous financial and human resources.  At its best, the labor movement uses these resources to successfully advance the needs of working people.  Beyond the issue of power, unions share another important commonality with most groups fighting for transportation equity: unions and these community-based organizations are fundamentally urban institutions whose greatest strength and potential base lie in cities. While the labor movement itself is a coalition of unions, one segment of unions which are natural allies of transportation justice advocates are transit unions.

Transit unions are natural allies of the transportation justice movement for several reasons.  In the policy arena, transportation equity demands both more funding and a re-allocation in funding.  Such changes would begin to redress racially disparate outcomes in the delivery of transportation services.  While it is clear why communities of color and low-income communities support transportation equity, it may not be readily apparent that unions representing mass transit workers have an interest in transportation equity as well.  But the fact is that local transportation agencies have responded to fiscal crises by slashing services, denying workers needed wage increases, laying off employees, and contracting out various aspects of the transit system.  Additional funding for urban mass transit and a re-allocation of funds toward buses and away from highways would help forestall these responses.  In addition, the members of transit unions are predominately workers of color, and their jobs are one of the few remaining jobs where working class kids with just a high school diploma (or some college) can find employment, which allows them to raise a family decently. To the extent that race and ethnicity are still salient ties that bind communities and facilitate struggle, transit unions representing workers of color will tend to identify with communities of color in attempts to address those communities’ basic needs.

The initial coalition building that has been accomplished through TransitWorks demonstrates the following lessons. First, the labor movement can be a powerful ally in the struggle for transportation equity. Second, coalitions can be very successful, but they require a great deal of slow, deliberate work. Third, these successes are difficult to sustain in the context of limited resources and the short-term thinking that dictates the actions of transportation justice advocates and transit unions. Last, but not least, especially in regions with multiple transit agencies and unions, a coalition of transit unions can be a precursor to the formation of a larger alliance between labor and communities united in the fight for transportation equity and social and economic justice.

Steve Pitts is a labor policy specialist at the University of California at Berkeley Labor Center, where he focuses on alternative strategies for worker organizing, and economic development and social policy with an emphasis on labor–community alliances.
Good Jobs First (www.goodjobsfirst.org) has published several reports documenting these shared interests.  See: “Talking to Union Leaders About Smart Growth” (2001); “Labor Leaders as Smart Growth Advocates: How Unions See Suburban Sprawl and Work for Smart Growth Solutions”(2003); and “The Jobs Are Back in Town: Urban Smart Growth and Construction Employment” (2003).