Breathe At Your Own Risk: Transit Justice in West Harlem 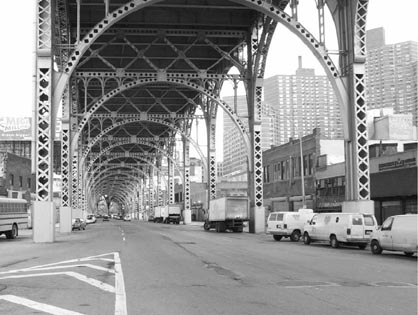 More than 15 years ago, community residents, ministers, and elected officials stood hand-in-hand with the newly-created West Harlem Environmental Action, Inc. (WE ACT) as we convened a press conference to offer a challenge to the most indifferent government entity in New York—the Metropolitan Transit Authority (MTA).

Those of us who have done battle with the MTA understand that they have “super” powers that leave them exempt from the basic standards other entities must follow. The MTA, a city- and state-directed entity, runs several commuter rail lines, as well as New York City’s subway and bus system. It operates the largest diesel bus fleet (4,000 vehicles) in the country, of which one-third is housed in Northern Manhattan.

We met in 1988 to protest the construction of a second bus depot in West Harlem—both adjacent to junior high schools—and we demanded that an Environmental Impact Statement (EIS) be prepared. Though the land had not been occupied since it had been a trolley barn years before, a judge ruled that the MTA was exempt from preparing an EIS.

At the time that we held that press conference announcing the filing of a lawsuit against the MTA, we were still struggling with City Hall and the city’s Department of Environmental Protection (DEP) over the poor maintenance and faulty operations of the North River Sewage Treatment Plant. In December 1993, we settled with the city for a $1.1 million community environmental benefits fund and designation of WE ACT as a monitor of the city’s $55 million consent agreement to fix the plant.

What we had realized early on in the North River struggle was that our predominately African American and Latino community of West Harlem was being used as a dumping ground for noxious facilities and unwanted land uses, all administered and operated by government entities. Environmental racism was the same in the other three Northern Manhattan communities where 87 percent of the residents are people of color.

With more than a half million people, Northern Manhattan covers only 7.4 square miles. It is located within four community districts—East, West, and Central Harlem and Washington Heights—each with its own Community Planning Board. Significant disparities in health status, access to services, health care, and the general quality of life exist among the various communities.

Considering that New York City’s asthma death rate is higher than that of any other city in the country, it would be accurate to refer to New York as the asthma capital of the United States. Since the Northern Manhattan community’s asthma mortality and morbidity rate is up to five times greater than the citywide average, and hospitalization rates for asthma are 21 times higher than in the least affected neighborhoods, New York City’s problem is Northern Manhattan’s crisis.

In numerous uptown neighborhoods, diesel bus depots are located next to schools, hospitals, recreational facilities, large housing complexes, and busy shopping districts. Because most of the depots are usually at or above capacity, dozens of buses are parked on the streets surrounding the depots, and during the winter months, many of them are left idling overnight. The impact of diesel bus soot is compounded by the fact that it is discharged at street level, where pedestrians are walking and breathing.

WE ACT realized we needed to develop a campaign on diesel buses and air quality. Through an EPA Pollution Prevention grant in collaboration with the Natural Resources Defense Council, WE ACT secured resources to initiate a plan. WE ACT developed a multifaceted bilingual ad campaign that included 75 Spanish and English bus shelter advertisements in communities in Harlem and Washington Heights that read, “If You Live Uptown, Breathe At Your Own Risk.”

Key elements of the campaign included a thirty-second public service announcement that aired on Spanish-language cable television and a bilingual informational brochure for residents. The brochure described the extent of the problem and possible solutions. In addition, buttons and stickers with the campaign’s slogan were developed and distributed to hundreds of residents. Other elements of the campaign included posters of the ad, maps with the location of each depot, and a large chart indicating asthma rates in Northern Manhattan, as well as the number of bus depots located in the area. Finally, thousands of postcards were signed by residents and sent to the Governor and the MTA demanding a fair share of clean fuel investments for the Northern Manhattan community.

WE ACT testified at several City Council hearings and MTA Board meetings in an attempt to influence the city’s policy regarding the purchase of clean-fuel alternatives for the city’s bus fleet. Thousands of residents signed postcards that were sent to the President of the MTA and the Governor. The cards demonstrated that there was a large constituency that was concerned about this issue and demanding action. WE ACT was also a part of a coalition of environmental groups that worked directly with the MTA on the selection of a Manhattan depot for conversion to natural gas. The goal of the coalition is to change the MTA’s diesel policy and to monitor the MTA’s capital plans and implementation of its clean-fuel commitments.

Media Campaign
One of our most successful campaigns has been "The Clean Fuel—Clean Air—Good Health Diesel Bus Campaign." We achieved our objectives, which were to:

The most important lesson of the campaign is that it takes thoughtful and comprehensive organizing, as well as resources, to carry out an effective campaign aimed at changing the practices of an institution. The campaign further underscores the importance of forming key partnerships. Furthermore, the campaign clearly demonstrates the willingness and eagerness of community residents to become involved in structured efforts to improve the quality of life in their neighborhoods. Finally, it demonstrates that community-based organizations are sophisticated enough to conduct an effective media campaign.

Securing adequate resources capable of funding a comprehensive and effective campaign is key. Educating community residents through means that they will understand and relate to is essential to getting their involvement. By increasing the public’s awareness of the issue you are essentially building its capacity to advocate for change. Any successful diesel campaign must seek creative, multifaceted approaches to capture the attention and the passion of the affected community. A successful campaign offers ordinary people practical avenues for participating in efforts to bring about change.

Because of WE ACT’s efforts to heighten the awareness of Northern Manhattan residents about the dangers of diesel fumes, local residents are now identifying this problem as a key quality of life issue. This has undoubtedly been one of our organization’s most successful campaigns because the people most affected by the disproportionate siting of these hazardous facilities have become their own best advocates.

With local residents making this issue a priority, elected officials are attempting to be more responsive, other organizations are offering support, and members of the local media are doing stories that provide increased exposure. As a result of WE ACT’s advocacy and organizing, the residents of Northern Manhattan are evolving into a constituency that is informed, organized, vocal, and unwilling to accept unfair policies that fail to protect and value their health and quality of life.

Peggy Shepard is the co-founder and executive director of West Harlem Environmental Action, Inc.
This article is adapted from an essay published by The Environmental Justice Resource Center (EJRC) at Clark Atlanta University (http://www.ejrc.cau.edu/voicesfromthegrassroots.htm) with the permission of the author.