The Science of Precaution

Environmental justice activists commonly complain about incompatible land uses that put community residents and polluting industries close to one another. Environmental Health Coalition (EHC) and residents of Barrio Logan in San Diego have advocated for more than 15 years to remedy land use dilemmas through such strategies as re-zoning; moving or shutting down small industrial facilities; and implementing maximum pollution prevention for large industries that cannot move such as shipyards.

Land Use in Logan
The Logan area is an historic neighborhood southeast of downtown San Diego. Since early in the last century, Logan has been a low-income Latino community. Median household income in Logan in 1990 was less than half the median in San Diego County as a whole.

During the 1960's the community was bisected by the I-5 freeway. The small portion of Logan that lies west of the freeway is Barrio Logan. Like many older, inner city neighborhoods, Barrio Logan has an incompatible mix of land uses that includes large and small industries, homes, freeways, railroad tracks, schools, Navy facilities and parks. It’s located adjacent to San Diego Bay, exposing the community to tons of diesel exhaust from ships and trucks going to and from the Port of San Diego. Some 129 industries with regulated hazardous materials coexist with its 5,440 residents in an area of less than 1.2 square miles.

EHC recognized that proximity to major roads and freeways that cut through the community was a major concern. A majority of Barrio Logan residents live within 500 feet of a freeway or major road. Since the mid-1980s, EHC has worked in the Barrio Logan community to gather information about air quality. As EHC documented the results of the mixed use zoning that prevails in Barrio Logan, it became aware of probable health hazards to residents from toxic air emissions from a wide variety of businesses located nearby, often next door to homes. Residents told EHC that their children seemed to suffer more asthma, upper respiratory infections, and skin and eye disorders than they had in other communities.

Research and Results
EHC recognized that an air toxics monitor was critical to determining the severity of air quality in the Barrio. EHC appealed directly to the State agency that oversees the local air pollution districts, the California Air Resources Board (ARB). ARB was already engaged in neighborhood level air toxics monitoring in Los Angeles, was familiar with environmental justice concerns, and had a monitor available. In the months that followed, the decision was made by EHC and ARB to place a monitor at a middle school, Memorial Academy, situated about a half-mile from the largest shipyard and two blocks from a major freeway. 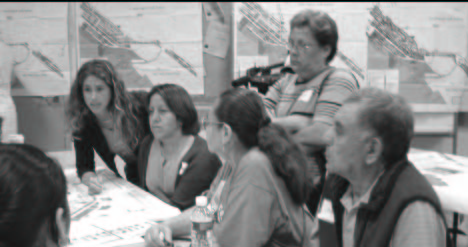 Chrome platers and their hexavalent chromium emissions had been identified by EHC and community residents as a cause for concern for more than a decade. Standard computer models of dispersion of air emissions cannot accurately predict the concentration of pollutants very close to the source, yet there are residents living within 10 feet of the plating shops in Barrio Logan. Monitoring at Memorial Academy did not resolve the question of whether hexavalent chromium was present at high levels near the emission sources. Accordingly, ARB agreed to place six monitors at residences located within 200 feet of two chromium platers on Newton Street in Barrio Logan.

Monitoring was conducted from December 2001 through May 2002. High levels of hexavalent chromium were measured at the monitors near the plating shops on Newton Street. The highest levels were found in the front and back yards of one home situated immediately between the two platers. The ARB was so alarmed by the results that it issued a press release and sent a notice to the San Diego County Public Health Officer. Then the agency conducted extensive follow-up monitoring of indoor and outdoor chromium levels at both plating shops, Master Plating and Carlson & Beauloye. The average level at the backyard monitor over the entire monitoring period corresponded to a lifetime cancer risk of 114 per million, which is several times higher than federal standards for an acceptable cancer risk.

ARB and APCD also tracked the measured levels of chromium in relation to the levels of electroplating (measured by amp-hour readings), maintenance and cleaning procedures, and other activities at the shops. Analysis of the data persuaded ARB that Master Plating was the more likely source of the high outdoor levels of chromium. Subsequently, the County of San Diego filed a lawsuit against the owner of Master Plating on March 15, 2002. A temporary restraining order stopping the chrome plating operations was issued ten days later.

Shift in Strategy
The final impetus to shut down Master Plating followed an intensive air monitoring effort that cost the State government more than a million dollars. Unprecedented media coverage of the chromium findings, and election year politics, also figured into the outcome. However, because of the expense and effort, this is clearly not feasible as a routine method for addressing the thousands of other communities plagued by incompatible land uses. Dozens of facilities like Master Plating exist in Barrio Logan’s residential neighborhoods. Because local residents can’t wait for problems to be addressed one by one, incompatible land uses and environmental harm must be addressed from a broader perspective.

Historically, cities and counties have allowed industrial activities to occur in communities of color without regard to health and safety of residents. This echoes the pattern seen throughout the country, where less desirable land uses are placed in neighborhoods with the least political clout to challenge them. The challenge today is to reverse these discriminatory land use patterns.

EHC is committed to making sure that the closure of Master Plating is the kickoff to the elimination of toxic pollution from this community and other disproportionately affected communities. The shift to land use planning as an approach to protect community residents from toxic hazards is a precautionary model, one that aims to identify and prevent probable toxic hazards. In our precautionary land use planning process, we are using available scientific data on air emissions and presence of toxic substances to develop priorities—not to “prove” with absolute certainty that people are being harmed. The presence of facilities that emit chromium or diesel exhaust close to homes and schools in the Logan community almost certainly exposes residents to harmful compounds. Development of a community plan to phase out facilities that are close to residences or schools conforms with key aspects of the Precautionary Principle—i.e., to err on the side of safety and to include in decision-making the voices of those exposed to hazards.

Outcomes and Future Organizing
EHC and Barrio Logan residents’ efforts are having a direct impact on the community’s health and quality of life. Their work helps form the basis for the following state and federal policy changes: