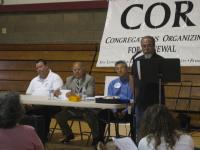 I've never really been involved in something outside my family,” says Dan Martinez, a 33-year-resident of San Leandro, who is working for affordable housing near transit with Congregations Organizing for Renewal (COR) and Urban Habitat’s Transportation and Housing program.

Community members are encouraged to get involved through COR’s organizing model, which builds on one-on-one conversations. “One-on-ones” draw out each person’s concerns and explore how COR might address those concerns.

Dennis Davis is the deacon of St. Leander’s Catholic Church, which has been a COR partner for about four years. He says that one-on-ones help social justice movements to reach outside the small activist groups that traditionally agitate for change.

“They give an individual a safe place to express their feelings and to hear what we’re presenting,” Davis says, adding that one-on-ones offer nonpartisan education about issues.

COR begins a campaign only after assessing an area’s needs through these conversations with community members. Beginning with one-on-ones ensures that the issues COR campaigns around, such as the lack of affordable housing, tackle residents’ greatest concerns. As the campaign continues, one-on-ones continue to raise individuals’ awareness of the issue, whether or not people choose to become further involved.

In San Leandro, the issues have always been housing and health care. Over two years, using the one-on-one organizing model, COR built the support and momentum needed to pass a 2006 inclusionary zoning ordinance that requires 15 percent of units in the all new residential developments in the city to be affordable to moderate-, low-, and very low-income households.

COR is now partnering with Urban Habitat to strengthen affordable housing provisions in San Leandro’s downtown through a Specific Planning process. The downtown is both amenity- and transit-rich. In addition to BART and local AC Transit service, a high-speed Bus Rapid Transit route will connect Berkeley, Oakland, and San Leandro in 2009.

Downtown’s transit access makes it the best place to build housing for low-income families. Transportation represents the second-highest cost after housing—Bay Area working families spend the most on housing and transportation of any other region in the nation. By placing subsidized housing in downtown San Leandro, the city will be creating needed savings for families in both their housing and their transportation budgets.

Urban Habitat Partners with COR
Urban Habitat and COR are partnering to ensure that COR’s members are well-prepared to weigh in on the Specific Plan. Community members are powerful spokespeople for the cause, using their own experiences to illustrate how affordable housing can benefit community members. They meet with each other in local organizing committees and with elected officials and city staff in research actions. They are the ones who ask the questions and get the answers.

Martinez, who became involved with COR because his children could not afford to live in San Leandro, spoke about his children at a meeting with a city council member early in his involvement. He was encouraged. “The councilwoman was touched by [my story]. She had the same situation in her own family.” Testimony by Martinez and Davis also helped convince members of the Citizen Advisory Committee responsible for developing a draft of the downtown Specific Plan, to increase supportive language for affordable housing within the draft that will go before City Council for a vote in September. Their testimony spurred the Mayor of San Leandro to make strong statements supporting affordable housing to the Committee.
Raising public awareness and having community members demonstrate personal investment gives officials political protection, says Davis. When constituents show how lack of affordable housing affects them and their families, politicians can take action.

Community education also appeals to potential developers. One company that plans on redeveloping a major site within San Leandro’s downtown recently met with COR and community leaders to discuss including housing for working-class and low-income families, and affordable childcare in its project. Public education and involvement—beginning with one-on-ones and leading to public meetings—mean that the opposition that often arises in response to affordable housing developments may be prevented or moderated. COR-developer cooperation early on in the process helps COR to win affordable housing and services and the company to gain the community support it needs for its project.

On the ground, local organizing committee meetings allow leaders to practice articulating their needs and priorities among friends and other church members. COR organizers also meet with individual leaders to discuss the roles the leaders have played in local organizing committee meetings and research actions. Leaders are encouraged to conduct one-on-ones and to participate in other campaigns and actions.

Dan Martinez has become much more politically aware since joining COR, he says. Last fall he worked a phone bank for Prop. 86, which would have levied an additional tax on cigarettes. One man he called was smoking at the time, but said he would vote for the proposition anyway. It was heartening “to try to get people involved in the community in that way, by their vote.”

Martinez wouldn’t call himself a leader, though he puts in three to four days a week during especially active campaign times and speaks at COR meetings with city councilmembers. He’s only been involved with COR for eight months, he explains.
By other standards, though, Martinez may be a leader. Deacon Davis believes that a community leader is someone “who brings information to people… with a life experience, so that when people hear them speak, they see their own history.” By speaking out at public hearings and in small group conversations with San Leandro’s decision-makers, Martinez has already helped convince individuals of the need for affordable housing. The Mayor’s testimony and Citizen Advisory Committee endoresement of stronger language supporting affordable housing in the downtown Specific Plan is evidence enough.

Cara Bertron is an environmental consultant and former intern for Race Poverty and the Environment.