Honoring the Spirit of Brown 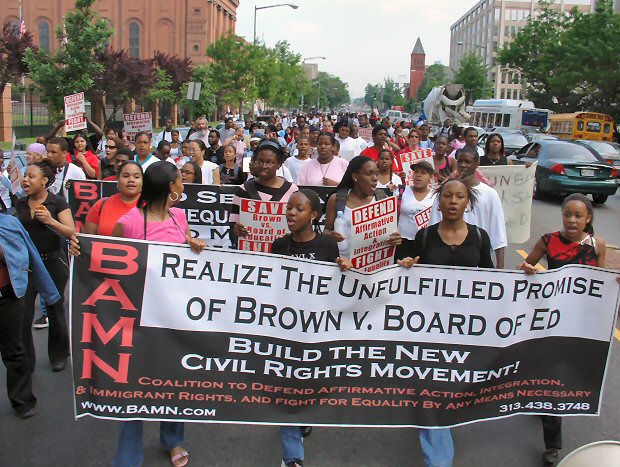 As a law student years ago, I learned the elementary principle every law school teaches: Without context, the law is only words on paper. History gives law meaning; to follow the letter of the law without honoring its spirit is to lose the flower of justice in the weeds of formalism. It’s a fundamental lesson that appeared lost in the recent United States Supreme Court decision striking down voluntary integration plans in the Seattle and Louisville public schools. Chief Justice John Roberts, who wrote the Court’s decision, took pains to justify his conclusion that the school districts’ plans were unconstitutional by quoting from legal briefs filed in another watershed case about integration: Brown v. Board of Education.

But what of the historical context of Brown? Had Roberts forgotten that Thurgood Marshall, the African American lawyer and future Supreme Court Justice who argued the Brown case, was urging the Court to breathe spirit into the letter of the Constitution’s promise of equality for all and chart a brave new course for the nation? That the crisis of segregation was so alarming and so damaging that the Court’s decision would define us as a nation? That Chief Justice Earl Warren, who penned the Brown decision, worked tirelessly to convince all nine justices—who hailed from both the North and South—to sign onto the majority opinion so that the Court could speak with one, powerful voice in repudiation of the archaic doctrine of “separate but equal”?

Unlike the unanimous decision in Brown, the Court’s recent decision was bitterly divided. And it is no wonder.
For several Justices, Robert’s use of Brown to dismantle efforts to achieve the very integration that Brown had promised was a distortion of Brown’s unifying legacy—a “cruel irony,” Justice John Paul Stevens wrote in dissent. “The Chief Justice rewrites the history of one of this Court’s most important decisions,” Stevens said.

Justice Stephen Breyer, in an emotional opinion read from the bench, reminded his colleagues: “In this Court’s finest hour, Brown…challenged th[e] history [of segregation] and helped to change it.”Brown, said Breyer, held out a “promise of true racial equality—not as a matter of fine words on paper, but as a matter of everyday life in the Nation’s cities and schools.”
Justice Anthony Kennedy rejected Roberts’ simplistic application of the letter of Brown as “too dismissive of the legitimate interest government has in ensuring all people have equal opportunity regardless of their race.” In his separate opinion, Kennedy wrote: “The enduring hope is that race should not matter; the reality is that too often it does.”

History teaches us that far from ignoring race, the Brown Court explicitly used race as a tool of inclusion. And recognizing the significant social context in which the Brown decision was made, later courts upheld the use of race to integrate, equalize, and harmonize society, instead of allowing segregation to persist.

On this score, the recent Supreme Court decision was a major setback. In ruling Seattle and Louisville’s voluntary integration plans unconstitutional, the Court threw a steep hurdle in the path of local school districts seeking to create racially diverse learning environments for all children.

Both integration plans were carefully crafted and effective, involving limited use of race and only after other factors were considered. Nonetheless, the Court rejected the plans and, in doing so, further limited the role that race can play in making student assignments to schools. It is particularly troubling that four of the Supreme Court justices who joined in striking down the plans would eliminate virtually all effective tools for dismantling racial isolation and achieving integration in public schools.

All is not Lost

Although he concurred with Roberts’ conclusion that the Seattle and Louisville plans were unconstitutional, Kennedy clarified that Roberts’ opinion implied “an all-too-unyielding insistence that race cannot be a factor in instances when, in my view, it may be taken into account.”

Kennedy’s words leave the door ajar for school districts trying to implement voluntary integration plans that fulfill both the letter and spirit of Brown. And, fortunately, a majority of the Justices reaffirmed that the government has a compelling interest in avoiding racial isolation and achieving racial diversity in public schools. The Court made clear that a range of affirmative measures, including some race-conscious measures, are still available to school districts seeking to achieve diversity in their student body.

This is particularly important here in California, where, in the shadow of Proposition 209, public schools are as segregated today as they were nearly 40 years ago.

Despite this challenge, there are examples of success. Earlier this year, an Alameda County Superior Court judge threw out a legal challenge to Berkeley Unified School District’s elementary and high school student assignment plans, finding that the district does not violate state law by considering the racial demographics of students’ neighborhoods along with other factors in assigning students to schools.

This was the second time in recent years that Berkeley’s integration efforts have come under attack—and survived the challenge. Last time Berkeley prevailed, in April 2004, the judge ruled: “Although Proposition 209 specifically applies to public education, its text does not mention voluntary desegregation plans or otherwise indicate that prohibited discrimination or preferential treatment includes a race-conscious school assignment plan that seeks to provide all students with the same benefit of desegregated schools.”

In his dissent, Justice Breyer warned that the Court’s recent decision will be one that “the Court and the Nation will come to regret.” But we don’t have to live with such regret.

We all have a role to play—parents, advocates, school administrators, elected officials—in continuing the hard but critically important work of integrating public schools, so that students from all backgrounds will benefit from a diverse educational environment and be better prepared to effectively function in our increasingly diverse society and global economy. Let’s maximize the tools we still have available to promote equal opportunity and inclusion in our schools.

Maya Harris is the executive director of the ACLU of Northern California. The ACLU is representing Berkeley Unified School District parents in supporting the district’s student assignment plan.

Download or view a pdf of this article (259KB).