In the writing of this piece, we gained a new appreciation for the essential leadership role that Black women play in pushing for Ban the Box and other criminal justice policy reform. As the fastest growing prison population, and the ones supporting incarcerated folks from the outside, we acknowledge the impact the system has on women’s lives and are grateful for their advocacy. Both John and I are committed to following the leadership of formerly incarcerated people, and believe policy change will take the work of both directly impacted folks and supportive advocates. 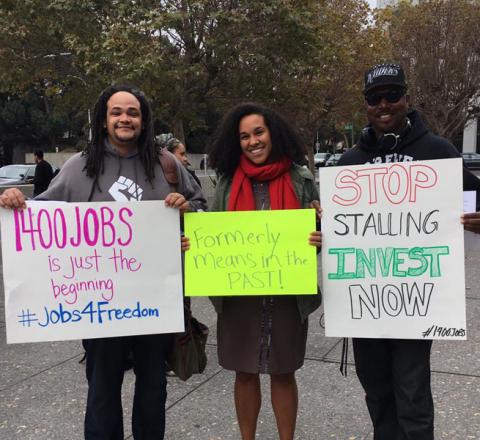 When John and I first met in 2014, I was working with Lift Up Oakland, a coalition of community and labor organizations leading a ballot initiative that would raise Oakland’s minimum wage to one of the highest in the country and provide sick time to all workers. John was working as a security guard at a fast food restaurant downtown and had recently been released after spending one-third of his life in prison. He was committed to creating a stable home for his son, and we bonded over a shared belief that obtaining a good job is a critical component of realizing this commitment.

It didn’t take long for John to become a key leader the minimum wage campaign. He was making $10/hour with no sick time or benefits in one of the most expensive regions in the country. This job didn’t provide John with the means to care for his family, but it was the only job he could get as a convicted felon. It didn’t matter that he was an FAA licensed aircraft mechanic; employers saw John’s record and immediately moved his resume to the “no” pile. We knew that raising wages was one important solution, but it wouldn’t be enough. We must put an end to discrimination against formerly incarcerated people when they look for a job.

Studies show that one of the most important factors for success after incarceration is good paying, stable employment. Yet, formerly incarcerated people are regularly discriminated against in the hiring process once they check the box on the job application asking about criminal history. A recent study concluded that only 5% of African American applicants with a criminal record get a call back from the employer after submitting the application. Subsequently, formerly incarcerated people are left with only losing choices: chronic unemployment, low wages they can’t survive on, or returning to the street economy. No wonder recidivism rates are so high at 45 to 61 percent.

With the criminal justice system’s disproportional impact on people of color—1 in 3 Black men is likely to be incarcerated in his lifetime and 95% of all prosecutors are White—barriers to job access post-incarceration also becomes a serious racial justice issue. Even without criminal history as a factor, people of color are over-represented in lower-wage industries like hospitality, food service, retail, security, and warehousing and transportation. Formerly incarcerated people experience the double barrier of hiring discrimination based on their past and occupational racial segregation that concentrates them into low wage work and limits their earning potential.

While a person is incarcerated, research shows that their family members-—especially Black women—suffer significantly by paying the price of fees, fines, visits, costly phone calls, and commissary support. When the incarcerated member returns home, household income also has to stretch further to make up for lack of job access, which leads to stress, strained relationships with partners and children, and loss of quality family time.

Because of the profit-driven system of mass incarceration, 70 million people in the United States have a criminal record. In Alameda County, 375,000 (1 in 4 residents) have an arrest record. Positive sentencing reforms, like Prop 47 in California, will also increase the number of returning citizens who are ready to work. Our best chance at real public safety, community stability, and a thriving economy is to ensure those 70 million with a criminal record receive a fair chance at a good job.

There is a growing movement to “Ban the Box” which removes questions of criminal history from employment applications. Twenty-four states have adopted a Ban the Box policy, and 9 states and 14 jurisdictions have a Ban the Box policy that applies to private sector employers. In California, Assembly Bill 1008, which requires private sector employers to ban the box statewide was signed by Governor Brown’s in October 2017. 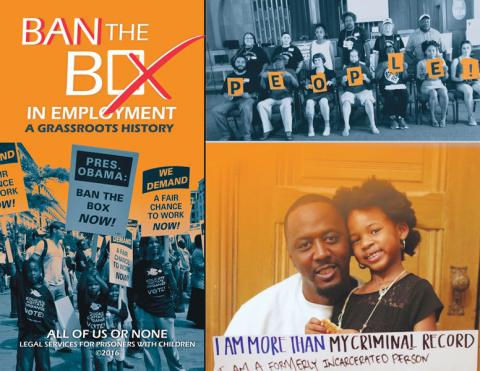 Locally, John and I are working with Revive Oakland, a coalition of community organizations, clergy and labor unions, to ensure that the Port of Oakland’s new state-of-the-art logistics and warehouse complex has a strong Ban the Box policy that not only removes questions about criminal record from the job application, but also limits employers to conduct background checks only when absolutely necessary to the position. Revive Oakland’s proposal also requires the employer to consider the context and circumstances of the conviction; including the person’s age at the time of the offense, how much time has passed since the conviction, efforts to rehabilitate, and whether or not the conviction even relates to the job requirements or is indicative of future behavior on the job.

We’ve been thinking a lot about why some employers see a criminal record as an excluding factor. While there may be some legitimate concerns related to particularly sensitive positions, in general, there are no valid reasons why formerly incarcerated people would make worse employees. As John points out, he was steadily employed in prison for a private employer, making pennies per hour. Working under those conditions makes his work ethic and drive stronger than most. Because many private corporations use exploited prison labor, inmates are already handling sensitive information and doing the jobs they might apply for once released. Ironically, some companies are using prison labor, but discriminate against formerly incarcerated people. For example, AT&T has used inmates to staff call centers, yet one of the formerly incarcerated community members John and I work with was fired from the company for being on parole.

Under the Trump Administration, we live with the constant rhetoric that Black and Brown people are criminals; that we must be jailed, deported or even banned all together. As part of our resistance work, we must not only fight Trump’s detrimental policies that implement this narrative, but continue to advance our own progressive policies that take steps forward in dismantling cycles and systems of injustice. In addition to Ban the Box for employment, we must Ban the Box on housing so that returning citizens are not excluded from an affordable place to live. And perhaps our most meaningful work is to put an end to costly, ineffective punitive punishment all together, and move toward more restorative justice practices.

If formerly incarcerated community members may have made mistakes in their past, they’ve certainly served their time. To prevent them from working is to continue to punish them—and their families—in the present. Ban the Box is a critical tool we can use right away to open up access and reduce discrimination while we continue to fight for an end to state sanctioned violence and mass incarceration. The scarlet letter of past incarceration not only denies us employment, housing and civic participation, but perhaps most detrimental, it denies us our full humanity and dignity.

Jahmese Myres is a deputy director with the East Bay Alliance for a Sustainable Economy and a planning commissioner for the City of Oakland. John Jones III is an Oakland native and a life coach with Communities United for Restorative Youth Justice. We want to express our gratitude for organizations led by formerly incarcerated people including Communities United for Restorative Youth Justice  and All of Us of None; and legal advocates National Employment Law Project  and East Bay Community Law Center.