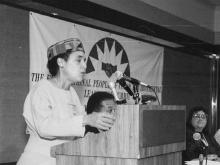 Rarely do people get the opportunity to participate in historic events. But each of the 300 African, Latino, Native and Asian Americans from all 50 states who gathered for the first National People of Color Environmental Leadership Summit in late October must have left with a sense that the atmosphere in which environmental issues are debated and resolved is changed for good. And for the better.

Joined by delegates from Puerto Rico, Canada, Central and South America, and the Marshall Islands, those present at the October 24-27 meeting in Washington, DC, set in motion a process of redefining environmental issues in their own terms. People of color gathered not in reaction to the environmental movement, but rather to reaffirm their traditional connection to and respect for the natural world, and to speak for themselves on some of the most critical issues of our times.

For people of color, the environment is woven into an overall framework and understanding of social, racial and economic justice. The definitions that emerge from the environmental justice movement led by people of color are deeply rooted in culture and spirituality, and encompass all aspects of daily life—where we live, work and play.

This broad understanding of the environment is a context within which to address a variety of questions about militarism and defense, religious freedom and cultural survival, energy and sustainable development, transportation and housing, land and sovereignty rights, self-determination, and employment.

For instance, it has been known that communities of color are systematically targeted for the disposal of toxic wastes and the placement of this country’s most hazardous industries—a practice known as “environmental racism.” Three out of five Black and Hispanic Americans live in communities with uncontrolled toxic waste sites, while about half of all Asian/Pacific Islanders and Native Americans live in such areas. Government, church and academic research has confirmed that race is the strongest determining factor (among all variables tested) in the location of commercial hazardous waste facilities.

Even armed with this knowledge, delegates were shaken by the reports of widespread poisoning, oppression and devastation that communities of color are experiencing—including water, air and land contamination, which cause cancers, leukemia, birth defects and miscarriages.

All present were moved by the testimonies of communities, such as Reveilletown, Louisiana, a 100-year-old African American community that was forced to relocate in 1989 due to poisoning from neighboring industries. Even more disturbing were the accounts of the Carver Terrace subdivision in Texarkana, Texas, and the farmworker housing project in McFarland, California, that were built on top of abandoned chemical dump sites.

Economic constraints make it difficult for residents of these communities to “vote with their feet” by moving away from the contamination. Demands for relocation assistance from the government have gone unheeded.

Delegates despaired at learning how Native Americans die at each stage of the development of nuclear energy and nuclear weapons, but were energized by hearing how reservations are fighting back. Among the stories told were those of the Havasupai Nation of Arizona and its organizing against uranium mining in the Grand Canyon; of Native Americans for a Clean Environment’s efforts to close Sequoyah Fuels’ nuclear conversion and weapons plant in Oklahoma; and of the Western Shoshone’s civil disobedience aimed at stopping the U.S. government’s underground nuclear testing on their ancestral lands in Nevada.

These struggles, some of them more than 15 years old, dispel the myth that people of color are not interested in or active on issues of the environment. On the second day of the Leadership Summit, delegates were joined by another 250 participants and observers from environmental, civil rights, population, health, community development and church organizations. In addition, academic institutions, labor unions, legal defense funds and policy makers were represented. Some came to learn, others came seeking partnerships and strategies for coalition-building.

The issues of partnerships between people of color and the environmental movement was a major topic of discussion during the summit. So-called mainstream environmental organizations are now in a flurry to diversify by actively recruiting African, Latino, Native and Asian Americans to sit on their boards and to staff their offices. Many delegates feel that the push towards inclusion is a result of the challenges brought by people of color, in particular a series of ground-breaking letters sent in early 1990 to the national environmental and conservation organizations by the Gulf Coast Tenants Organization and the Southwest Network for Environmental and Economic Justice.

These letters and the publicity that followed outlined what is perceived as the racist practices of the green movement—which is generally viewed as white, middle- and upper-class, and insensitive to the needs and agendas of people of color. The letters point out that diversification of boards and staffs alone does not guarantee accountability.

Delegates detailed numerous examples where the unilateral policies, activities and decision-making practices of environmental organizations have had a negative impact on the social, economic and cultural survival of communities of color in the United States and around the world. A particularly telling example is the controversy between Ganados del Valle, a Chicano rural development organization in Los Ojos, New Mexico, and the Nature Conservancy, the self-styled multimillion-dollar “real estate arm of the conservation movement.” The Conservancy purchased 22,000 acres of land in 1975 to preserve biological diversity, ignoring the good land stewardship practiced by traditional communities. Ganados members had used that land for decades to graze sheep for cooperative ventures and preserve an age-old link between culture and land for Chicanos and Native Americans.

Presently the company is trying to locate another huge incinerator in Kettleman City, California (95 percent Latino). And Emelle, Alabama (90 percent Black), is the site of a Chem Waste hazardous waste landfill—the nation’s largest. Summit delegates who are engaged in life and death struggles with Waste Management were hard-pressed to understand why such a corporation is represented on the board of directors of one of the largest and most influential environmental organizations.

Discussions at the leadership summit were not limited solely to reciting a litany of problems. Solutions and processes for developing solutions were an important outcome. For instance, strategy and policy groups convened to create action plans and formulate policy recommendations that would guide future organizing. An international policy group was formed in recognition of the global nature of the environmental crisis and the need for international cooperation to achieve solutions.

It was also decided that the policy recommendations growing out of this session would be presented at the United Nations Conference on Environment and Development (UNCED), scheduled for June 1992 in Brazil. Policy recommendations include statements on the ecological impact of war, underground nuclear testing, the international waste trade, and U.S. foreign aid and trade policies. Statements related to paternalistic and oppressive behavior toward developing countries by some northern environmental organizations were also included.

In addition to the strategy and policy work groups, summit delegates went through the painstaking process of formulating the Principles of Environmental Justice. Final agreement on the preamble and accompanying 17 principles was arrived at by consensus-building. Collectively, delegates surmounted the barriers that have historically divided us—regionalism, culture, gender, language and class. Most important, this victory was achieved in a society that has used racism to pit one group against the other in an attempt to control the whole. By the end of the summit, those gathered spoke with one voice as part of a movement “to eradicate environmental racism and bring into being true social justice and self determination.”

Dana Alston was a member of the planning committee for the People of Color Environmental Leadership Summit. She died in 1999 at the age of 47.