By The Research Committee of Save City College 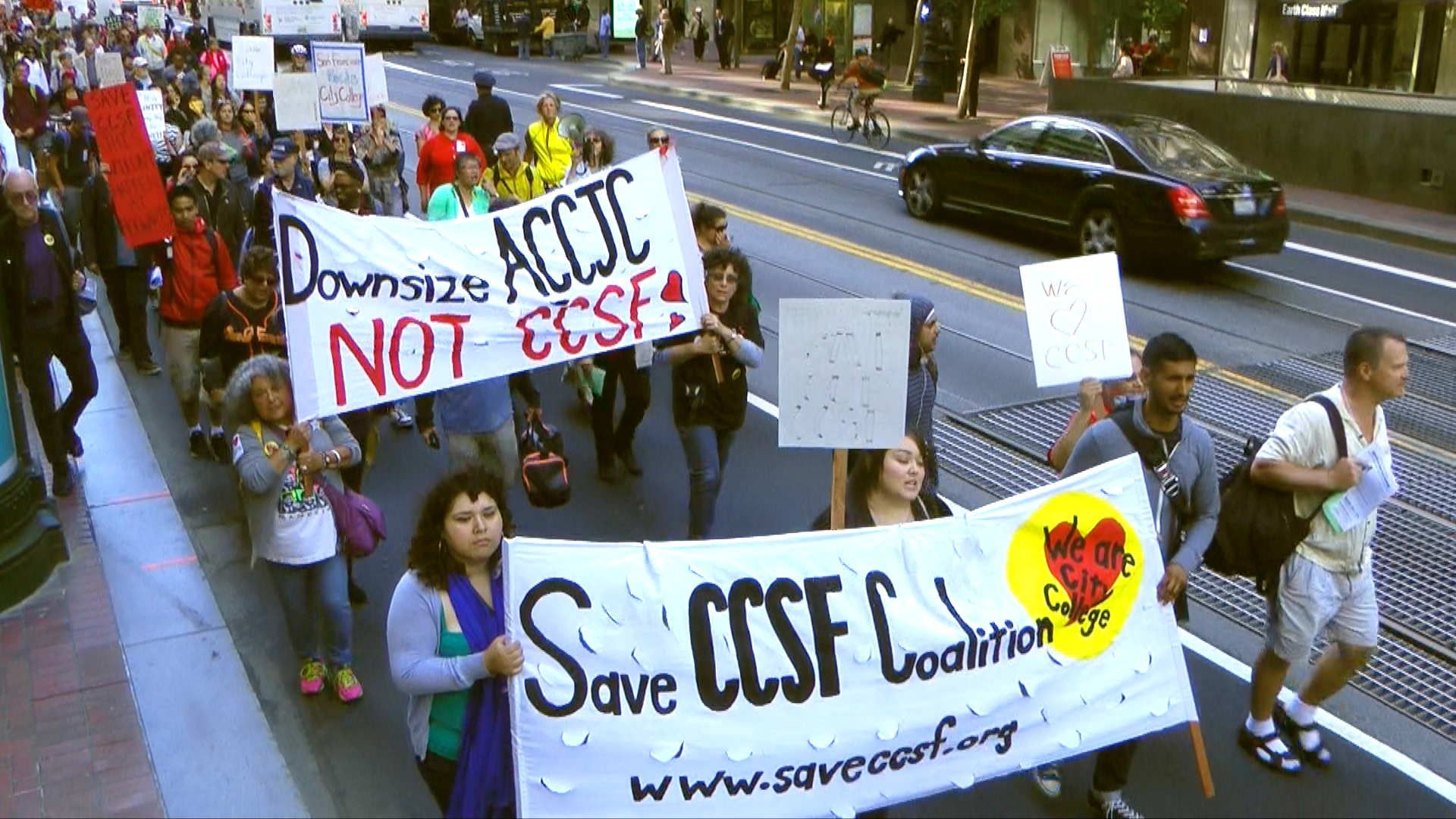 The San Francisco Chronicle became the main sound track for the long-running accreditation crisis that hit City College in 2012, publishing scores of articles that set a narrative frame for the San Francisco public, and for other mainstream media. An analysis of Chronicle messaging can serve as a Rosetta Stone for decoding the corporate interests at play in the attack on this top community college.

Closing the Open Door
Since 2012, state laws and regulations have been undermining the “open door” promise of the California Master Plan of 1960—“access, affordability and quality” for anyone age 18 or over. The rationale for this shift was first laid out in a report produced in 2006 for the California Business Roundtable, the powerhouse lobby for the state’s two-dozen largest multi-national corporations, and its allies. “Keeping California’s Edge: The Growing Demand for Highly Educated Workers” was essentially a work order for the California community colleges and the California State University system, specifying businesses’ workforce needs in great detail.1

The report reflected the corporate view that the purposes of education are “meeting the needs of industry” and “maintaining a competitive edge.” With this frame, educational priorities begin to shift. Training in STEM (Science, Technology, Engineering and Math) is elevated. Broader community-centered offerings get cut, including ethnic studies, women’s and LGBTQ studies, arts, languages and humanities, specialized art classes for people with autism, and beginning English classes for new immigrants.

A 2011 report from the Student Success Task Force convened by the California Community College Board of Governors largely reflected this business agenda. Follow-up state legislation, the “Student Success Act,” passed in 2012 despite vociferous statewide opposition led by City College’s students, chancellor, faculty and trustees. The act puts community colleges under 22 new restrictive regulations. As the new policies come on line one by one, they spell drastically narrower college access, mainly limited to 18- to 24-year-olds enrolled full-time in degree, certificate and transfer programs, geared for the corporate workforce.

These reports shaped the themes of the Chronicle’s coverage of the City College crisis, which would sound eerily familiar to readers who follow news of emergency managers taking over school districts and city governments in Detroit, Flint, New Orleans, Memphis, and Oakland, or news about the epidemics of closures of “failed public schools” in Black and Latino neighborhoods across the country.

Preview Tips the Paper’s Hand
More than a month before the Accrediting Commission for Community and Junior Colleges (ACCJC) issued its “show cause” sanction of City College in July 2012, the Chronicle published a preview article. The headline for that June 1, 2012 story read, “S.F. City College can’t afford all its campuses: Trustees may have to close sites to save money, academic standing.” The article quoted the president of the college’s Board of Trustees saying, “I think we’re going to have to close some. They [the accreditation team] think we have too many campuses.” Nanette Asimov, the main reporter on the City College beat, made no mention of the fact that it was highly unusual for an accreditation agency—charged with assuring educational quality—to suggest that a college recoup its academic standing through campus closures.

The June 1 article set up a percussion line that would echo in scores of follow-up stories: City College was simply too big, “a behemoth,” “a vast college,” “a huge school” “that must shrink to an affordable size”; City College had a deadline to step up from being “a bloated, slow-thinking system of nine campuses into a lean, sharp-minded institution of higher learning.” 2

Several weeks after the July 2012 accreditation bombshell, a consultant with the Fiscal Crisis and Management Assistance Team (FCMAT) issued a report on City College’s financial status, echoing the ACCJC’s narrative about the college’s “profligate finances,” and sparking a new wave of negative news coverage. The Chronicle lent an aura of unassailable legitimacy to both the ACCJC and to FCMAT—“all the experts agree.” A far more critical analysis appeared in Beyond Chron: “Errors, Exaggerations and Bias of the FCMAT Report on CCSF.”3 FCMAT’s official description gives it an air of neutrality. Established by state legislation in 1991, the agency says it exists “to help California’s local educational agencies fulfill their financial and management responsibilities.” But its interventions can be highly political, as in this case; FCMAT also provided the rationale for the 2003 state takeover of the Oakland Unified School District.4

The Chronicle’s coverage unleashed the equivalent of a shock and awe campaign, breathlessly conveying that City College could be closed down by the accreditation commission at any instant, save for the heroic rescue effort now underway by the state takeover. The college had “failed in 14 fiscal and managerial areas.” (October 23, 2012)5 It was near bankruptcy, “so badly managed and fiscally unstable,” “it typically spends more than it has.” (June 29, 2012)6 The Chronicle gave a megaphone to spokespersons who dramatically underscored the need for the swiftest compliance with ACCJC demands: “The clock is ticking,” warned corporate media consultant Larry Kamer, brought in by the state takeover to speak on behalf of the college.7

The newspaper consistently linked management issues to City College’s commitment to open access, bad-mouthing the breadth of the school’s offerings: “Now City College trustees have revised their mission statement, dropping the emphasis on enrichment classes, such as music appreciation, memoir writing and other free classes enjoyed by many older adults.”

This depiction of the college’s adult school program, repeated dozens of times, badly misrepresented the non-credit division that made up 40 percent of the student body.8 While “enrichment classes, music appreciation and memoir writing” conjure up an image of leisured upper class students, in reality City College’s adult school division overwhelmingly serves the most low-income and marginalized residents of San Francisco, at no charge to the students. The largest offering is an exceptionally successful English as a Second Language program. City College ESL had for decades been an essential first stop for new immigrants in this gateway city that is over one third immigrants; the Bay Area still has the highest rate of linguistic isolation9 of any region in California. The college ran a high school equivalency program; offered more than 30 health, safety and nutrition classes for low-income elders at congregate eating sites; tai chi classes for elders in Chinatown; and classes for 2,300 disabled students, including those struggling with autism, PTSD and other psychiatric conditions.

Chronicle of Land Grabs Foretold
With remarkable prescience, the Chronicle’s June 1, 2012 preview story listed campuses that could be closed, among them Castro-Valencia, Civic Center, and Downtown. The article ended with interim chancellor Pamila Fisher saying, “Everything is on the table. [Closures are] a very legitimate question for us to be considering.” Four years later, the Castro and Civic Center Campuses were closed, and the trustees were looking at plans to develop 33 Gough St. for luxury housing on a 75-year lease, over the protests of members of the college community.

In November 2015, the Chronicle reported that the huge 5M (Fifth and Mission) development had been approved by the Planning Commission, despite a nine-hour storm of protest from neighbors and community organizations. City College’s Downtown Campus, serving large numbers of ESL students, is located squarely in the middle of the footprint for the 4.6 million square foot development for luxury housing towers and tech offices. The land for 5M is owned by the Chronicle’s parent company, the Hearst Corporation. City College advocates expect a new wave of articles in the Chronicle, reiterating that the school can no longer afford all its campuses, and that the sale of Downtown Campus (possibly to the Hearst Corporation?) could certainly help rescue the college and restore its academic standing.

Sins of Omission
The stories the Chronicle failed to cover were as important as the errors and distortions in its coverage. For example:

The Chronicle never saw fit to mention that City College’s financial reserves were at a low point during the ACCJC visit because the state of California was a month late in a routine transfer of $25 million in appropriations. Even so, City College’s reserves had never for a moment fallen below the California Community College Chancellor’s Office guideline of five percent.

The system-wide Chancellor’s Scorecard showed that City College had some of the best student outcomes in the state, and the college’s scores surpassed those of every single one of the twelve colleges affiliated with the ACCJC. The Chronicle buried this story in a blog post, turning it into a joke with the lead, “Living well is the best revenge.” (April 23, 2014)10

When the fraudulent for-profit school Corinthian/Heald was finally closed down by the US Department of Education in 2014, in the wake of multiple lawsuits from nine states’ attorneys general, the paper did not touch the story that the ACCJC had fully accredited that school for 30 years. The irony of the ACCJC fully accrediting a for-profit school with a well-documented history of blatant large-scale fraud, while accusing an excellent public college of “fiscal mismanagement,” somehow escaped the Chronicle.

Stories Have Power
The Chronicle’s slant on the City College crisis percolated into the national media, and seemed to become a force in the downsizing of the school. Both the Washington Monthly (September 2013) and the Wall Street Journal (November 2013) ran hit pieces, with the Monthly’s actually titled, “America’s Worst Community Colleges.”

In San Francisco, as early as December 2013, “Many people mistakenly believed that it [City College] is already in the process of closing,” according to a report by Image Research. The report, based on four focus groups, also noted that people trusted information from City College students and workers more than that they received from the media—but that even those trusted sources expressed “negativity and speculation.” Small wonder, when so many Chronicle stories hammer home the paper’s dismal view: “City College is so badly managed and financially unstable, it should shut down if its extensive problems aren’t addressed.” ◼︎

The Research Committee Serving the Movement to Save City College can be reached c/o Allan Fisher, [email protected]

3.    Rick Sterling, “Errors, Exaggerations and Bias in the FCMAT Report on CCSF,” Beyond Chron, July 11, 2013, http://www.beyondchron.org/errors-exaggerations-and-bias-in-the-fcmat-report-on-ccsf/

9.    According to the US Census Bureau, “A household is linguistically isolated if all the adults speak a language other than English, and none speak English ‘very well’. Adult is defined as age 14 or older…” https://www.census.gov/hhes/socdemo/language/data/census/li-final.pdf