"I am taking an arrest to call attention to my demand for community control of housing,” says Nell Myhand. “As Ella Baker said about the courageous young people who sat in at lunch counters in the segregated South during the Civil Rights Movement to challenge unjust law, ‘it’s bigger than a hamburger.’” who went to jail fighting for their homes and for the homes of millions of other victims of the foreclosure crisis.

The arrest came at the end of a month of actions against mortgage giants Fannie Mae and Freddie Mac organized by the Take Back the Peoples’ Bank Campaign, which is fighting for secure and affordable housing for homeowners, tenants, and homeless families while holding W 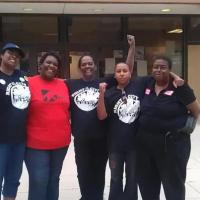 all Street and the government accountable.

As the foreclosure disaster enters its fifth year, housing rights organizers scored some welcome victories in California and are setting their sites on national change.

In September 2012, bowing to multi-city protests, Fannie Mae and Freddie Mac reversed their position on principal reduction and announced that they will begin to allow their borrowers to participate in the taxpayerfunded Keep Your Home California program. In Oakland, the city launched a new foreclosure prevention program in collaboration with community organizations. More than 1,500 impacted residents and supporters protested at the regional (Chicago, Atlanta, New York, and Los Angeles) and national (Washington, D.C.) headquarters of Fannie Mae and Freddie Mac. Between them, the two agencies own over half of all mortgages in the U.S.—7 million of which are currently under water—and hundreds of thousands of vacant foreclosed homes. Among neighborhoods across the Bay Area where the foreclosure crisis continues to wreak havoc, half of all the residential properties in foreclosure in Oakland and San Francisco are controlled by them. Although 80 percent publicly owned, Fannie Mae and Freddie Mac are loyal to Wall Street rather than Main Street and rank first among lenders in kicking people out of their homes. There is now a national campaign led by groups, such as Right to the City, Occupy Our Homes, Home Defenders League, and Alliance for a Just Society, to build a movement to demand that Fannie Mae and Freddie Mac serve the 99 percent rather than the corporate interests that continue to benefit from the evictions and displacement in our communities.

Local Impacts of a National Crisis

Homeowners pushed out of their homes by the banks and investors have been forced into the rental market. Currently, the average rent in Oakland is above $1,800—a 14 percent increase since 2010—and in San Francisco it’s more than $2,700—a nearly 13 percent increase in the same time period. 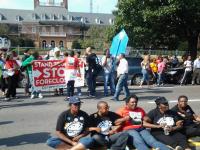 Foreclosures among tenant-occupied properties have also been rising steadily. In their report, “Total Renters Directly Affected by Foreclosure,” Tenants Together, a nonprofit working to advance and defend the rights of renters, claims that more than one million tenants have been directly impacted by foreclosures in California— 175,000 of them in 2011 alone. San Francisco and Oakland—both majority renter cities—have been hit hard with residents at greater risk of homelessness, displacement, and other forms of housing insecurity.

Foreclosure-related evictions have also increased the number of homes that sit vacant, attracting vermin, illegal dumping, and blight, which in turn lead to a rapid deterioration in the health and safety of neighborhoods.

According to a report (“Who Owns Your Neighborhood: The Role of Investors in Post-Foreclosure Oakland”) by the Urban Strategies Council, an Oakland-based support and advocacy nonprofit organization, 42 percent of all foreclosed homes in Oakland have been purchased by private, out-of-town investors. Ninety-three percent of those properties are located in the flatland neighborhoods. The foreclosure crisis apparently has generated another wave of real estate speculation that has benefitted investors at the expense of local homeowners and tenants. In every case, homes are being sold at prices far below what is owed on the loans. But rather than help the people who already live in these homes refinance their loans, the banks are choosing to sell the properties to investors, often leaving the families with nowhere to go.

Local Support for Communities Fighting Back

Causa Justa::Just Cause (CJJC), a grassroots organization fighting for racial and housing justice for lowincome residents of Oakland and San Francisco, is pushing for the resurgence of a national housing movement to address the root causes of the current crisis, while simultaneously working to develop local strategies to help tenants and homeowners fighting to stay in their homes.

When the foreclosure crisis started in 2007, CJJC and several local organizations demanding accountability from banks for their role in creating and sustaining the problem decided to take on Wells Fargo Bank, one of the major culprits. The movement began as a regional coalition staging protests at the bank’s Annual Shareholder Meetings but quickly matured into a local force advocating for people to remain in their homes. Now Oakland is gearing up to implement the “Oakland Comprehensive Foreclosure Prevention Plan”1 encompassing local adaptations of policy wins from the Homeowner Bill of Rights—including a law authored by Democratic Assemblyman Tom Ammiano of San Francisco (and sponsored by Tenants Together) barring unfair evictions when new owners of rental property fail to communicate with the tenants—and the Attorney General’s Settlement. Also included are increased legal and counseling services for homeowners an extensive outreach program targeting over 3,000 Oakland families in foreclosure; and an innovative program (ROOT) for buying homes in danger of foreclosure to negotiate affordable mortgages for struggling borrowers.

On Every Block, In Every Barrio, Organize!

Although the results of the efforts so far have been inspiring, the foreclosure crisis is far from over and our communities are still struggling for true housing security, community health, and well being. The effective solutions that our communities need require a commitment to sustained collaboration and coordination between housing advocates and impacted residents. We have to organize neighborhoods and bring in as many allies as possible into our coalitions to sustain the fight to keep as many families in their homes as possible. n