Cleveland rocks!” is the theme song of the long-running Drew Carey TV show. But not all neighborhoods rock equally, at least when it comes to jobs and economic opportunity.

Cleveland—once put down as “the mistake on the lake”—has undergone a dramatic revival in its downtown business district over the past 15 years with popular attractions, such as the Rock and Roll Hall of Fame, the East 4th Street food and entertainment section, and new stadiums and arena for professional sports teams. University Circle—the city’s cultural center—has a vibrant core of health, cultural, and educational institutions, as well as some major international businesses that employ tens of thousands of people in good-paying jobs.

In sharp contrast are the poor areas which have not shared in the revival. These neighborhoods, where vacant lots, deteriorated buildings, water shut-offs, and foreclosure signs are common, are home to about 43,000 people and an unemployment rate close to 40 percent. The median annual income is less than $18,500.

“University Circle has been radically disconnected from the poor neighborhoods surrounding it,” Ted Howard, director of the Democracy Collaborative, told attendees at the 2010 ACE (Association of Cooperative Educators) Institute in Cleveland last summer. “So... how do we break down this barrier and create opportunity for the people of the surrounding neighborhoods?”

Many of the worker-owners of the coops have had to overcome incarceration records and substance abuse and have struggled to find decent jobs in the past. To them, merely finding a steady job in their depressed neighborhoods is an accomplishment, let alone one that helps them build equity. Next year, the Green City Growers Cooperative plans to break ground on one of the nation’s largest urban food production greenhouses. Another coop venture is The Neighborhood Voice, a free student-operated online and print monthly targeted towards those who live and work in the greater University Circle area.

Ultimately, the hope is that there will be dozens of worker-owned coops operating under the Evergreen umbrella, transforming and lifting Cleveland’s economy in much the same way as the worker-owned cooperatives of northern Spain’s Mondragon region, according to James Anderson of the Ohio Employee Ownership Center (OEOC), which helped spearhead the launch of the Evergreen project. Mondragon began with one coop and a handful of jobs 50 years ago but is a large and diverse network providing more than 100,000 good jobs today.

Novel Ways to Break Cycle of Poverty
In December 2006, the Democracy Collaborative at the University of Maryland—a research and policy center focused on community wealth-building strategies—held a roundtable in Cleveland to explore innovative ways to break the cycle of poverty in the greater University Circle area. Participants included faculty members, community development experts, leaders of Employee Stock Ownership Plans, chamber of commerce leaders, and a hospital CEO, among others.

“We were lucky to have the Ohio Employee Ownership Center just down the road and access to low-cost capital,” said Howard, of the Democracy Collaborative. “Lack of capital is the biggest restraint on the spread of the coop movement.” He recalled a conversation with the leader of an economic Empowerment Zone created earlier to direct more financial resources to the greater University Circle area. Despite the expenditure of some $34 million under that effort, “there was virtually nothing left behind afterward. It did not make a difference.”

The consensus was to try and attack the problem with a business development strategy and create for-profit businesses owned by workers from the community and the institutions that are their customers. These worker-owned businesses would pay living wages and offer an opportunity for wealth-building through equity accumulation in the businesses.

“We wanted to root capital in the community so that it would not get up and leave,” said Howard. “Worker-owners of a business are not going to offshore their own jobs.”

To help refine the strategy, 120 people—mostly leaders of large institutions and businesses of the University Circle area—identified as the primary customers of the new coops were interviewed over the ensuing six months. When it was determined that there was a huge economic opportunity to source business locally, Evergreen was formed. 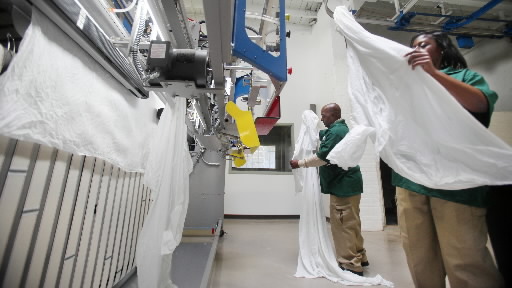 Key Strategies: Locally Focused and Green
When looking to organize and launch the first Evergreen business, Howard recalled the late John Logue, founder of the OEOC, saying: “This project cannot be allowed to fail, so we must have Jim Anderson (who formerly led the Republic Storage system in Canton, OH) on board.” It was a tribute to the business acumen and organizational savvy Anderson displayed during his long professional career with employee-owned firms.

Anderson served as CEO of the Evergreen Cooperative Laundry during its first year before turning over leadership to a team of coop members in keeping with the coop’s goal of providing a career ladder to senior management for employees.

From the start, Evergreen focused on tapping the large “anchor institutions” at University Circle, which purchased goods and services worth about $3 billion annually—virtually none of them locally.

A parallel focus was to launch “green” businesses that operate in an environmentally benign manner. The Evergreen Cooperative Laundry, Anderson claims, “is the greenest laundry in northeast Ohio, probably in the entire state.” Heat and water used in the operation is recycled, harsh chemicals are kept to a minimum, and the operation is housed in a LEED (Leadership in Energy and Environmental Design) silver building—an internationally recognized “green building” certification system.

Nitty-Gritty of Funding a Coop
The Evergreen Cooperative Development Fund was created as the financing entity for the entire family of coops under the Evergreen name. The first $750,000 raised came in the form of a long-term, low-interest (1 percent) loan from the Cleveland Foundation. That money was used to leverage the rest of the $5.7 million—including a $1.5 million loan from the city of Cleveland’s Housing and Urban Development 108 funds—that it cost to launch the laundry coop. The initial funding also helped Evergreen raise funds from two commercial banks and qualify for a $250,000 loan from the Commonwealth Revolving Loan Fund, established by the OEOC at Kent State University.

The initial business plan calls for the coop to break even within 18 months and beyond that, to grow the fund to about $50 million. A corporate entity—Evergreen Business Services—supplies “back office” services to all the coops in addition to housing the CEOs and offices of human resources and finance.

A Desperate Need for Good Jobs
As opening day approached, the desperate need for good jobs in the area was underscored by the roughly 500 applications received for the first dozen openings at the laundry.

“We pay a significantly higher wage,” noted Medrick Addison, a worker-supervisor at the laundry and one of the first two hires. New employees have to go through a six-month trial, at the end of which existing coop members vote on whether to accept them.

“You have to prove yourself to your fellow workers because you are essentially choosing to go into business with them,” Addison pointed out. A worker who becomes a coop member qualifies for a $2-an-hour bonus and benefits, such as Evergreen’s no-cost health package.

Many people in the area have been through various job-training programs in the past, only to find there were no jobs for them when they complete the training. Although training is still part of the picture at the laundry, it is much more than simply how to do the work and most importantly, offers a good job from day one.

Worker training provided by the OEOC begins with personal financial literacy classes, followed by basic worker coop issues—such as, knowing when to wear a owner hat vs. a worker hat—and business financial literacy. In all, training lasts about a year, with classes held every other week.

The laundry currently employs about 25 but future plans call for 50 coop members by the time the laundry reaches a “mature” level of operation—cleaning 10 million pounds of laundry annually.

When the business becomes profitable, 10 percent of profits will go back to the Evergreen Development Fund to help start other coops. Of the balance, 80 percent is distributed among the members, of which 20 percent has to be paid in cash.

Members have to invest $3,000 for a share of co-op ownership, which they can pay off at a rate of 50 cents per hour deducted from their pay increase. As the company earns profits, earnings will be placed annually in worker capital accounts with the goal of generating up to $65,000 in coop equity for each worker who stays on the job for eight years. Workers receive the money when they leave the company or retire.

“We want to keep the money circulating locally… to stop it leaking out of northeast Ohio,” says Anderson. To this end, they are constantly developing new business ideas for worker coops, including refurbishing neighborhood houses, recycling, and turning hospital medical waste into energy.

Customer Satisfaction Key to Coop Success
The future of the coop rests as much with its customers—especially the large healthcare institutions that account for most of its business—as it does with the worker-owners. So, Addison personally addresses any complaint that touches on quality control.
Additionally, one seat on the coop laundry’s board of directors is reserved for a customer. The rest of the board is made up of two coop members and two appointees of the Evergreen Cooperative Corporation, the coop network’s “holding company.” No lenders sit on the board and the bylaws have been set up to ensure that the coop is never demutualized.

Ultimately, the success of worker coops depends upon building a culture of ownership, points out Howard and underscores the point with the following story: A member of a group touring the Evergreen laundry recently—one of two union representatives from a laundry in Pittsburgh—remarked how superior it was to the laundry that they worked for, to which, an Evergreen coop member responded: “That’s the difference; we don’t work ‘for’ this business, we own it and we work for ourselves.”

Dan Campbell is the editor of Rural Cooperatives, the United States Department of Agriculture’s Rural Development bimonthly magazine from which this article is adapted.