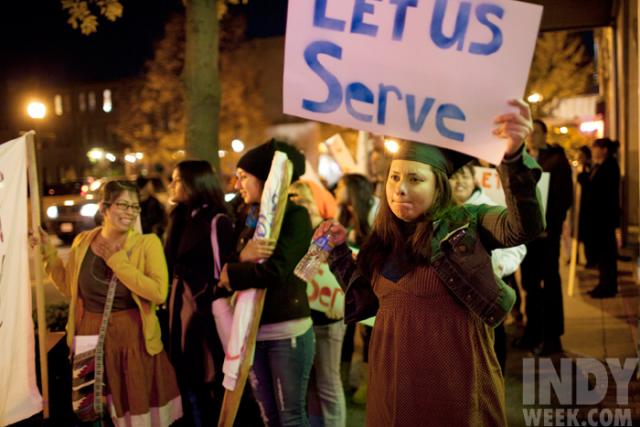 Christine Joy Ferrer: What was it like growing up as a young, undocumented Latina in the South and how has your identity influenced your work?
Viridiana Martinez: If you look at the undocumented youth movements, most of the founders and cofounders are women. A lot of us are getting older; we’ve had to grow up so much more quickly than some of our more advantaged peers. I’m not in California. I’m not in Miami. I’m not in New York or Texas. I’m in North Carolina. Reality in the South is a lot different than any of these places. There is no Chicano movement. Many of us are the first generation of Mexican and Latin American immigrants. The history of this region is the struggle existing. We’re the pioneers in terms of immigration work, immigrant rights, and activism. The challenges we face can be seen in either of two ways. One, this is so challenging, I’m not going to do it and I don’t want to get involved, or two, this is challenging, this is risky, and this is crazy but I need to do it. We need this open mind; this uninhibited creativity to seek different opportunities in spite of obstacles. Let’s find opportunity in these tragedies to organize and to expose our reality.
I have the privilege of being a fair-skinned Latina, and I’m fluent in English, so I don’t get profiled as much or as often as other people do. It’s different being a fair-skinned Latina fluent in English in the South compared to a farm worker who’s not fluent in English and not fair-skinned. Being aware of my own privilege I think is very important in doing this work.

I got pulled over a month or so ago for speeding. My license expired last year. The cop came to my window and gave me the ticket and said, “You know why I pulled you over—for speeding. And I’m also giving you a ticket for driving with an expired license. You know it’s been expired since last July, right? Why haven’t you gotten it renewed?”

And I said, “Because I can’t, I’m undocumented.”

I’m at a point where I’m like, why the hell do I need to hide this reality? This is what I’m living. But this consciousness isn’t the same situation for all immigrants. Many are still living with this internalized pressure.

Deportations are happening every single day through programs like 287G and Secure Communities. Supposedly, it’s to find criminals but our people are getting racially profiled. In the South, you have these like hick cops that are pulling over our folks everyday. They position themselves strategically near mobile homes and trailer parks or in neighborhoods that are predominately immigrant. They do so to target our people. I get three to five calls at least every two weeks, or emails saying: “My son is getting deported. My daughter got pulled over. What do we do?” 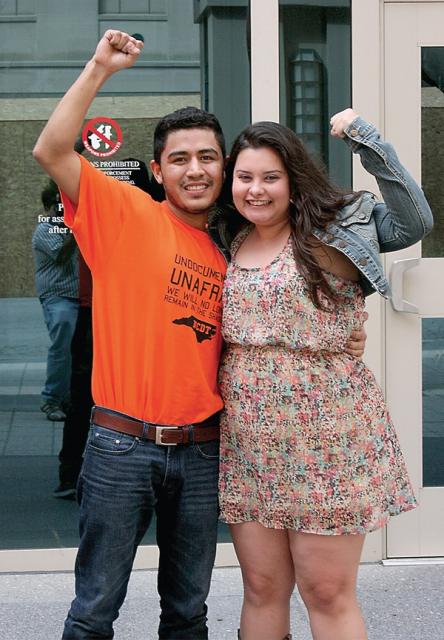 Ferrer: What did the release of Uriel Aldesto, an undocumented youth, mean for the immigrant community, activists, and others who have been mobilizing against deportations, institutionalized discrimination and the exploitation of their communities?
Martinez: This was a major victory in the fight against deportations. It proves that a community standing behind a person can move mountains. But it also exposed the structural racism and discrimination within our communities. It was also a reflection of our reality. Aldesto has a criminal background. Most of our youth are not valedictorians. They are not the cream of the crop necessarily in terms of what Anglo schools want to define as the cream of the crop. They don’t have the perfect, squeaky-clean profiles. We grow up facing some real life challenges and some of us are lucky to have both of our parents healthy, working and loving each other. We must continue to organize the community, get youth to understand the importance of coming out as undocumented, and educate people. Sometimes a family doesn’t realize the seriousness of the situation until one of their own is put in deportation proceedings or picked up for driving without a license or for something that simple.

Our youth who are graduating from high school feel absolutely hopeless. This is very real, the pain, the anger, the confusion, and lack of hope, because you don’t see the light at the end of the tunnel. There are cases where some have committed suicide. One of our biggest focuses right now is on the mental health of undocumented immigrants. We’re hearing more and more stories of undocumented youth and adults living with mental health issues. Whether it’s depression, anxiety, attempted suicide, or that we’re hurting ourselves. Sometimes the help you need, to just hear that you’re not alone, or to vent with somebody, requires the understanding from those who are in the same boat.

We need to take the leadership as undocumented youth and organize. We need to create spaces, whether it’s at youth empowerment summits, rallies or town hall meetings, where youth can get together. We must take the time to develop relationships, by creating a safe space where more undocumented youth can open up about their lives, about the abuse, the trauma, that they have lived to get on the path to liberation—a space where they are not afraid or ashamed. Where they are understood more than anything.

And having allies that are conscientious, who admit, “I am never going to know what it’s like to be in your position because I have papers, but want to help.” These are the people that we need beside us, behind us, so that we can be in the forefront and feel supported. And if we fall, somebody’s going to catch us as we fight for this. All this, in consequence, leads to lobbying efforts, rallies, and protests, where youth are no longer afraid to hold a blow horn and speak out.

Christine Joy Ferrer is the web and publishing assistant for Urban Habitat and the creator of eyesopenedblog.com, dedicated to all artists of color committed to social justice. For more information on the North Carolina Dream Team, visit: ncdreamteam.org.

END_OF_DOCUMENT_TOKEN_TO_BE_REPLACED
History of Exploitation: from Slavery to Domestic Work