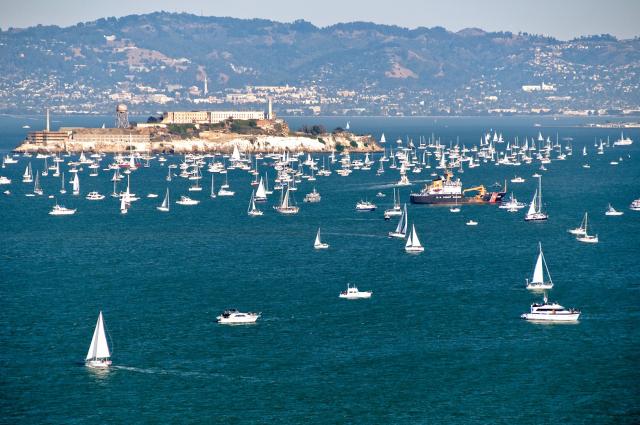 In late 2010, San Francisco was abuzz with the prospect of being selected to host the 2013 America’s Cup sailing race. Like other cities seeking to emerge from the current recession, San Francisco has been eager to attract business and economic investments. Moreover, local billionaire Larry Ellison’s team had won the previous race, giving him the right to select the location for the next one. But San Francisco’s America’s Cup experience has been emblematic of the fact that equitable distribution of economic benefits is not automatic. It is up to community advocates to push policies that ensure equity.

As is typical with any “public-private partnership project,” jobs were at the center of the America’s Cup discussion. Supporters projected a $1.2 billion infusion of cash into the local economy that would create more than 8,000 jobs. Meanwhille, community advocates had spent the summer and fall of 2010, working with Supervisor John Avalos and  building trade unions to develop a landmark mandatory local hiring policy.
Jobs Policy Brings Promise for Rhode Island Jobs
Community and labor leaders around the country are coming together to work with cities to increase local employment opportunities on taxpayer-funded investments. Last week, the Providence City Council approved revisions to its local hiring policy—crafted by community groups, such as Direct Access for Rights and Equality (DARE) and the Rhode Island Building and Construction Trades Council, the training organization Building Futures, and high-road job advocates Build Rhode Island. Co-sponsored by Mayor Angel Taveras, this important initiative comes at a time when the city’s unemployment rate is over 13 percent.
Although happy about the policy, DARE Executive Director Fred Ordoñez acknowledges that based on past experience, the bigger challenge is in the implementation and enforcement. "We are hopeful that with a new administration, local allies, and allies around the country like Brightline, we will be able to hold officials and businesses accountable to hiring those who need employment the most," he says.
Rhode Island Building Trades Council Secretary and Treasurer Scott Duhamel, who is also the treasurer of Rhode Island Jobs with Justice, notes that the policy is a direct result of a stringent but collaborative dialogue among community, labor, and city administration. "If enforced, this will truly be a policy that helps enact substantive positive change,” he says. —JA

Community advocates and policy makers suggested that America’s Cup job guarantees for local communities would help align the event with economic expectations of inclusion and expand interest in it beyond traditional yachting enthusiasts. In a Host and Venue Agreement signed on December 14, 2010, the

Oracle-led America’s Cup Event Authority LLC voluntarily agreed to comply with San Francisco’s recently approved local hiring policy on $55 million worth of construction required to prepare the city’s waterfront. In return, the Event Authority received long-term rights to develop this waterfront property after the event. The Agreement was signed by Mayor Gavin Newsom and unanimously approved by the Board of Supervisors.

The following summer, however, when the local hiring coalition entered into discussions with event organizers about a strategy for non-construction jobs, such as vending and on-site recycling, they realized that not only did the Event Authority’s draft workforce plan seek to introduce a “good faith” element to soften the mandatory local hiring policy, it showed a lack of commitment to engaging an all-union workforce on permanent and temporary construction, such as event staging and spectator seating.
Revive Oakland Wins Jobs Policy on Army Base Conversion
On February 7, 2012, the Oakland City Council unanimously approved a good jobs and community benefits framework that will guide the redevelopment of the massive Oakland Army Base project.
The Council’s vote followed a well-attended public hearing featuring a powerful line-up of advocates, workers, youth, and neighbors and was a major step towards victory for the Revive Oakland coalition. Convened by EBASE, Revive Oakland has been waging a multiyear campaign for a comprehensive job creation policy through local hire, with the goal of lifting communities impacted by the redevelopment. Next, community groups, labor unions, the city, and developers will negotiate a detailed Community Jobs Agreement and Project Labor Agreement.
Coalition-Endorsed Framework Guides Negotiations
A diverse coalition of stakeholders convened by Oakland Councilmember Jane Brunner developed consensus around a community benefits framework that will guide the negotiations in this groundbreaking opportunity to leverage public dollars to create skilled jobs for those often stuck in temporary low-wage jobs.
A staggering 80 percent of Oakland voters want the project to ensure workers' rights to organize and to provide opportunities for previously incarcerated individuals, according to Jessamyn Sabbag of Oakland Rising.
“We are hopeful that we will reach agreements that deliver on the long-held promise of good jobs—for those often locked out of the economy—from this major redevelopment of publicly-owned land,” said Kate O’Hara, Revive Oakland’s campaign director.
Ambitious Goals Promise New Opportunity
The policy framework lays out a 50 percent local hire goal for construction and long-term warehouse operations jobs and calls for a share of the work each year to be set aside for new apprentices who have to be from Oakland. The local hire goal, which begins with West Oakland and extends to other low-income neighborhoods, marks the first time that Oakland has set local hire expectations for jobs beyond the construction phase.
The framework also includes the development of a West Oakland Jobs Center—ensuring long-term job pathways and training programs—and expects operations employers to pay living wages and hire workers directly, not through temporary staffing agencies, which can reduce job quality and stability.

Visit workingeastbay.org/reviveoakland for more information about EBASE and Revive Oakland.

Local hiring success in San Francisco has always depended upon a unique partnership between community advocates and progressive building trade unions—a powerful alliance that was reignited by the America’s Cup workforce plan. Last September, Supervisor Avalos called a hearing to highlight the need to apply local hiring and prevailing wage protections to the America’s Cup jobs plan and the need to ensure that the wages and benefits secured by organized labor are not undermined.

Fundamental to this discussion is the idea that cities are not made to compete against one another for business. So, local hiring advocates maintained a dialog with community and labor leaders in Rhode Island, a potential alternative host site, to ensure solidarity with respect to prevailing wage and local hiring commitments. (See sidebar “Jobs Policy Brings Promise for Rhode Island Jobs.”) Any willingness to depart from these important safeguards to attract business only leads to a race to the bottom, especially for blue collar workers.
San Francisco’s Local Hire Works!
Prior to the December 2010 adoption of the local hiring legislation crafted by Supervisor Avalos and a coalition of community and labor advocates, only 20 percent of local residents got hired on taxpayer-funded construction on average. A year after the law went into effect on March 25, 2011, resident participation on the same projects has jumped to 34 percent—a 70 percent increase over previous "good faith" levels. In addition, the new policy has increased racial and gender diversity on public works projects.
Preliminary data on 22 active public works projects that got underway in the latter part of 2011 shows that 34 percent of craft hours and 68 percent of apprentice hours have been performed by San Francisco residents. Women performed less than one percent of all the craft hours, with San Francisco women performing about 1.8 percent of all craft hours by residents. As most of these projects are still in progress, the data only indicates the preliminary impact of the policy, rather than definitive results.

The jobs discussion came to a head at a City Hall hearing in January 2012, when dozens of community advocates, labor leaders and workers delivered a consistent message about the importance of embracing the city’s local hiring and prevailing wage protections for all work associated with the event and long-term development of the waterfront.

On February 27, Mayor Ed Lee and event organizers announced that the long-term development aspect was to be replaced by a scaled-back city-funded investment in shoring up San Francisco’s piers—to shift the focus of the discussion back to excitement around the race and the projected participation of hundreds of thousands of spectators.

However, community pressure and the support of key elected officials has ensured that local hiring and prevailing wages will apply to all aspects of America’s Cup construction—from temporary bleachers and tents to the America’s Cup Village—and that apprentices will be drawn from state-certified joint apprenticeship programs. The Board of Supervisors unanimously approved the scaled-back proposal on March 27.
One key lesson of the America’s Cup experience is this: advancing job equity in an environment where cities compete to attract economic investment requires both strategic policy development and partnerships with key stakeholders. San Francisco benefitted from the hard work that led to the creation of a local hiring policy that covers public works construction, which private companies can opt to comply with. Even so, securing that commitment would not have been possible without support from the city’s progressive building trade unions and community advocates.
The Event Authority’s decision to quickly embrace job equity ensured the support of an important group of stakeholders for the modified proposal with little impact on the deal’s bottom line. And San Francisco advocates have been able to send a clear signal that the Bay Area is a place to do business and host high-profile events—without compromising the values of job equity and sustainable working conditions. 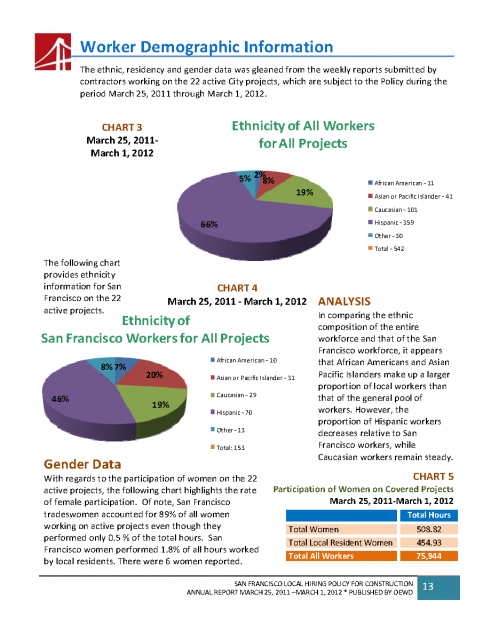