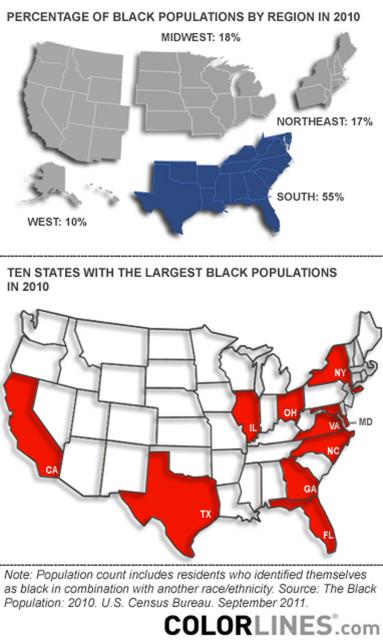 The U.S. Census Bureau released findings from the 2010 Census this month that reveal a dramatic migration underway within black America. Over the past decade, hundreds of thousands of black people have relocated to the South and around the country, have moved from the cities to the suburbs.

Much of this growth is due to black migration to the South from other regions of the country, according to the Brookings Institute. The numbers are clear: black people have been gradually migrating below the Mason-Dixon Line.

They are also moving from inner cities to suburbs. The proportion of the black population living in the biggest city of a given metropolitan area decreased in all 20 of the nation’s largest metro areas in the past decade.

For example, the percentage of the Detroit area’s black residents living in the city of Detroit itself dropped by 16 percent. Other major cities home to large black populations, including New York, Chicago, Los Angeles, Washington, DC, and Oakland, have all experienced large black population losses as well, as residents have left these places for suburbs or the South—or both. Notably, Southern metro areas top the list for national gains in suburban black residents.

The movers—like migrants worldwide—also tend to be strivers. A few studies have found that among them is a sizable cohort of first-time Southern dwellers who tend to be younger, wealthier, and more educated than the larger black population.

So what do these striking trends mean for black communities, both those that are growing and those that are shrinking? Patterns of residence and migration are shaped by many complicated factors. There are institutional forces, like housing and labor markets, government incentives, and neighborhood characteristics. And there are individual and interpersonal factors, like age, education, and family relationships. But there are also important consequences. Where one lives can affect access to housing, employment, social services—and to the basic structure of a community that so many families depend upon to survive and combat hard times like the ones in which, we now live.

Southern Discomfort
For decades, major cities in the Northeast, Midwest, and West have suffered from de-industrialization and the associated job loss, residential segregation, infrastructure decay, and cost-of-living increases. The impact of these changes have been especially strong in black communities. Before the 2008 recession even began, the black populations of many big Midwestern cities had double-digit unemployment. “Folks are moving here for the lower cost of living,” says Sendolo Diaminah, who recently moved from New York to North Carolina and founded the community organization, People’s Durham. “Some had family who were here. There are tons from New York. Some wanted to get their kids out of a situation of violence and drugs.”

But families fleeing the economic collapse in Rust Belt and Northeastern cities have likely found similar troubles in the South, which has suffered some of the hardest blows in the current downturn. The South used to outpace the nation in economic performance, due to in-migration and development. That trend has ceased. And while the South may have entered the recession with low unemployment rates, those rates have since risen dramatically, exceeding even some of struggling post-industrial cities in the Northeast and Midwest. Black unemployment in Atlanta hit nearly 16 percent in 2010—twice the rate of 2007.

On top of the job loss, suburban metropolitan areas in the South, like Atlanta, Miami, and Houston have high rates of job sprawl, in which jobs are neither centrally located nor equally distributed throughout the metro area. That makes job opportunities harder to find and jobs more difficult to manage once found. In fact, suburban poverty rates find their peak in Southern metro areas. And once-enticing housing markets have been damaged by high rates of foreclosure, which disproportionately affects blacks in Georgia and Florida (though other Southern states with large black populations, including Texas and North Carolina, have not been as severely affected).

The same dynamic is playing out in many suburbs. Desires for better employment opportunities, affordable housing, safer neighborhoods, and better schools are surely drawing many black families to the suburbs. But the trend of relocating to the suburbs may not always be driven by choice. Gentrification is likely pricing black families out of their homes in places like San Francisco, Oakland, and Washington, DC, cities that have seen significant black population loss paired with an influx of whites. Meanwhile, poverty is rapidly expanding in suburban communities and black population rates have grown fastest in lower-income suburbs, according to the Brookings Institute.

Furthermore, blacks are less likely than whites to live in suburbs with high job availability and suburban social service organizations often lack the capacity and funds to address increasing need. Many suburban governments have also been unwilling to accommodate new lower-income residents, reluctant to build multi-unit housing, and opposed to the construction of shelters and social service centers. It is difficult to say that the suburban dream is being fulfilled for black America, especially when predatory lending and foreclosure rates continue to disproportionately impact black families and the nauseating wealth gap between blacks and whites further deepens. 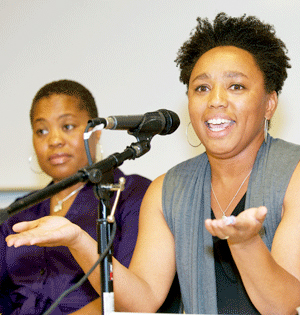 The Cities Left Behind
Inner city neighborhoods that have lost black residents also face new challenges as a result of this migration. In cities across the country, community schools have been shuttered as the number of school-aged children has dropped. Inner cities, which still have high levels of need, can expect fewer federal funds as Census results inform the distribution of money for community development, utility assistance, Head Start programs, and senior housing.

The increased dispersal of black families across municipal boundaries may also impact the election of politicians most willing to address the unique concerns of black constituents. Black concentration in major cities allowed for the election of black mayors, city council members, and congressional representatives in the 1970s, 80s, and 90s. With the black population spreading beyond central city neighborhoods, will black voting power be weakened? This is of specific concern now as states are redistributing and redrawing political districts based on the Census.

Connections to family, friends, and organizations in old neighborhoods will likely change as well. Will congregations shrink? How will personal relationships be maintained or strained?

N’Tanya Lee, a former director of Coleman Advocates for Children and Youth, a grassroots organizing and policy advocacy organization in San Francisco, reflects on how housing stability and relationships stretched from city to suburb are impacting San Francisco Bay Area families. “A black high school student goes to school in San Francisco, stays with an auntie, but their mom lives with her boyfriend in Richmond and grandma lives in Hayward. She kind of lives here; kind of doesn’t,” Lee says, painting a hypothetical picture of the instability. “What’s the anchor? Where’s the ‘home’ to organize around? Parents move to Sacramento and kids still go to school, crash with friends, or live with grandparents. Families are constantly traveling by BART and highways to visit core members of their families, who are spread out.”

As Lee suggests, with more black families spread across the metropolitan landscape, the strategies of progressive and grassroots organizers must adapt, too. How will organizing efforts arise from growing black communities themselves, as residents strive to add their voices to communities that may be experiencing racial diversity for the first time? Looking closely at the causes and consequences of black migration to the South and the suburbs, we can see there are new challenges to building power to make fundamental change.

Despite these challenges, it is important to remember that the growth of strong Southern black communities and the loosening of urban segregation are exciting events. Black America has responded to migrations that were both larger and more culturally significant than those we see today with adaptation and redefinition and renewed vitality.

The Applied Research Center is exploring black population shifts with an intent to serve organizing efforts and also reflect them. We are following and supporting a number of community organizations to learn more about movers and their communities and also to capture the trends and strategies they will use to organize in the midst of these population shifts. By looking up from Census reports and directly engaging community organizations, researchers can better compile, tailor, and disseminate clear and persuasive pictures of population change to support fights for powerful communities.

John Sullivan is a research associate at the Applied Research Center, which publishes Colorlines (www.colorlines.com), where this article was first published.