Farmworkers—The Basis and Bottom of the Food Chain 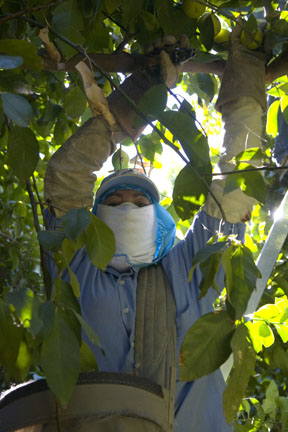 By Laura-Anne Minkoff-Zern and Christy Getz

Events in recent years have triggered a reawakening across the United States of a movement that acknowledges the importance of worker rights and of protecting the livelihoods of this country’s working class. Historically, however, one group of workers has routinely been excluded from the gains made by the larger labor movement, i.e. farmworkers—the people who weed, pick, harvest, and pack, often in 100 degree weather, while routinely being exposed to hazardous chemicals.

Approximately 700,000 farmworkers reside in California at any given time. Farm employment is unstable and the average farmworker is employed for only seven months of the year (nine months in California). For female workers the employment season is even shorter. Jobs are scarce, even during high season. In California, about 350,000 jobs are available from April to October and 275,000 from November to March. Historically, migrant workers returned home during the winter months. However, with the increased militarization of the border, this practice has become harder and many migrants remain in the U.S. out of fear even in the rainy season when they have little or no income. And although a majority of farmworkers are male, women and children are increasingly crossing the border and entering the workforce, as men can no longer maintain a seasonal migration.

Sixty-eight percent of migrant farmworkers come from four Mexican states: Michoacan, Jalisco, Guanajuato, and Oaxaca. An estimated 120,000 of them are indigenous Mexicans, who usually enter at the bottom of the labor market and often suffer discrimination on both sides of the border.[1]

Hunger and Death in the Midst of Plenty
Ironically, those who labor to produce the food for the nation do not earn enough to properly feed themselves. A study conducted by the California Institute of Rural Studies (CIRS) in Fresno County in November 2007, found that 43 percent of farmworkers were food insecure: 50 percent said they could not afford to buy as much food as they needed, and 48 percent could not afford to eat nutritious meals. Recently, a food bank in the agricultural region of Santa Cruz County reported that about 70 percent of its clients were farmworkers. 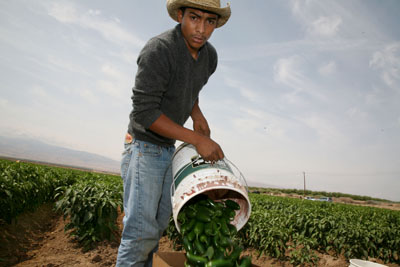 Federal laws have done little for the plight of farmworkers, who have been excluded from nearly all of the major labor laws passed since the 1930s. Some, like the Fair Labor Standards Act (FLSA), have been amended to include workers on large farms, but the National Labor Relations Act (NLRA) of 1935, which protects workers’ right to act collectively and form unions, excludes farmworkers.

State-level regulations on labor, health and safety, and pesticide use are often ignored by farm managers and infrequently enforced by state agencies. Where an estimated 60 to 90 percent of farmworkers are undocumented, growers and labor contractors can use the workers’ status as a shield against complaints. Even when laws are broken with deadly consequences, violators are barely reprimanded. Such was the case with 17-year-old Maria Isabel Vasquez Jimenez, a pregnant vineyard worker, who collapsed after working nine hours in the fields with no access to shade or water in extreme Central Valley heat. To avoid charges to the company, her supervisors had the family take her to a local clinic that was not equipped to treat her and she died two days later. The two owners of the labor contracting company received probation, community service, and a combined fine of $1,730.

Organic Does not Mean Fair
It is generally assumed that organic growers treat workers more fairly and that worker rights are an inherent part of sustainable farming. But although organic farm workers are not exposed to dangerous synthetic pesticides, labor standards on organic farms are largely in line with those on conventional farms. 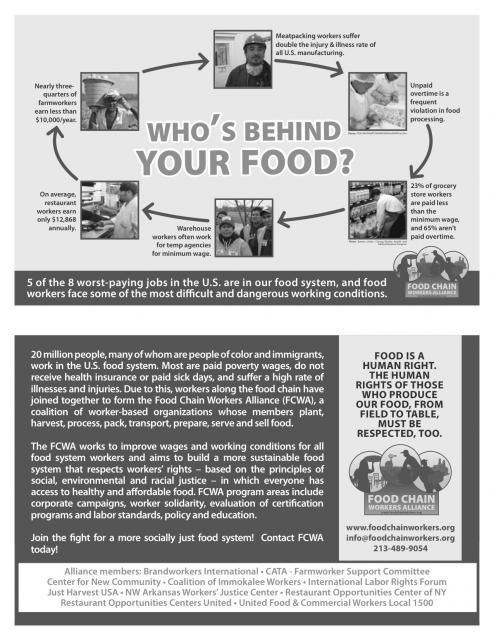 In this respect, organic farmers join most other growers and agricultural industry boosters who use the discourse of agricultural exceptionalism, which is the idea that the agricultural sector is culturally different and deserves to be exempt from the labor standards of other industries. Agricultural exceptionalism, which favors farmers at the expense of farmworkers, has historically guided national and state policy. The ideology also pervades the organic and sustainable agriculture movements, which tend to conceptualize social justice as justice for farmers, not farmworkers.

The lack of an adequate regulatory framework to protect agricultural workers positions farm labor as the most dangerous and underpaid occupation in the nation. The wages, which are among the lowest for any employment, actually decreased 20-25 percent between 1975 and 1995 and continue to fall. Currently, the median income for a single farmworker is between $10,000 and $12,499, and for a family supported by farm work, it is between $12,500 and $15,000. These statistics situate farmworkers squarely in poverty and are also reflected in their lack of access to health care and affordable housing, their unsafe and debilitating working conditions, and high rates of chronic disease.

Some Triumphs Among Adversity
The struggle of farmworkers in California is not entirely without its triumphs and the tireless work and leadership of people like Cesar Chavez and Delores Huerta has resulted in many gains. For example, the Agricultural Labor Relations Act of 1975, passed after many years of organizing, striking, and boycotts, gives farmworkers the basic rights of unemployment insurance and fundamental health and safety protections, such as access to toilets and clean drinking water. And in 2002, California farmworkers won the right to mandatory arbitration, which allows a mediator to impose a settlement whenever an employer and a certified union cannot come to an agreement.

For farm labor standards to truly change, worker rights must be included in the larger discussion of sustainable food and food justice. If a common mandate of the alternative food movement is to “know where one’s food comes from,” we must add to that a directive to know the farmers and their farmworkers and the conditions under which the workers live and work.

At a march to encourage Boston-area grocers to pay workers 1 cent more per pound of tomatoes, Josh Viertel, president of Slow Food USA, declared: “I am here today because the food movement cannot be separate from the farmworkers movement.”[2] To create a truly just food system, it is absolutely imperative that people who consider themselves conscious eaters make a serious effort to recognize the connection and demand better treatment of food workers at all levels of the food system chain—from the farmworker to the dishwasher.

Currently, there are organizations working to utilize a domestic fair trade model that advances worker rights in the sustainable agriculture movement. The Agricultural Justice Project is a pioneer in this area. Other important players include: Food Chain Workers Alliance, California Food and Justice Coalition, National Farmworker Ministry, United Farm Workers (UFW), and the Coalition of Immokalee Workers.
Concurrent with the union-led struggles for better wages, benefits, and labor standards, we also need to pay close attention to the fight for immigration reform and international policies. After all, the destiny of the farmworker is closely tied to economic conditions at home and the situation at the border.

This article resulted from a panel discussion on “Fair Labor and Food Security for California Farmworkers” at the week-long Food Justice Symposium organized last February at the UC Berkeley School of Law by Students for Economic and Environmental Justice (SEEJ). The authors would like to acknowledge Alegria De La Cruz for her contributions to the panel and to this article. You can view a video of the proceedings at urbanhabitat.org/rpe/foodchain.