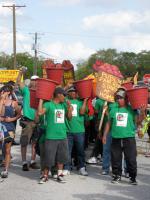 Mariano Lucas Domingo traveled north from his home in Guatemala in search of work to support his sick parent. He landed in Immokalee, Florida, the tomato capital of the United States, where he found work harvesting tomatoes. He expected to earn about $200 a week.  Then Lucas met two brothers who offered him room and board at their family house, in exchange for a cut of his pay. This didn’t seem like a bad deal to Lucas who had no family or friends nearby, and also because the brothers offered to extend credit even when work was sparse.

Lucas spent the next two-and-a-half years living as a captive with other workers in a truck with no water or electricity.1 The workers were forced to relieve themselves in a corner of the truck and wash with a garden hose in the backyard. The brothers locked them in the truck every night, forced them to work even when they were sick or tired, and took away their paychecks. Lucas and his colleagues finally escaped from the truck one night by punching a hole through the roof.2 The two brothers were subsequently arrested and sentenced to 12 years in prison.

This story, unfortunately, is not unusual among the workers who produce our food.  While Lucas’ experience of being enslaved is certainly a horrific extreme, the 20 million workers employed in the food system earn low wages, work in unsafe and unhealthy conditions, and are unable to collectively organize to demand rights at work. Half of all workers in the food system earned just $21,692 a year or $11.05 per hour in 2008.3 That is well below what a family needs to make in order to sustain two children, according to the Center for Women’s Welfare at the University of Washington.4 In a metropolitan area like San Francisco, a family needs to earn around $26.97 per hour just to meet basic needs. In Cleveland, that figure is $20.21 per hour and in Atlanta, it’s $18.37 per hour. Close to one quarter of all food system workers live at the federally defined poverty threshold—earning less than $21,200 for a family of four—as per data gathered in 2008.5

A recent report from the Applied Research Center mapping out the race, gender, and class of the food system shows some sad but not surprising trends:
(1) People of color earn lower wages than whites in comparable occupations within the food system. Half of all white workers made $25,024 a year in 2008, whereas workers of color earned $19,349, or $5675 less. Calculated by the hour, food workers of color earned almost $2.50 less than their white counterparts. The income gap—or race penalty, as it is commonly called—was greater in certain sectors, particularly in food processing ($6.04 less per hour) and distribution ($5.35 less per hour). 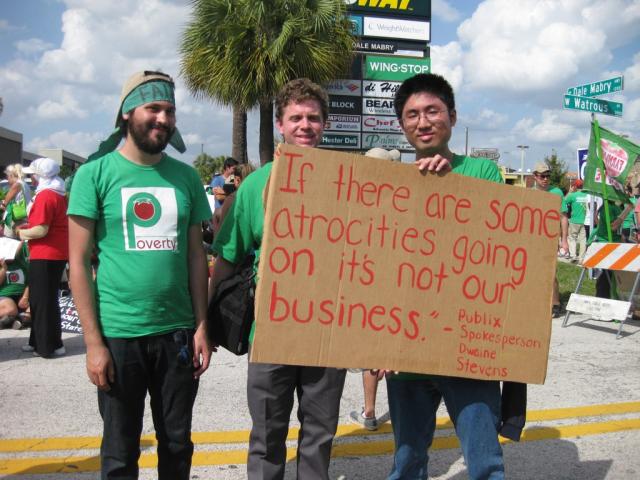 In terms of money, managers earned the most with a median income of $40,544, which is double that of a rank-and-file worker in the food system. Even in management, whites made more than people of color. Additionally, half of all white chief executives made six figure incomes, nearly $40,000 more than their black or brown counterparts.

(4) The food system has some of the most difficult and dangerous jobs. Farmworkers are exposed to toxic pesticides daily and an estimated 300,000 suffer from pesticide poisonings every year.6 Even access to some basic necessities is lacking for many working in the fields. A survey conducted among farmworkers in North Carolina found that only four percent had access to fresh drinking water, hand washing facilities, and toilets.7

According to the Bureau of Labor Statistics, workers in food processing suffered some of the highest rates of injury and illness in 2008.8 Much of the labor in food processing involves repetitive, physically demanding movements using dangerous tools and machinery for which workers often receive inadequate training. Juan Baten, a young father from Guatemala, was crushed to death one night by a dough-mixing machine while working the third shift at a tortilla factory.9 In the opinion of Daniel Gross, executive director of Brandworkers International, Baten’s death could have been avoided if the tortilla factory had been inspected by the Occupational Safety and Health Administration.10

(5) Food system workers are excluded from the right to organize.11 Farmworkers are exempt from the nation’s labor laws, such as the minimum wage and the right to organize into a union, crafted during the New Deal of the 1930s.12 Historically, workers in the fields have been people of color, whether they were descendants of African slaves who worked on Southern plantations or undocumented workers from Latin America. And the architects of federal labor laws, no doubt, found it politically expedient to exclude farmworkers in order to curry favor with white Southern racists.13
This racialized exclusion of workers from basic labor protections now extends from farmworkers to workers dependent on tips and to those formerly incarcerated. The minimum wage for tip-earners, such as restaurant workers, has been stuck at $2.13 an hour for 20 years. A study of low-wage workers in New York, Los Angeles, and Chicago found that 30 percent of those who receive tips were not even paid $2.13 an hour. When workers complained or tried to form a union, 43 percent were subjected to retaliation, such as firing, suspension, or threats to call immigration authorities.

Organized Food Workers Build Momentum
In July 2009, worker-based organizations whose members plant, harvest, process, pack, transport, prepare, serve, and sell food came together to form the Food Chain Workers Alliance.14 Their mission is to build a more sustainable food system that respects workers’ rights, is based on the principles of social, environmental, and racial justice, and in which everyone has access to healthy and affordable food. The Alliance is currently engaged in building solidarity among food system workers with the idea of identifying shared worker concerns and goals.
Members of the Alliance gathered in early March in Florida, close to the tomato fields where farmworker Mariano Lucas Domingo was enslaved for two-and–a-half years. They came to lend their support to the Coalition of Immokalee Workers’ campaign, Do the Right Thing, which targets the Publix supermarket chain for refusing to pay a penny more for a pound of tomatoes.15 Workers from Alliance member groups, like the Northwest Arkansas Workers’ Justice Center and Chicago’s Warehouse Workers for Justice, joined the picket line outside a Publix store and marched with thousands of farmworkers and their allies for living wages for everybody.

Yvonne Yen Liu is a senior research associate at the Applied Research Center (ARC) and a frequent contributor to ARC’s Colorlines.com.