Class, Race, and the Attacks on Public Employees 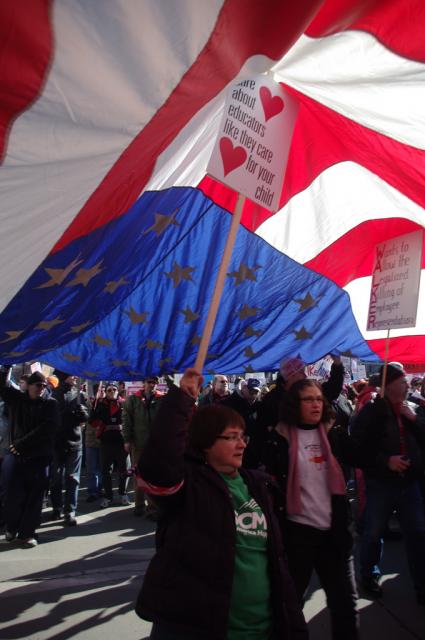 When Wisconsin Governor Scott Walker and the state’s Republican-dominated legislature tried to steal collective bargaining rights from public sector workers—using a phony “budget crisis” as a pretext—they triggered a national uproar. Labor and community activists around the country understood that these attacks not only shred union rights, but threaten to widen the chasm of economic and racial inequality as well.

Several other states, including Michigan, Ohio, and Florida have faced similar legislative battles.  After Michigan passed a comparable law on March 16, 2011, Governor Rick Snyder used his newly expanded powers not only to attack unions but to disenfranchise the entire population of Benton Harbor—10,235 people, 85.5 percent of them Black. Workers in Ohio are organizing a referendum to overturn Senate Bill 5, their state’s version of the Wisconsin legislation.

Republican legislators in Florida are trying to ram through a bill to prohibit public employees from having payroll deductions for union dues. In response, police and firefighters’ unions have pulled money from banks that support the Chamber of Commerce, which is pushing the bill.

Workers in all these states are facing a larger trend that has been weakening their power for decades. Relentless corporate pressure and ineffectual labor laws have steadily eroded union membership since 1955. As the percentage of workers in unions has shrunk, income inequality has grown. The result has been an economic gulf, separating the rich from everyone else.

The top 10 percent of U.S. households own nearly three-fourths of the country’s total wealth; 34 percent is held by the top one percent alone. Some among this very wealthy elite have a profit-lust so insatiable that it is causing the American middle class to fade from existence, as income stagnates and the unemployment crisis continues. 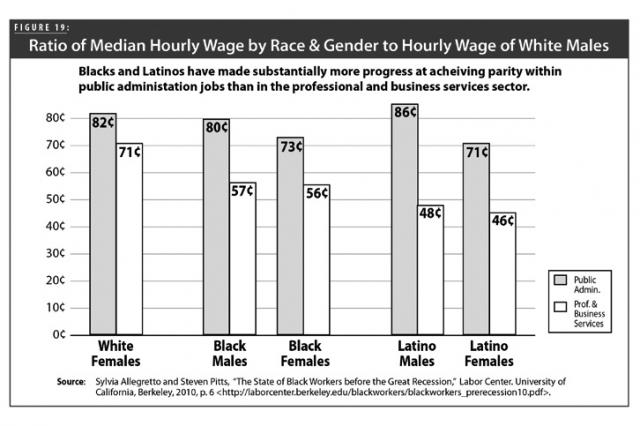 Not only does workers’ share of the wealth shrink when they cannot bargain with their employers, but their political voice gets weaker as well. At its best, the American labor movement has campaigned for policies that benefit us all, like the eight-hour day, workplace safety rules, a higher minimum wage, and a national health care system. If right wing governors succeed in their anti-union crusade, we could face a system-wide shift that would further mute the voices of average workers.

Who Stands to Lose the Most?
The drive to break down public sector unions will be especially harmful to those who already face a constant battle against workplace discrimination.
A recent report by United for a Fair Economy, State of the Dream, emphasizes the vital role of the public sector in providing opportunities to people of color, who are burdened not only with the residual effects of past injustices, but also contemporary barriers to upward economic mobility. (See excerpts on page 28.) With its more stringent equal opportunity and civil service protections, the public sector offers more agreeable circumstances for historically disenfranchised workers than does the private sector. For example, the public sector has offered more opportunities for women and workers of color to approach income parity with white men. (See graph on page 28.)

Today, Black workers are significantly more likely than other groups in the workforce to hold government positions. So, across-the-board cuts to the federal, state, and even local budgets would have particularly ruinous effects on Black workers and their communities.
If we are ever to move beyond a jobless recovery and meaningfully address racial inequality, we must preserve the public sector by funding a jobs program that invests in our people and in the longer-term stability of our economy.

Where is the Money?
The phrase “we’re broke” as a rationale for bone-deep budget cuts is not just tired, it is wrong. We are not broke. We are still a very wealthy country, but too much of our wealth is concentrated in too few pockets.

The money for a jobs program and other recovery measures exists, but we have to put policies in place to reverse this concentration, such as: 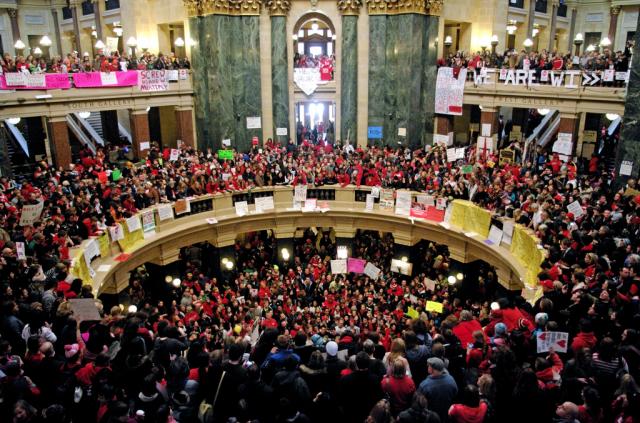 The money saved could be more wisely applied to domestic investments, which should be made using a targeted approach that would address the chasms of race and class in the U.S. To do so, we will need to establish a shared agreement about the type of society in which we want to live. Will it be one that encourages greed and inequality, or one that provides essential services and opportunities to all of us? Will it be one that provides access to only the rich, or one that’s truly democratic? Will it continue to pit us against one another, or will it inspire togetherness and community?

Although, historically unions have not been free of racism, it would be counterproductive to target them for a legacy of discrimination that belongs to the nation as a whole. We should embrace the real hope that the civil rights and labor movements can strengthen their relationship and move forward as a more diverse, inclusive and, most importantly, unified movement.

Ironically, it may well be Governor Walker’s outrageous attacks on public employees that ignites the very movement he seeks to destroy, and brings the U.S. toward a more just and egalitarian society.

State of the Dream: Right Wing Attacks Public Sector
Federal and state budget shortfalls are being used to justify large-scale cuts in the public sector workforce—and this attack, spurred by the right wing, equates to an attack on Black and Latino workers.

In the two years prior to September 2009, more than 110,000 state and local jobs were lost, including 40,000 teachers and 4,000 uniformed police officers and firefighters.[1] More cuts are expected in the year ahead.
• Forty states are already projecting budget gaps for the coming year totaling $113 billion. Once all state budget estimates have been prepared, total deficits will likely exceed $140 billion. These projected deficits compound the effect of the deficits that states faced in both 2009 ($110 billion) and 2010 ($191 billion).[2]
• State governments, with the exception of Vermont, cannot run deficits. To balance their budgets, states across the nation have instituted large-scale layoffs of public employees, along with furloughs and pay freezes for many who remain.[3] New Jersey and Tennessee, for example, each eliminated over 2,000 state positions in their fiscal year 2011 budgets.[4]
• Many cities and local governments are making the same shortsighted decisions. Recently, Newark, New Jersey adopted a budget that includes 850 layoffs of city employees.[5] Over the last two years, the Los Angeles school system alone has laid off about 2,700 employees.[6] We may see large-scale layoffs at the federal level as well.

While public sector jobs pay less than those in the private sector once education differences are factored in,[7] public sector employment offers better opportunities for Blacks and Latinos to advance professionally and to achieve greater economic parity with their white counterparts. White men continue to dominate top-level positions in the private sector,[8] but Blacks and Latinos have made greater progress toward the attainment of top-level positions in public administration.[9] This is due in part to higher levels of union representation in the public workforce,[10] and to civil service protections that help to ensure that hiring and promotions are merit-based.

The median hourly wage of Black and Latino workers in the public sector is closer to the median hourly wage of white men in the public sector than it is in the private sector. In the professional and business services sector, Black men earn 57 cents to each dollar earned by white men. In public administration, Black men earn 80 cents to each dollar of earned by white men.[11] This trend of greater parity in public administration jobs is also true for Black women, Latinas, Latinos, and white women.
Tightening austerity measures and shrinking government will place roadblocks on this path to advancement for people of color, while also reducing the nation’s capacity to meet its broadly shared objectives.